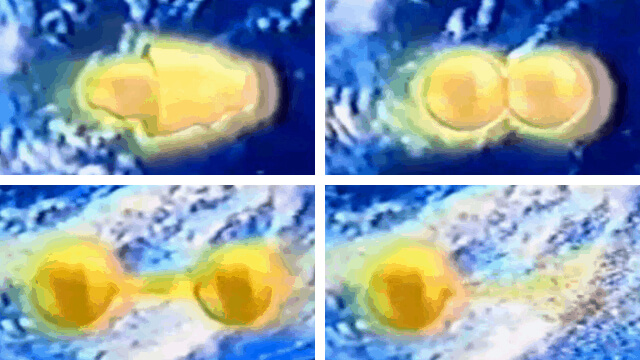 jublywubly
This video has some interesting information about Russian Cosmonaut UFO sightings & N.A.S.A. Astronaut, Dr Story Musgrave, discussing his own encounters in space.

Several astronauts reportedly claimed to have seen UFOs in space. Since Yuri Gagarin went to space, not every astronaut has had a normal spaceflight experience. Some had seen phenomena that are far beyond the experience of people on the planet Earth.

On May 5, 1981, Retired Russian cosmonaut Vladimir Kovalyonok saw something remarkable from the porthole of Salyut 6. According to Kovalyonok, at around 6 p.m., when the spacecraft was flying over South Africa moving towards the Indian ocean, he saw an elliptical-shaped object that was flying along with the spacecraft. From the frontal view, it looked like it would rotate in flight direction.

“The object resembles a barbell. I saw it becoming transparent and like with a ‘body’ inside. At the other end I saw something like gas discharging, like a reactive object. Then something happened that is very difficult for me to describe from the point of view of physics,” Kovalyonok said.

He further added: “I have to recognize that it did not have an artificial origin. It was not artificial because an artificial object couldn’t attain this form. I don’t know of anything that can make this movement… tightening, then expanding, pulsating.

Then as I was observing something happened, two explosions. One explosion, and then 0.5 seconds later, the second part exploded. I called my colleague Viktor [Savinykh], but he didn’t arrive in time to see anything.”

He explained: “the object moved in a suborbital path, otherwise I wouldn’t have been able to see it. There were two clouds, like smoke, that formed a barbell. It came near me and I watched it.”

Subsequently, they entered into the darkness (terminator or twilight zone) for some time after the incident. When they came out of the zone, the two spheres never returned.

Kovalyonok described a soft conical form with the inner tube that suddenly appeared as two connected globes. The two globes then drifted apart with a line connecting them, then the first one and then the other one faded.

American space journalist Jim Oberg tried to solve Kovalyonok’s encounter but nothing was added up. He speculated that the phenomenon Kovalyonok witnessed could be produced during secret missile tests and far-away rocket launches. Below about 100 km, rockets leave trails much like aircraft vapor trails. But once they are above an altitude of 100 km, their exhaust plumes billow out in the vacuum of space.

According to him, “they are translucent, glowing, constantly shape-shifting, and disappear completely within minutes.”

Unfortunately, no rocket or missile test was recorded that day. Although Kovalyonok believed that it was an artificial terrestrial object, the mystery is still unsolved.

Another bizarre claim was made by cosmonaut Victor Afanasyev. After the collapse of the Soviet Union, Afanasyev dared to tell his story. In April 1979, he lifted off from Star City to dock with the Soviet Salyut 6 space station. But while en route, something strange happened. He saw an unidentified object that turned toward his craft and began following it through space.

“It followed us during half of our orbit. We observed it on the light side, and when we entered the shadow side, it disappeared completely. It was an engineering structure, made from some type of metal, approximately 40 meters long with inner hulls. The object was narrow here and wider here, and inside there were openings. Some places had projections like small wings. The object stayed very close to us. We photographed it, and our photos showed it to be 23 to 28 meters away.”

In addition, Afanasyev said that they photographed the craft and continually reported back to Mission Control about its size, shape, and position. When the cosmonaut returned to Earth, he was debriefed and ordered not to talk to anyone about it ever. His cameras were confiscated. Those photos and his voice transmissions from space have never been released.