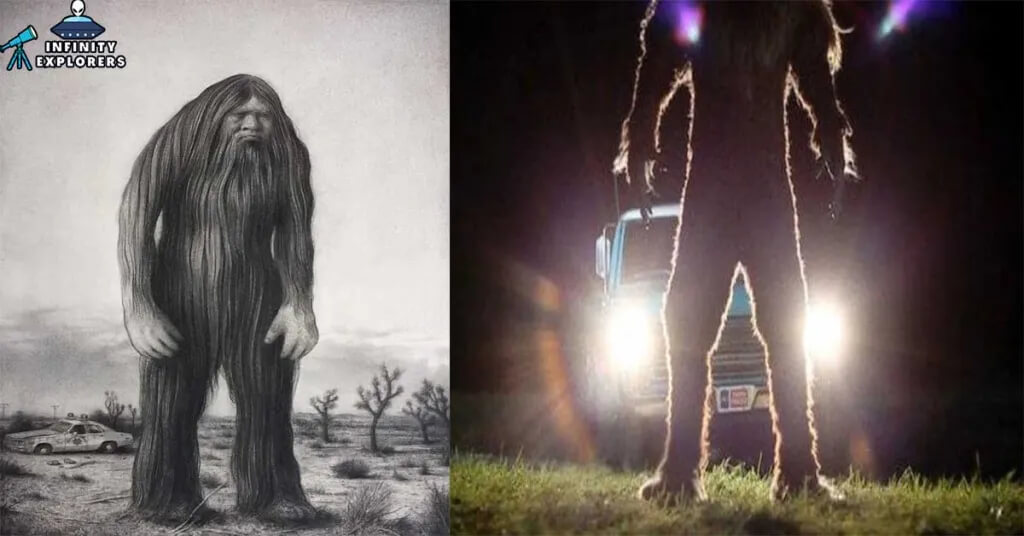 Legends of large, ape-like beasts can be found all over the world. These ape-like mythical creatures are known as Bigfoot or Yeti, who is believed to be living in the Himalayas. One such humongous and hairy creature is also believed to be existing between us, known as the Yucca Man.

However, there are only a few people who know about this similar figure that has been spotted several times in the area around the Joshua Tree National Park in Southern California. The beast was allegedly sighted for the first time back in 1971.

Earliest Reports of Yucca Man in1971

The first sighting of Yucca Man has been reported by a source that is extremely rare when it comes to paranormal incidents. A marine guard on duty at the base in Twenty-nine Palms was discovered unconscious and his rifle half bent in the morning after his shift.

The man was barely in his senses, however, he still managed to report that he was confronted by a huge man, who appeared out of the dark. As the creature began to approach the marine guard, he found that the creature was extremely hairy.

The marine guard commanded the massive hairy creature to stop and lifted his rifle against him. In response to it, the creature snatched the rifle from him, bent it in half, and knocked the marine guard unconscious.

Both the FBI and CIA were brought on board to investigate the matter. It was reported that there were two similar sightings of the same creature that night. It was registered in the report that the huge figure was accompanied by a little similar-looking creature in one scenario. The figure was reported to be at least 12 feet tall.

It was also reported that the dogs residing in that particular area barked all night to alarm their owners. The unusual barking of the dogs suggested the presence of something unnatural in the neighborhood. The very same year, sightings of a massive, hairy man were communicated by employees working at Joshua Tree.

The Sightings Of Yucca Man After 1971

In 1979, a couple reported that their car journey was interrupted one night by a massive-hairy man near their condominium in Desert Hot Springs. The creature stepped out from the Yucca bush and stood in front of the car.

The chest of the creature was described to be as large as a refrigerator and its arms were hanging down below its knees. The Yucca Man was covered in long-tan hair and within seconds it went into the dark bushes.

Yucca Man was once again spotted in the same year at Hemet, California and there he left behind certain evidence in the form of footprints. The discovered footprints were 17 in total. Interestingly, the footprints were a foot and a half long and six feet apart. The area was later searched by two renowned Bigfoot researchers to support the theories but the efforts went in vain.

An urban legend based on the Cement Monster is widely known in the Lucerne Valley. It is believed that the alleged monster lives in a deserted factory. The monster was first witnessed by two servicemen in 1988, who were returning from the lake. It was communicated by the servicemen that the creature was huge and only its lower body was visible to the servicemen, while the creature crossed their car.

One of the servicemen, Ken Fox says that:

“I used to be stationed at Twenty-nine palms from ’86 to ’89. I spent a lot of time in the Joshua Tree Monument, but never saw anything of real interest if you know what I mean. Where I did see something was with my Marine buddy Mike, in the spring, March of 1988 after leaving Big Bear Lake.

“We had been snow skiing all day at Big Bear. Now as you probably know, the quickest way to get back to Twenty-nine palms is to take the shortcut route through the desert, I believe it goes through or very near Apple Valley. It eventually comes in the back way to Yucca Valley after passing through Landers.

“Yes, now you know the highway right? Okay here goes one of the coolest things that I ever saw during the 1980’s! Mike and I had just left Big Bear. It was about 9:00 p.m.

“We were completely down from the mountain and just entering the desert, still kind of going downhill. On the right hand side of the road there is a cement factory sort of all by itself. There isn’t any civilization around for about 10 miles or so which isn’t uncommon for the Mojave Desert.

“Mike was driving, I believe I saw it first. From the left side of the road something very large seemed to stand up on two legs and run across the road. The bottom half looked human covered with hair, the top half wasn’t very visible, but appeared monsterish, scary in other words.

“The headlights only got the bottom half, and the damn thing ran out about 150 feet in front of us. It made it across the road in three strides. I distinctively remember seeing the arms pumping back and forth just like any of us would do if sprinting across the road in front of a car. It appeared to be 8 feet tall.

“Now for the interesting part. I didn’t say anything, I just kind of glanced over at Mike. He just kind of glanced back at me. Then we both looked right at each other, “What the Hell was that!” I said, “That was the Cement Monster, after him!” Mike slammed on the brakes and turned around.

“I started digging through the glove box looking for his wife’s pistol. I said, “Go down that dirt road,” still looking for the pistol. About 300 feet down the dirt road was the old cement factory, but no sign of the thing that ran out in front of us. So we drove around a little but didn’t see it.

“We talked about it a few times before our enlistment’s were over. The strange thing is that we just accepted that we had simply seen some sort of a prehistoric man, and that was that, and it was no big deal, and maybe some day we might be privileged enough to see another.”

Though it is difficult to decide whether Yucca Man is merely an urban legend, a paranormal being, or a wild creature that has mostly eluded the gaze of humans is unknown. However, one day, the truth might be discovered and it will be known to us, that what exactly these creatures are and where are they from.