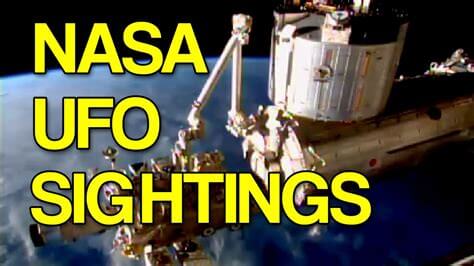 Shocking NASA UFO Sightings in space on Tape Revealed! Raw official footage from NASA space missions filmed by astronauts… In 1996 NASA Mission STS-75, on the Space Shuttle Columbia, inadvertently discovered some compelling UFO evidence only 300 miles above our planet, in Earth’s outer atmosphere. UFOs, whether alien spacecraft or unknown cryptid creatures, are seen by us here on Earth , but also prevalent in our outer atmosphere, hiding in spectrum’s of light invisible to the naked eye. Are they alien spacecraft? Or possibly intelligent life (aka “creatures” or “critters” or maybe even extraterrestrials)? Trevor James Constable, a well-known non-fiction/UFO writer, who also is convinced that supposed UFOs are in fact living organisms, explains what was discovered during NASA’s Mission STS-75 in early 1996. Trevor shares his amazement on how the UFOs are traveling under the 12-mile-long broken tether (which proves these sightings are not dust or particles in the space shuttle), which show just how huge these crafts or creatures really are. He also points out how the behavior of these unidentified flying objects in space matches that of reports on Earth; how the UFOs materialize out of nowhere, as well as, dematerialize into thin air. He explains how these UFOs are not visible to the naked eye and can only be seen in special light spectrum’s or with a special camera lens, ie; ultraviolet or infrared. Additional NASA UFO footage from Space Shuttle Discovery and more, showing even more outer space UFO sightings caught on tape by astronauts, and not by Country Joe holding a VHS camcorder. Note the pulsating lights on these UFOs, the materialization and dematerialization of the UFO crafts/critters and and that they are actually flying BELOW the 12-mile-long tether which, in this video, is 77 nautical miles away from Columbia.