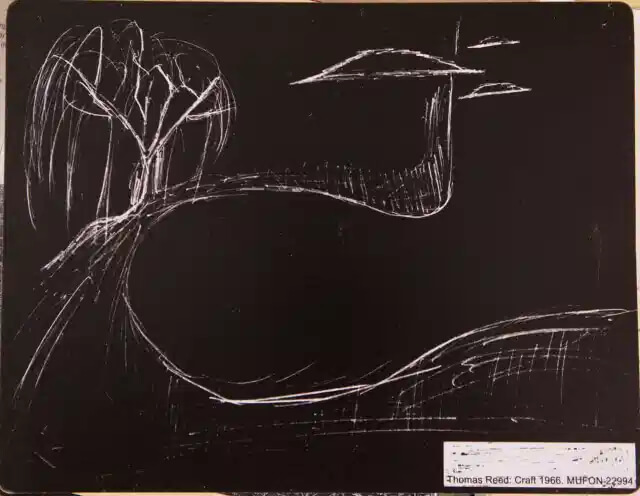 New England Public Media
How do you commemorate a big UFO historical event, when no one is sure what the event actually was? That’s the question some are grappling with in the town of Sheffield, MA, nestled in the Southern Berkshires. Connecting Point’s Adam Reilly has more on the controversial Sheffield UFO Encounter Memorial, commemorating what some say was a UFO.

The Berkshire UFO Sightings is a historical event that took place in Massachusetts in 1969. Mass UFO reporting and abduction events have made this case intriguing in the United States. Berkshire County has a history of documented UFO encounters beyond the September 1, 1969 incident. Although around 40 people claimed to have seen the sighting, the story shared by Thomas Reed who was only nine years old at that time grabbed the interest of many individuals.

Unfortunately, no media house and no newspaper covered the  UFO incident that happened on the night of September 1, 1969. Only the host of radio station WSBS Tom Jay collected information from the witnesses, received calls, and shared their individual experiences, but no one thought to save the broadcasting for future evidence. The testimonies given by the witnesses played an important role in the Berkshire UFO Sightings.

The  UFO incident involved the abduction of four families who claimed to have been taken by UFOs. Thomas Reed is the most prominent eyewitness in this case. Reed said that on the night of the experience, his family including him, his brother, mother, and grandmother were crossing the Sheffield Bridge by car and going back home.

He said his grandmother saw some light coming up to them from behind the trees while he was busy giving his younger brother candy.

“We all looked at it because it was kind of a self-contained glow. It rose up a little bit. It looked like it followed the dirt road, which I’m sure it probably didn’t, but it appeared that way because we could see it through the trees. The light started to bleed through once we broke into a little bit of a clearing. We could see inside the car so the light was flooding inside the car,” Reed said.

He added that his family saw an amber glow emerged on both sides of the road. There was dead silence as if they were in the eye of a hurricane. Then he remembered being taken to a hangar-like place. He said that they encountered something that was not from this world. Again, this is very familiar scenario from similar UFO cases

“We had a black and white television at the time and the imagery that we saw on this thing was unbelievable. There were lights that looked like fluorescent tubing inside this hangar. This hallway we had seen was circular with a Y-configuration almost to control the flow of traffic. This one-room had a bowed-in wall that was rounded. This was not something that you would have seen in 1969 anywhere else. I have no idea where I was, but I know that what I saw was very different than anything I’ve even seen today 50 years later,” he recalled.

Before he could understand what had happened, they were back inside the car. Soon, they realized that they were gone for 2 hours. Missing time is typical of these type encounters.

It was not Reed’s first UFO encounter. Before the 1969 abduction, he recalled being taken on board an alien spaceship with his younger brother Mathew in 1966 and then again in 1967 from his bedroom.

Another witness named Tom Warner also said that he missed several minutes after a beam of light hit him. Moreover, he claimed to have seen a young girl named Melanie Kirchdorfer boarding a UFO, who was only 14 years old at that time. In her interview, Melanie remembered seeing Reed in her ship. This is amazing and similar to other Contactees Experiences.

There is another witness named Kevin Titus who shared another interesting story of that night. He went to search for two missing cows with his friend that night in Great Barrington and found their dead bodies, but there was no blood at the scene. Then the two of them were hit by bright lights and saw a saucer-shaped UFO that was flying silently. They told about it to parents who also saw lights and a UFO over their farm. They also informed the radio and the police. The military denied having sent any of their aircraft but they recorded something odd on their radars. That usually happen, unfortunately and a Contactee is left  bewildered.

One of the sketches made by the children who witnessed the UFO is on display in the Roswell Museum. In 1992, this case was discussed in the United Nations, where the organization thought about making a unit of study UFOs. According to Reed, his father died under mysterious circumstances. He was planning to write a book about the experiences of his family.

The Great Barrington Historical Society recognized 1969 sightings officially in 2015 and decided to add Reed’s story into their archives after finding numerous witnesses who shared similar stories and written records provided by WSBS. The Unsolved Mysteries released an episode on Berkshire UFO Sightings in July 2020 on Netflix. I think it would be a great ideal to watch this.