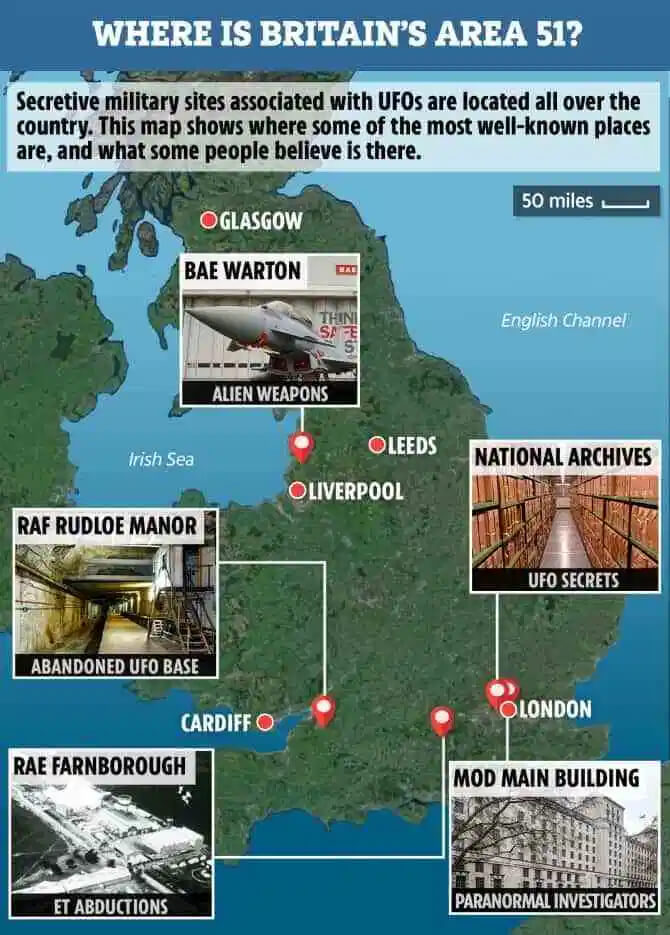 For decades, many alien & UFO stories have been evolving around Area 51 situated in the US state of Nevada. Hundreds of people were even ready to storm the area in September 2019. Everyone knows about this secret US military base but do you know that the United Kingdom has also its secret spots that, according to Nick Pope, could be Britain’s Area 51?

Britain also has a history of intriguing UFO sightings, including the Rendlesham Forest incident (1980) and the Berwyn Mountains incident (1974). From the early 1950s until 2009, the UK’s Ministry of Defense investigated the UFO phenomenon and later released the secret files containing information regarding the cases. According to a 2009 UFO report, around 1000s of strange aerial phenomena had been recorded in the UK. Apart from it, Nick Pope, who ran a secret program to track UFOs and study them under MoD in the 1990s, shared top-secret places of the UK where the government might have been monitoring UFOs and alien abductions.

Pope said that once, he had been filming a documentary at RAF Rudloe Manor with famous ancient alien theorist and TV presenter Giorgio Tsoukalos when suddenly they were approached by the military.

He said: “As a former MoD employee I didn’t feel it was appropriate for me to approach the site, so Giorgio went alone. Within moments, military police turned up and halted filming, further fueling the conspiracy theories.”

Son, why is RAF Rudloe Manor so secretive in nature? In 2010, MOD released UFO documents where it was admitted that the site was used for UFO investigations. Further, it was disclosed that the site had a vast network of underground tunnels that were created in the 1930s for mining. Later during World War II, the tunnels were used by Royal Air Force (RAF) as a shelter.

Now, the mystery around Rudloe was created when American journalist Dorothy Kilgallen wrote about the 1940s crash and linked it to UFO. She had no physical proof but claimed that she had received a piece of information from an anonymous high-ranking British official about the strange incident that happened at Rudloe.

It is believed that a similar incident like Roswell also happened in Britain when a spacecraft along with an extraterrestrial recovered by the government and was taken away to a secret place which later rumored to be Rudloe Manor.

Ancient Aliens’ Episode 3 of Season 12 is dedicated to the mystery beneath Rudloe Manor. Kilgallen had died under mysterious circumstances that fueled this conspiracy. People started connecting her mysterious death with Britain’s UFO protocols and JFK’s killer. On the official record, she died of a drug overdose.

According to Pope, Rudloe Manor is connected with UFO sightings, and the site is situated at the center of Wiltshire county. It is the same place where Avebury Henge and Stonehenge are situated, and both of these structures are even older than Egyptian pyramids.

The next place Pope suggested is Room 8245 inside the MoD Main Building in Whitehall. He said that in 1995, around 20 people stormed outside the building, demanding to reveal the truth about UFOs.

“Around 20 people assembled outside Parliament and then marched over to Main Building, waving signs that said ‘UFOs are real’, before handing in a letter demanding an end to UFO secrecy.”

The chief US correspondent of The Independent Andrew Buncombe wrote that in Room 8245, there was a telephone answering machine that was placed to record the UFO sightings report from the public. During that time, the MoD was only interested in the UFO that could pose a serious threat to national security. They received hundreds of calls from the people who cliamed to had seen UFOs or strange lighting phenomenon. MoD even installed a huge radar at RAF Fylingdales in North Yorkshire to track UFOs.

It was rumored that Royal Aircraft Establishment was allegedly a secret base for UFO activities and alien technology.

Nick Pope did not deny that RAE could be a secret place to keep alien technology but at the same time, someone told him that “there were no UFO weapons there.”

“Is there a British Area 51? Yes and no. Exotic – but decidedly terrestrial – aviation technology has been designed and tested at RAE Farnborough, the BAE Systems site at Warton, and a handful of other locations. But geography is against us Brits. The comparatively small size of the UK means that there simply isn’t space to do what the Americans do. We don’t have deserted areas of hundreds of square miles where we can test fly our shiny new toys in private.”

In 2015, British Earth and Aerial Mysteries Society (BEAMS) claimed that Farnborough had alien abductions and UFO sightings that might have been connected to the alleged secret base. The group released a 100-page report based on the alien cryptic symbols on the site, alleged intelligence service whistleblower testimonies, and the responses from psychic researchers. They were convinced that the site held the secret involvement of aliens, UFOs, intergalactic defense, and futuristic flight development.