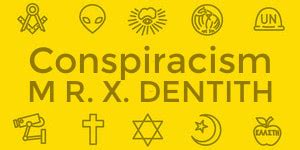 In an interview last week with radio host Jimmy Church, which stretched into hours of familiar conspiracies, former America Unearthed host Scott F. Wolter claimed that an agent of the United States government had contacted him to help publicize the disclosure of UFO secrets. “We want to talk to people who are considered credible,” Wolter alleged that a government agent told him. “That’s why they reached out.” Wolter said that over the past five years he has become convinced that space aliens are visiting the earth, that they walk among us, and that the government knows about it. He declined to provide details about what “the military and the government” want him to disclose, but he said that the military’s disclosure plans have been put on hold due to Pres. Trump’s erratic behavior and domination of the news cycle. “The government is frustrated by that,” Wolter claims. “There’s a reason they want people to know.” Therefore, they logically chose a failed former cable host with a third-rate blog to reveal the most momentous story of discovery in human history.

Wolter declined to offer details about the individual who contacted him but claimed to have inspected his government identification. He claimed that the individual provided him with government documents, already in the public domain, that he had never seen but that “people just don’t know what to ask for.” The “inside” also asked Wolter to watch cable and online UFO documentaries for “proof” that UFOs are extraterrestrial craft and have crashed in locations around the world. Wolter previously investigated space aliens in last year’s revival of America Unearthed on the Travel Channel, where he expressed his belief in prehistoric alien arrivals and declared a modern hoax carving of the xenomorph from Alien to be prehistoric evidence of extraterrestrial contact.

Wolter alleged that the government became interested in him because of his work on “lost history.” He said that members of the military and the government appreciate his forceful advocacy for traditional American values, particularly the (fictitious) Templar principles that the Freemasons allegedly inculcated in the Founding Fathers.

“The message I’m getting is that they’re here,” Wolter said of the aliens. He added that the extraterrestrials feel that humans are too numerous and our numbers are destroying the planet, in which the aliens are invested. “They don’t like it, so we have to change the way we’re doing business,” Wolter said. “We’re in trouble. We need to sober up fast,” he added, “or the end isn’t going to be good.” He said disclosure is about preventing a climate catastrophe, and he added that space aliens are concerned about nuclear weapons and will not allow humans to destroy themselves with H-bombs. “This is serious shit,” he said.

Wolter said that he had not decided whether to help with the disclosure project, but he is increasingly likely to pursue UFO conspiracy theories and investigate UFO mysteries in order to make the world a better place. Wolter said that while he had no background in ufology or ancient astronaut theory, he would pick it up quickly, the same way he learned all of history by reading pseudo-history books and watching History Channel documentaries.

Wolter claims that he is “humbled” to have been chosen as a disciple of disclosure, to heal the Earth with the help of the government and alien saviors.