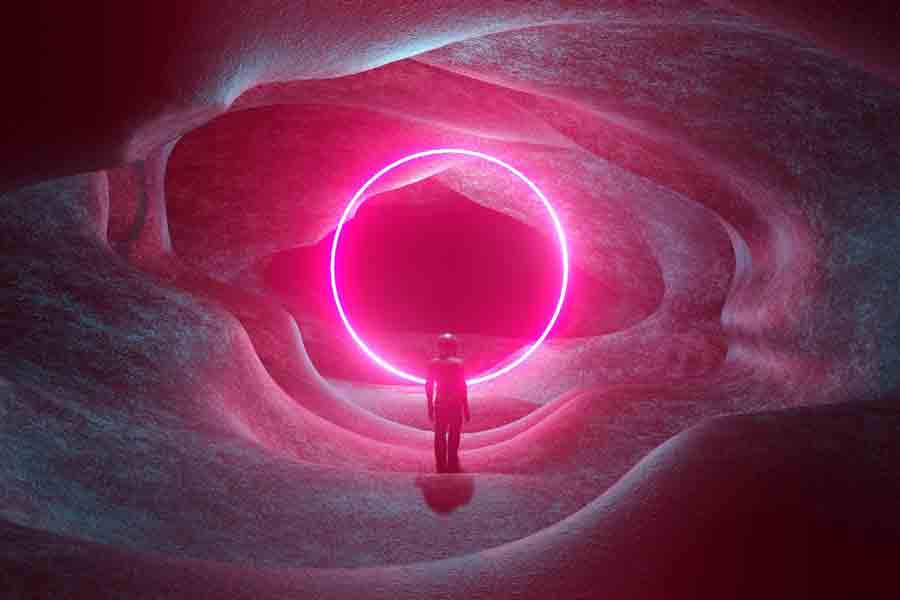 Located in the city of Anuradhapura, Sri Lanka, the so-called “Stargate of Sri Lanka” is a mysterious place with much that is yet to be unveiled. There are many stories about UFOs and other strange happenings around this location, known popularly by its local name, Rajarata, or “The Land of Kings.” As of today, the researchers have taken significant steps to gain knowledge about at least some of the mysteries here.

The first complex that was established on this land was in 377 BC, the ruins of which are a UNESCO World Heritage Site. This complex was situated at the heart of Buddhist culture in Sri Lanka . Today, this destination is popularly visited by tourists from all across the globe. The devotees and pilgrims come to visit the ancient Buddhist temples and dome stupas that exist here.

Tourist Hotspot with More than a Few Mysteries

The complex is not just famous for its architecture. Instead, it has something more profound and precious. There are lots of secrets hidden underneath this mysterious location and researchers are keen to shed light on them all. The wider complex has mysteries also: Ranmasu Uyana or “Golden Fish Park”, a 40-acre (16 hectare) ancient park situated around this location, consists of three Buddhist temples. It contains an apparent map that seems like a guide for mankind to unlock the secrets of the universe. 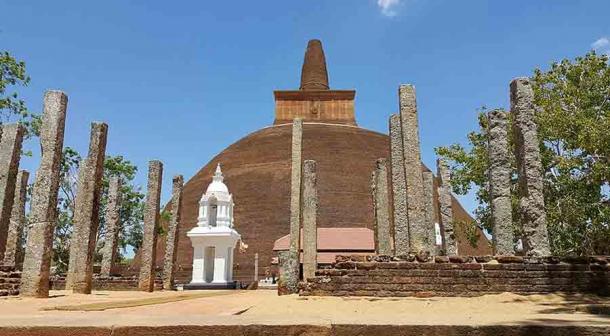 This chart or map is named as “Sakwala Chakraya” which translates in Sinhalese as “Universe Cycle.” It is 1.8m (6ft) in diameter and carved onto a rock face within the park ruins. The front facade of Sakwala Chakraya can only be seen from ground level. Not just that, but right opposite to it, you will find four seats that are carved out of flat rock, making it a perfect viewing area. The origin of these rock seats and the chart is mysterious, yet to be unveiled.

The presence of this map and the seats has amazed archaeologists and puzzled professional historians for over a century now. To date, very little information has been accumulated about this chart and the purpose of its existence. The professors at the Sri Lankan archaeology departments of many universities believed that Ranmasu Uyana is home to many historical secrets.

Based on current research, there is a definite possibility that this carving was made during 7th Century AD. This would fit with a known major developmental phase which commenced in the 7th Century AD, with new buildings added to the garden layout of Ranmasu Uyana. However, this remains just a working hypothesis based upon relevant research. There is no verdict on it because no historical records possessed by Buddhist monks have mentioned its existence or function. 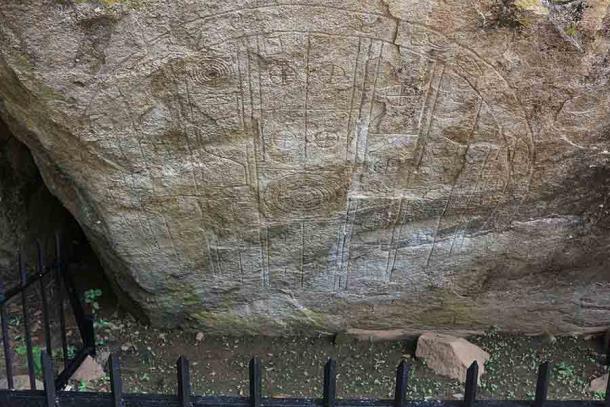 With further research and analysis, some discoveries were made about the carving itself. The iconography of this chart is incompatible with any other carvings of the historical Anuradhapura period, which ranges between the 3rd to 10th century AD. Moreover, all other carvings noted during this period are nowhere similar to that of Sakwala Chakraya.

On detailed inspection of Sakwala Chakraya, the researchers concluded that this chart is made up of 7 concentric circles that are then divided with the use of parallel horizontal and vertical lines. It also consists of small rectangular components containing smaller crossed circles. There are some subtle symbols within the map that resemble a kite, wavy textured lines, cylindrical shapes, bows and arrows , and even umbrellas. These figures are so subtle that no untrained eyes can observe them easily. Other figures appear to be depicted in the outer ring of Sakwala Chakraya, such as seahorses, turtles, and fish. 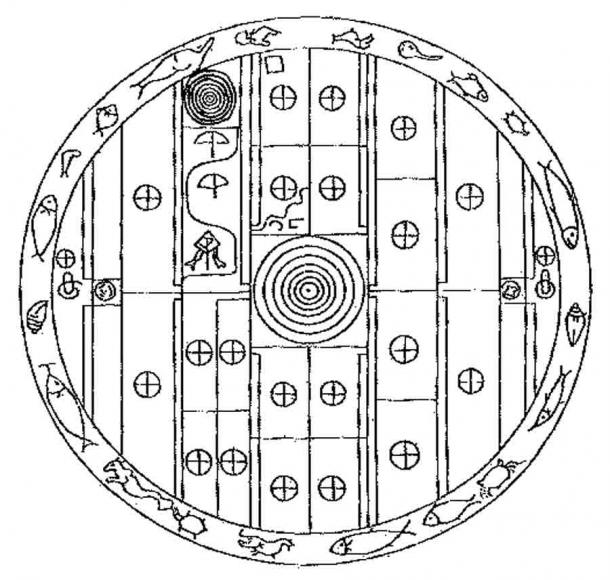 Sketch of the Sakwala Chakraya in Archaeological Survey of Ceylon, 1901 ( lakdiva.org)

None of these carvings match typical Buddhist iconography. For instance, one of the comparisons was made with Sandakada Pahana, Buddhist semicircular stone slabs. These well-documented artifacts are usually to be found with lotus, swans, and vines carved on them. There is nothing like this on Sakwala Chakraya, and its origin remains obscure. 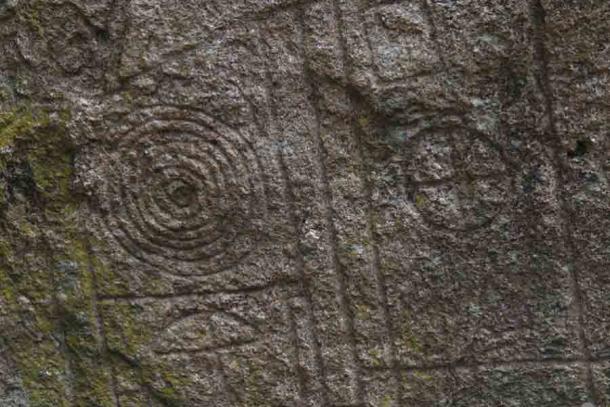 The first academic who identified the archaeological importance of Sakwala Chakraya was a British civil servant, H C P Bell. He was the first Commissioner of Archaeology of Ceylon, as Sri Lanka was formerly known. He added a description to his research upon the chart in 1911, that said that Sakwala Chakraya was amongst the oldest artifacts he had seen, and was interesting to work upon. He also said that this chart testifies to the astronomical cycle being followed by Buddhist monasteries across Sri Lanka. He presented this report to the Governor of Ceylon.

Bell’s conclusion was that this was a cosmological chart and was simply illustrating Buddhists’ belief in the universe. He also concluded that it may be extremely old. He interpreted the circles, marine life, and symbols present on the chart, following Buddhist logic and beliefs, to represent Earth, the seas, outer space, and the universe.

Before the internet was a thing, Sakwala Chakraya was known to very few people, and as a result, even local Sri Lankans were uninterested in it. This chart and the surrounding gardens were abandoned after the Anuradhapura Kingdom lost its might, unpreserved and unresearched.

However, things have changed. Sakwala Chakraya is now a big tourist attraction. The partially restored surroundings have bathing pavilions and twin ponds, with stories that kings of the past used them. Today, this sacred ground of temples is covered and hidden in a tropical jungle and is mostly uninhabited, the location protected by the authorities. 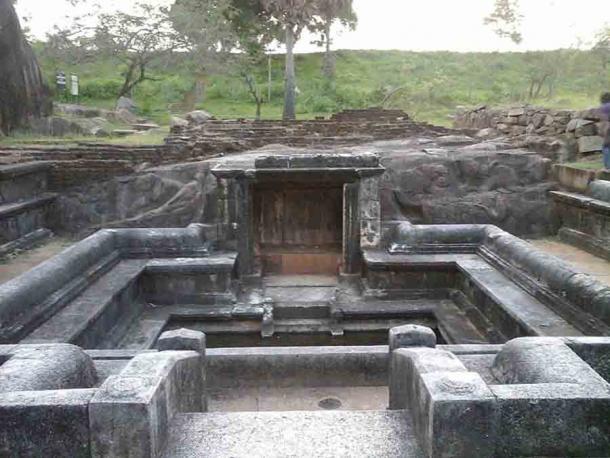 The internet has also enabled new discussion and new theories on Sakwala Chakraya, with the photographs of this location being shared over social media platforms for quite a few years. As a result this mysterious location became well known. One theory arising from internet discussion is that this is an ancient “stargate” that allows humans to travel across the universe. The theory says that the chart may even hold a secret code or technique for unlocking this portal to the universe.

All Sorts of Theories

Some claim that similar symbols and shapes to those found on Sakwala Chakraya have been seen at Abu Ghurab in Egypt, and La Puerta de Hayu Marca , Peru. All three locations are also situated near water. The theory goes that these sites allowed terrestrial beings to process gold from water. 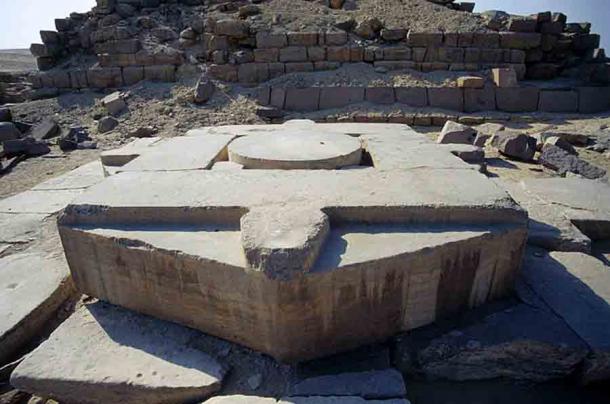 Sakwala Chakraya is also in close proximity to Danigala Mountain or “ Alien Mountain ” that is near to the city of Polonnaruwa. The mountain is located deep within the jungle, and is a popular destination for hikers. The mountain has a flat top and an appealing circular shape. The internet became very excited by the uniqueness of this destination and immediately concluded that, at times, a UFO might have landed on this spot. Some tour guides claim this “Alien Mountain” attracts more thunder, lightning, and shooting stars than any other mountain around the region.

Different theorists have brought up yet other explanations for Sakwala Chakraya. Shereen Almendra, a senior lecturer of landscape design at the University of Moratuwa in Sri Lanka, suggested that Sakwala Chakraya might be a plan for a complex project to construct the giant stupas that were commonly built during those ages.

There are some archaeologists, such as Raj Somadeva, from the University of Sri Lanka, who dispute that Sakwala Chakraya should be considered a stargate. Instead, Somadeva offers the more measured alternative that this chart might be an early world map, as H C P Bell suggested in his earlier research. Under this theory, Sakwala Chakraya has more a religious than cosmological function.

Somadeva further noted that the Sri Lankans were familiar with stars and the night sky from as early as 250 BC. The Brahmi inscriptions of Sri Lanka note several names and references of stars, and show knowledge of concepts related to astronomy. 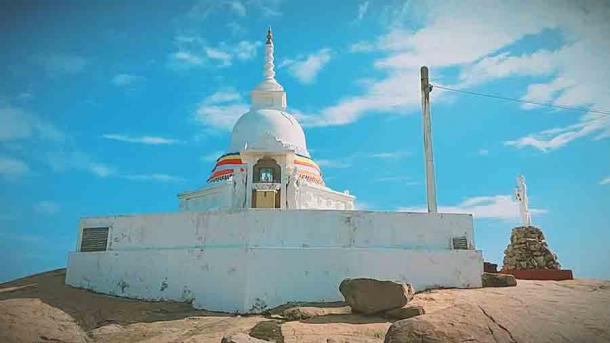 One such inscription, found in the historical and religious site of Kirinda in Sri Lanka, contains the phrase “Aparimita Loka Datuya,” which means “Infinite Universe.” This led to the idea that the person who engraved it had a relatively sophisticated understanding of the universe and its nature.

Somadeva has concluded that the biggest challenge for identifying the true purpose of this carving is lack of evidence. The Ranmasu Uyana, stupas, parks, and other historical aspects of Anuradhapura, are mentioned in various historical records and chronicles from 250 BC. However, there is no mention of Sakwala Chakraya in any of these historical records.

He said that while there might indeed have been a practical and definite use of this chart in ancient times, it is very difficult to identify what it was, due to this lack of evidence. The prime challenge is that the archaeologists cannot even date it accurately at present.

The kings of Anuradhapura ruled from 400 AD to 1000 AD. As the Anuradhapura kingdom is well documented in the historical records, archaeologists have multiple sources from which to interpret the complex of ruins here. However, this is not the case with Sakwala Chakraya, and its omission from any surviving documents is puzzling. Without any records there is no inherent evidence that the carving dates from this time. Some more fanciful theories suggest it may be as much as 5,000 years old and connected to the legendary demon King of Lanka, Ravana. 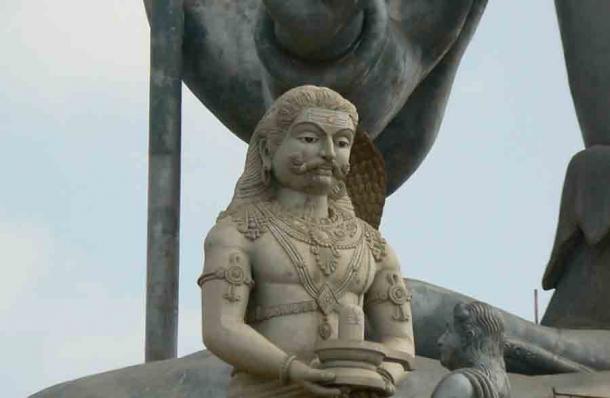 The researchers are currently focusing their efforts on establishing an accurate date for the carving’s construction. Only with this can the multiple theories be tested. The future might unveil more secrets about the so-called “Stargate of Sri Lanka”, but for now, it will still be considered as a mystery for lack of evidence. The purpose and meaning of Sakwala Chakraya is still lost somewhere in time. However, in the pursuit of reaching a conclusion, the efforts are ongoing and will never stop!