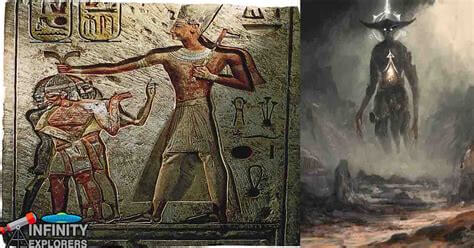 When we hear the name Sa-Nakht, we remember him as a Pharaoh, however, he was not a regular Pharaoh.
As a new study suggests that, the supposed remains of Sa-Nakht, a pharaoh of ancient Egypt, maybe the oldest known human giant.

Sa-Nakht is known as the first Pharaoh of the third dynasty of Egypt.
According to research, he has always been known as a great Pharaoh of his time.

Sa-Nakht, the reign of the giant Pharaoh occurred in 2500 BC. If the reports are to be believed, he ruled on his throne for around 18 years and he married Initkates.
As part of ongoing research into mummies, scientists investigated a skeleton found in 1901 in a tomb near Beit Khallaf in Egypt.

Surprisingly, the structure of the bones skeleton belonged to Sa-Nakht, a pharaoh of the Third Dynasty.

The skeleton was extraordinary not only for its length but also for its stature peculiar to this time.
The skeleton of the man have stood at up to 6 feet 1.6 inches (1.987 meters) tall, and interestingly previous research on ancient Egyptian mummies suggested the average height for men around this time was about 5 feet 6 inches (1.7 m).

Hence, it is important to note that this height is quite unique for a few long millennia.
As the remains were associated with the first king of the third dynasty, hence he is known as Sa-Nakht, the giant Pharaoh.

However, this could not be said with certainty as this was not the original tomb of the Pharaoh which is believed to be at Abu Rawash.

Height is considered of extreme relevance in anthropomorphology, as it can determine the disease that may cause extra ordinary tall height.
Generally, good eating habits of the ancient Pharaohs is believed to have dominated the bod structure.

“Ancient Egyptian kings were likely better fed and in better health than commoners of the era, so they could be expected grow taller than average. Still, the over-6-foot-tall remains the scientists analyzed would have towered over Ramesses II, the tallest recorded ancient Egyptian pharaoh, who lived more than 1,000 years after Sa-Nakht and was only about 5 feet 9 inches (1.75 m) tall”

The skeleton’s long bones showed evidence of “exuberant growth,” which were clear signs of Gigantism.
This unusual finding led the experts to evaluate the cranial measurements of the Pharaoh.
As compared to the analysis carried out with the existing data on the anatomy ancient Egyptians, evidently Sa-Nakht was not an ordinary Pharaoh.

A certain anomaly was observed specifically in the region of the mandible, which suggests that he possibly suffered from Acromegaly.
It is a condition known as gigantism, which occurs when the body produces too much growth hormone.
In most cases, this occurs because of a tumor on the pituitary gland of the brain.

The condition manifests from the face, head and extremities.
It is difficult to determine whether he was suffering from a mild or a severe condition, since his face was not at all deformed.

Hence it is yet to be determined whether he was suffering from a condition or he was associated with the biblical creatures, such as Nephilim or the giant children of the angels and women of Earth.

What do you guys think?