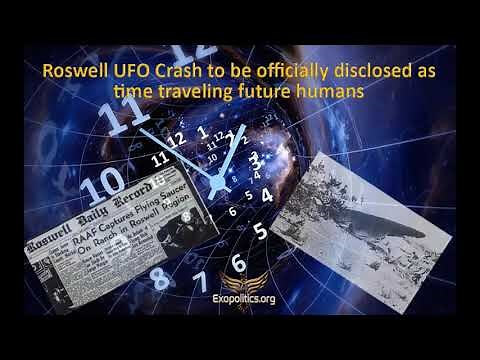 On June 18, President Donald Trump replied to a question about the Roswell UFO crash from his son, Don Jr, in a podcast. Trump’s reply was that he would consider declassifying what occurred at the 1947 event that was “very interesting”. According to new information from Secret Space Program Insider Corey Goode, Trump was told that the Roswell UFO Crash involved time-traveling humans from the future.

The fact that Roswell has been put on the public radar by Trump and his son does make it very possible that the first official disclosures about the UFO phenomenon is going to involve this classic 1947 flying saucer event. The language used by Trump in describing his knowledge of the incident, “it’s very interesting”, does suggest he was briefed about a more terrestrial explanation, than extraterrestrial visitors. “Time traveling humans”, as Goode claims his sources told him, would be more consistent with Trump’s low-key response to the question posed by his son.

The explanation that Roswell involved time traveling future humans who arranged for the crash to occur to speed up our technological development certainly sounds plausible, and will appeal to those wielding Occam’s Razor to dismiss the extraterrestrial hypothesis. Nevertheless, we need to keep in mind that even such a significant disclosure would still be a limited hangout designed to punt the full truth far into the future.