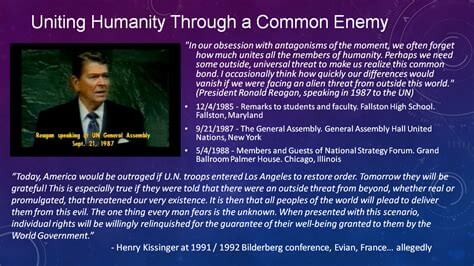 After a showing of the movie “ET”, Ronald Reagan clapped Steven Spielburg on the should and said: “You know, there aren’t six people in this room who know how true this really is.”

In a speech in 1987 to the United Nations, Ronald Reagan famously stated: “Perhaps we need some outside universal threat to make us recognize this common bound. I occasionally think about how quickly our differences worldwide would vanish, if we were facing an alien threat from outside this world. And yet, I ask you, is not an alien force already among us?”

This was after he had already reported seeing not one but two spectacular UFOs.

Television host Steve Allen first reported that Ronald Reagan had spotted a UFO in the late 1960s. On his show WNEW-AM, a radio program broadcast out of New York. He mentioned that there was a party held for the Reagans and they were over a half hour late after having stopped to observe a UFO moving down the Pacific Coast line.

Years later in a story reported by the wall Street Journal, Reagan recounted being in a plane with his private pilot during one of his terms as Governor of California: “I was in a plane last week and when I looked out the window and saw this white light. It was zigzagging around, so I went up to the pilot and asked, “Have you seen anything like that before?” The surprised pilot replied, “Nope.” I said, “Let’s follow it!”

This occurred over Bakerfield in 1974. Bill Paynter was the pilot and he was quoted as saying: “I was the pilot of the plane when we saw the UFO. Also on board were Governor Reagan and a couple of his security people. We were flying a Cessna Citation. It was maybe nine or ten o’clock at night. We were near Bakersfield when Governor Reagan and the others called my attention to a big light flying a bit behind the plane. It appeared to be several hundred yards away. It was a fairly steady light until it began to accelerate, then it appeared to elongate. The light took off. It went up at a 45-degree angle, at a high rate of speed. Everyone on the plane was surprised. Governor Reagan expressed amazement. I told the others I didn’t know what it was. The UFO went from a normal cruise speed to a fantastic speed instantly. If you give an airplane power, it will accelerate, but not like a hot rod, and that is what this was like.”