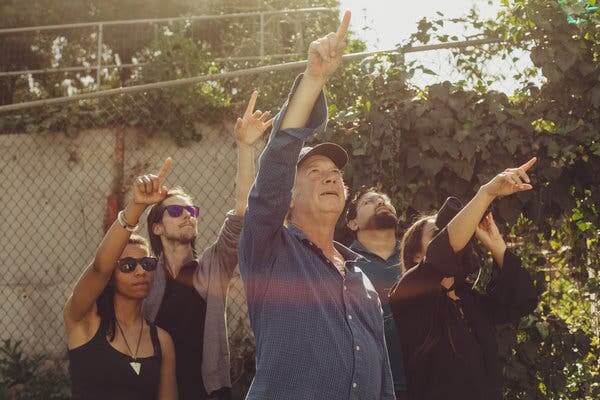 Robert Bingham is known as the infamous UFO summoner. He has summoned UFOs for thousands at events around the world. He did just that this past summer at Disclosure Fest.

Bingham is also a Philosopher, contactee consultant, photographer and the host of Strictly Out of the Box podcast. You can see many of his videos – captured by himself on-line.

Robert Bingham has “seen things.” When he was 39, he looked skyward and noticed a worm-shaped ship about 20 feet tall zipping through the clouds.

Unusual things kept popping up around him — or above him, rather. He saw a saucer and some flying objects shaped like beans next. He snapped a picture.

For over ten years, he kept his sightings to himself. That changed in 2010, when his neighbor came over to do some plumbing work. Mr. Bingham showed him his photos. The neighbor asked if he could invite his brother, who was very interested in unidentified flying objects, or U.F.O.s.

In awe of what they saw, they asked if they could invite more people to speak with Mr. Bingham — 40 more, actually. More than eight years ago, that was the first meeting of what is now known as “Summon Events with Robert Bingham,” at a park in Los Angeles across the street from where Mr. Bingham worked as a security guard.

Mr. Bingham, 62, an unassuming man who describes himself as shy, has become the nexus of a community of U.F.O. hunters in Los Angeles, fervent believers who come together to share their stories and persuade skeptics that extraterrestrial communications aren’t just a conceit for television shows.

Since then, he has attracted U.F.O. enthusiasts from all over the world, drawn together by the same questions: What are these things in the sky, exactly, and how can we learn more about them?

While there is just not enough documentation or scientific evidence to begin to explain or even confirm these sightings, that doesn’t stop the dozens of people that once a year descend on the same park to watch and assist Mr. Bingham as he tries to summon the “objects,” as they call them, and also to hang out with other enthusiasts who have turned into friends.

“It’s a great community because you can talk about anything and you’re not worried about being called crazy,” said Hans Boysen, 53, who has participated in the last seven summoning sessions with Bingham since 2011.

Wow wish I lived closer to The UFO Summoner, I truly believe he is capable of this, I have only tried this at night myself. This is possible to do , try it you will be amazed. Probably people would be less afraid during the day as well.
Thank You,