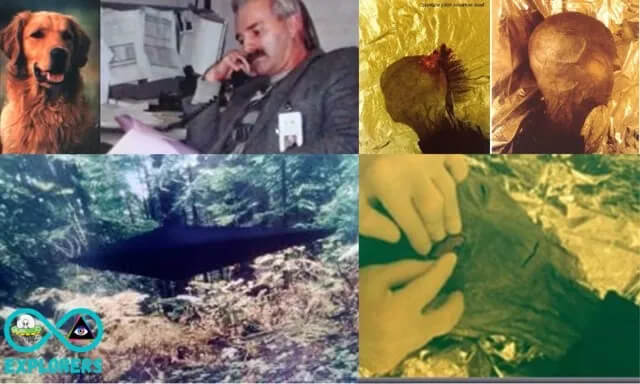 Billy Ray Otinger
Watch all parts at , youTube =Update of Dr Jonathan Reed’s Alien Encounter Part 2 Acebryan7oXx =Channel I think the 13 BloodLines that Rule the WORLD are Connected to the ILLUMINATI & the REAL ILLUMINATI are REPTILE, I think these Reptiles are Connected to a Sect of the Jews, see Ritual Sacrifice many cases in History where they Drake BLOOD, they have control over many ILLUMINATI members with DRUGS & SEX

In October 1996, a certain Jonathan Reed , who called himself a psychologist, went out, as usual, for a walk with his dog, a golden retriever named Susie. Reed lived in a private home in Seattle, Washington, USA. He walked down the street with the dog and went with it towards the neighboring forest, behind which the Cascade Mountains began. This is where the mysterious Alien Encounter Of Jonathan Reed happened.
Before Reed and his dog had time to enter the forest, something caught the dog’s attention, it became alert, and then barked wildly and ran for the trees. It looked as if she smelled prey, most likely some wild animal.

Usually Reed would not pay attention to this, thinking that Susie was chasing a squirrel or a rabbit, but then he remembered that in the morning on the same day he also went for a walk with Susie in the woods and noticed some large animal nearby in the thickets, similar to a bear.

When Reed realized that Susie might have smelled a bear, he again heard his dog’s growl and a noise that sounded like she was attacking someone. He became very alarmed and ran in that direction.

The Alien Encounter Of Jonathan Reed

Reed claimed that when he jumped out into the clearing, he saw his dog growling and barking at a strange humanoid creature standing on the ground.
According to him, the creature was about the height of a 12-year-old child and was wearing some kind of one-piece seamless black jumpsuit.  The humanoid stood and “vibrated” strangely, and then suddenly rushed at Reed’s dog, grabbed it and in one fell swoop tore the poor animal in half.
After that, the humanoid looked in the direction of Reed who was frozen in place from the shock.  Reed was scared, but he was a strong man and had time to prepare for the attack.
As soon as this creature approached, he with all his might hit him on the head with a large stick, after which the humanoid staggered and fell lifeless on the grass.

When Reed felt him, he did not move and looked completely dead. And then Reed heard a low humming sound somewhere nearby. Reed went in search of the source of the noise and soon came across a large black object with a smooth obsidian-like surface floating in the air just above the ground.
He apparently had a small video camera with him, because he stated that he was able to photograph this object in the forest.

The air in this place was as if charged with electricity, as before a thunderstorm, but, nevertheless, he decided to carefully approach the object in order to touch it, after which the humming suddenly stopped and the whole clearing plunged into silence.
Then Reed returned to the place where the dead alien and his killed dog lay. After some deliberation, he decided to collect the alien’s body to his home, wrapping it in something ( not specified ), and then stuffing it into the freezer.

The next day, Reed inspected the creature’s body, filming it with a camera and video camera, and then at some point, the alien blinked and let out a cry, proving that he was still alive. According to Reed, he also recorded this moment on tape.

Further, according to Reed, he noticed through the window that some “white vans with people” were standing near his house, watching him intently.
Then the alien creature miraculously regained consciousness, escaped from Reed’s house and fled towards the forest. Reed ran after him, and when, after an unsuccessful search, he returned home, he found that everything in the house was rummaged and that all his photos and video recordings with the alien were missing.
According to Reed, he had only a few materials left, which he hid better than the rest.  He further claimed that mysterious people began to follow him and once they even shot at him, injuring only his shoulder by a lucky chance.

This made him fear for his life and for several years to be silent about what happened to him. When Dr. Reed finally came out with his outlandish story, he made a lot of noise among the UFO fanatics, sparking a lot of speculation and controversy.
He has appeared on many radio broadcasts, talking about his case, including the program of the researcher of anomalous phenomena Art Bell, and also spoke at conferences on UFOs and even wrote a book called “Link – An Extraterrestrial Odyssey”.

He also published some of his surviving photos of the alleged alien and even videos, which also caused a lot of controversy regarding their veracity. Unsurprisingly, this story has been very popular in the United States for many years.

But then, one after another, more and more skeptics appeared who began to “dig” out this story

The first and most suspicious thing was that it turned out that Jonathan Reed was not his real name at all, but in fact he was Jonathan Bradley Rutter , a fact that he immediately admitted and stated that he had changed his name to hide his identity from the mysterious pursuers, who, he believed, continued to follow him.

He also initially claimed that his dog was simply torn in half by an alien, but later he added that the alien, after killing the dog, also somehow “burned” the animal, leaving only a heap of ash instead of its remains.  Another comment was that at first he said that the object in the forest was in the form of a “thorn”, but later said that it was “like an obelisk.” However, all this could be called rather petty quibbles.

he claimed that he had several scraps of the alien’s clothing and some biological samples that he managed to hide from “observers”, he refused to give them to someone for study and analysis.
He even claimed that the few people he allowed to look at them “disappeared” or “were killed,” again without any evidence to support this.

The Alien Encounter Of Jonathan Reed was all rather suspicious, but perhaps the most suspicious of all is his video clip with an alien. The video depicts what appears to be a child-sized humanoid figure with large slanted eyes, a slit mouth, and a slightly elongated head.

One of the skeptics described all the controversial points about this video: “

1) The one who removes this, for some reason never shows in detail the clothes of aliens (which looks like completely human), we also never see hands, feet, legs or any other part of the body.

2) In fact, it does not look like there is a body at all, it just shows that it is some kind of clothing in the form of a humanoid. If this creature could rip the dog in half, could just a blow to the head immobilize it?
3) I find it hard to believe that the blood of an alien is so similar to human blood.

4) The alien never moves. Not even the slightest jerk. Blinking eyes, that’s all. There is no movement from his flat body, no turning of the head, no movement of the mouth.
5) So the alien has enough strength to rip the dog in two, but not enough to move an arm, leg, or head?

6) Why didn’t this “doctor” call the police and ask other people to testify?

7) Reed for some reason recorded the alien’s “cry” not on a video camera, but on a tape recorder. Reed claims it was visible. Indeed? Why is the video then?
8) Why, when he picks up his head and skull, the alien did not “scream”? But just by opening the freezer door, he screams but plays with a head wound?
In general, there is absolutely no evidence that Rutter / Reed had an alien in the freezer. This is just a badly filmed, planned, played video of a terrible alien doll, it is not proof, in fact, it greatly downplays the veracity of this event.

Take this proof and it will become very clear to you that this guy is a crook, and the people who want to believe in aliens so badly are his victims. ”

However, many people still defended the footage and the veracity of Reed’s story, and Reed himself continued to stick to his story even in the face of such harsh criticism.
Nevertheless, in the ufology community, it is generally accepted to say that Reed is a fraud, and his video is a clear hoax, although this has never been 100% proven and there are many arguments in favor of Reed. Reed himself still continues to defend his story and insist that he is telling the truth.

What do you think about the Alien Encounter Of Jonathan Reed ? Leave us your comment.