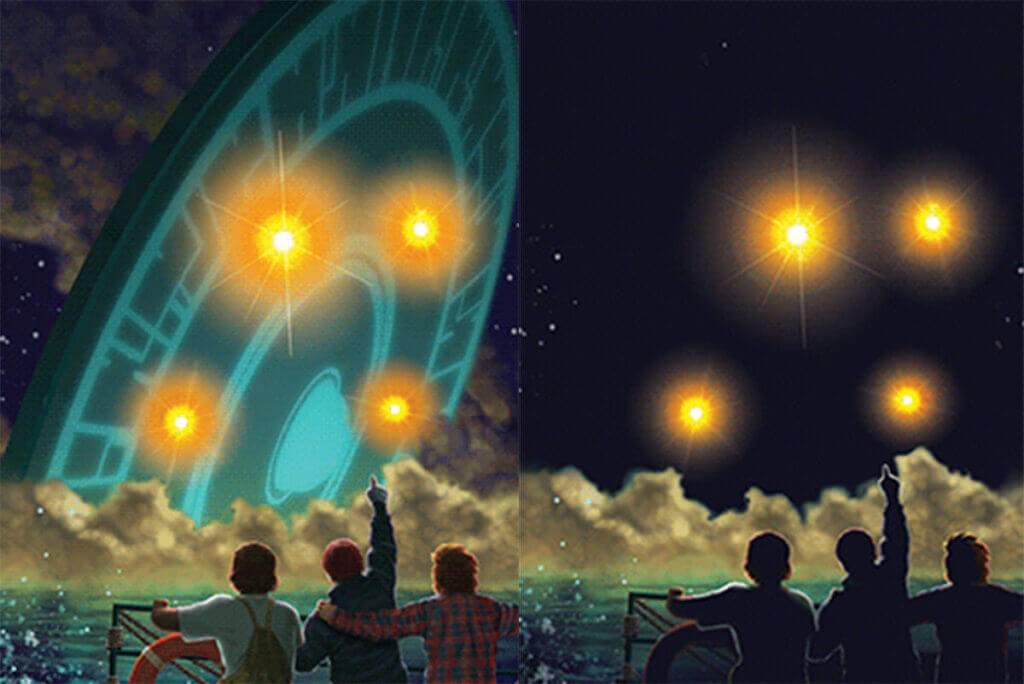 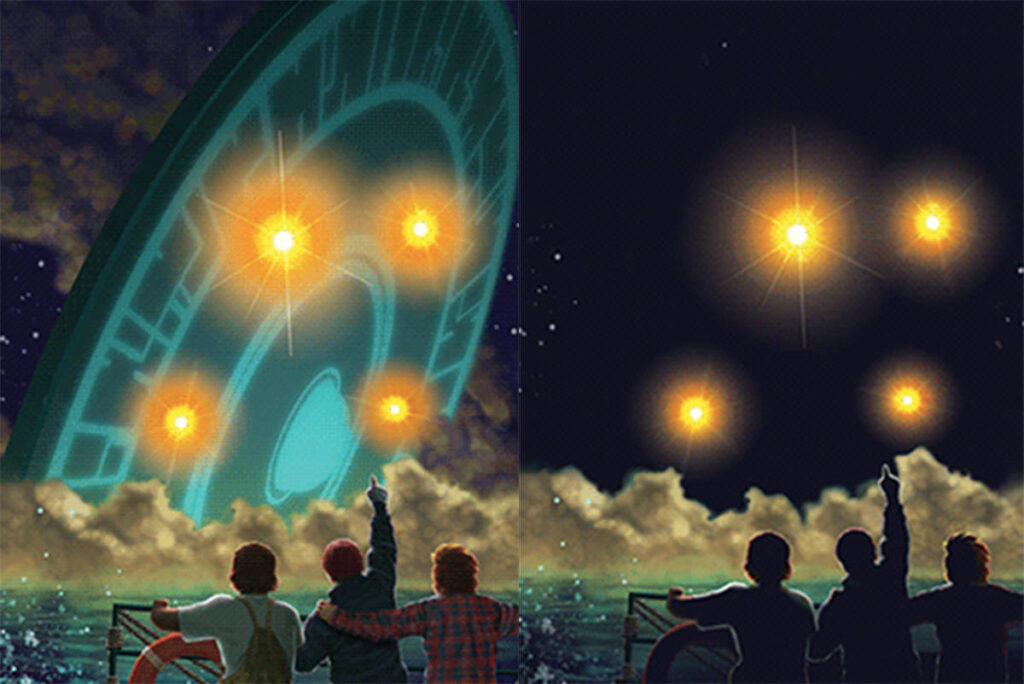 Over the past decades, there have been countless UFO sightings and encounters with them that have taken all forms and sizes. There seems to be no consistent norm for how UFOs should look, and although saucer-shaped or spherical are the most common, they do control the range of visibility. And sizes range from tiny to very large.

How big do you think a UFO should be before it is considered truly impressive? The size of a bus? Airliner? What about even bigger ones? What would you think of a UFO the size of a football field or more? Although rare, there have been some reports of UFOs of this size, and here we look at some of the largest ever seen.

The earliest case we consider here dates back to 1956. This was originally told by Major Donald E. Keyhoe, who at that time first heard the story in 1959, during which he served as director of the National Investigation Committee on Aerial Phenomena.

Navy captain James Taylor approached Keyhoe, who told a wonderful story that he had been trying to keep out of the public eye for a long time. According to Taylor, in 1956 he was aboard the R7v-2 naval transport, piloted by commander George Benton and Lieutenant Peter W. Mooney, flying across the Atlantic to the Patuxent Naval Air Station, Maryland, in the United States, together with several other sailors returning from abroad, several dozen crew members and 30 pilot pilots, navigators and flight engineers. That evening, they were approaching a stop in Gander, Newfoundland, reportedly in clear and calm conditions with excellent visibility, when a series of strange events were played out.

When Benton looked at the calm sea, he noticed that instead of the dark space that stretched to the horizon unnoticed before, now there was “a group of lights like a village” ahead. It turned out that the co-pilot could also see them clearly, and they both agreed that they looked like a small town, just sitting there in the middle of the ocean.

The problem was that there should have been nothing but open water. At first they thought they had lost their course and were approaching Earth, but a test of the instruments showed that they were following exactly the intended course. Then it was suggested that they saw the ships, but attempts to contact them by radio were met in silence, and a check with his radio operator did not find any records of any groups of ships planned there.

It did not help that these ships were not similar to any of those that they had seen before. It was strange enough that they woke some other crew members, most of whom were asleep, and several other people crowded in the cockpit to see a strange sight. Now they were almost directly above the mysterious lights and began to circle around them to try to understand what was happening. Just then, a group of lights suddenly faded, and Keyhoe writes about this:

When our plane began to circle, the strange lights suddenly faded. Then several colored rings appeared, which began to spread. One of them, as Benton observed, seemed to be growing in size. A shout came from behind him. Benton shot him another look. This luminous ring was not on the surface — it was something rushing toward transport.

“What the hell is this?” Said Mooney. “I don’t know,” muttered Benton. He began to climb. But then he realized that it was useless. A luminous ring could catch them in seconds. The glow, as he now saw, emanated from the edge of some large round object. He reached their height and quickly took the form of a giant disk-shaped machine.

Whatever it was, it was huge. The plane they were on was called Super-Constellation, a huge four-engine plane that looked more like a flying fortress than a plane with a length of 116 feet and a wingspan of 117 feet, and this mysterious object was reportedly completely eclipsed by it, estimated Benton, about 400 feet in diameter. He quickly gained height, and the plane tipped in a dodging maneuver, but just when a collision seemed inevitable, the object turned towards their plane and began to walk along the port side. It was then that they were able to see the true monstrosity of this, and Keyhoe says:

Its mass was astounding; its diameter was three to four times the wingspan of our aircraft. At least thirty feet thick in the center, it looked like a giant plate, overturned on top of another. The luminescence visible from such a distance along the edge was blurry and uneven. Whether it was an electric effect, a series of jet exhausts, or light from a hole in a rim, Benton could not tell. But the glow was bright enough to show the curved surface of the disk, giving a hint of a dimly reflecting metal. Although Benton did not see any signs of life, he had the feeling that they were being watched. Struggling with the desire to dive, he kept a direct course. Gradually a strange car rushed forward. Bending his massive body up, he quickly gained speed and was lost among the stars.

After this painful experience, Benton immediately called the tower on the ground and asked if they noticed anything strange, and they confirmed that the object was detected by their radar, but everything became very strange when they landed in Granger. According to Taylor, they were met by Air Force intelligence officers, who gave them lengthy interrogations about what they saw, and seemed to believe that this was all a fact, never asking what people saw, but rather wanting details.

After that, the mysterious officers refused to answer any questions about what they thought was happening and told the crew who had witnessed this phenomenon to keep silent about it. A few days later, Benton will say that he was approached by an unnamed scientist who showed him photographs of the object they saw, but refused to divulge additional information about it.

More recently, quite a report from 1996 was published in the Pelotas region of Brazil. On November 5 of that year, the Brazilian pilot Haroldo Westendorf went on a private flight on his Embraer EMB-712 single-engine aircraft. Haroldo was an avid private pilot and flight acrobat, and it was a purely entertaining flight, but it will become a rather painful experience in just 12 minutes in the air.

At about 10:30 in the morning, the pilot crossed the nearest lake when he noticed a giant object floating in the air. After checking by the ground control that they also saw it, Haroldo made a possibly stupid decision to come closer. It will be much stranger than he expected.

As he approached, he saw that it was some kind of huge 8-sided pyramidal object, estimated to be about 70 meters (225 feet) in height and about 100 meters (325 feet) in diameter, and Haroldo reported that he had a good view of it bypassing it several times at a distance of only 40 meters. He claimed that each side of the pyramid had a series of opaque triangular windows on it, and that the object was apparently metallic and brown.

The massive structure also seemed to rotate very slowly and inexorably approaching the nearest coast at a speed of about 60 nautical miles per hour. While the pilot looked reverently at this massive object, a small disk-shaped ship jumped out of the hole in its upper part, which completely ignored the plane and sped off at an incredible speed.

Then Haroldo climbed to look at the top of the monolithic object, but as soon as he did, he began to spin even faster and ominous rays of red light emanated from him. After a few moments, this huge pyramid then shot straight at the sky at a very fast pace, which was rather alarming as the pilot fully expected a possibly catastrophic shock wave of turbulence.

He even began dodging maneuvers for the expected approaching wall of turbulence, but he claims that it never happened, as if the ship had defied the laws of physics. This story received quite a bit of media attention in Brazil at the time, but although Haroldo would claim that it was witnessed by at least two air traffic control installations, they denied seeing anything. Despite this, several witnesses will come forward to say that they also saw him.

Even more recent to this day is the April 2007 report, and this is arguably the largest UFO of them all. An experienced pilot, Captain Ray Bower, flew over the coast of Alderney, Channel Islands, when he noticed a bright yellow light approximately west of the island.

It was hard to say what it was, but it was clear that it was absolutely gigantic. Bauer would say about a strange subject:

It was a very sharp, thin yellow object with a green area. He was 2,000 feet high and motionless. I thought it was about 10 miles, although later I realized that it was about 40 miles from us. At first I thought it was the size of 737. But it must have been a lot bigger because of how far it was. It could be a mile wide.

I can’t explain it. At first I thought that it could be a reflection from a vineyard in Guernsey, but it would quickly disappear. This was clearly visible for about nine minutes. When I approached it, it became clear to me that he was tangible. I was in two thoughts about flying up to him to look closer, but decided not to do this because of its size. First I had to think about passenger safety.

He will later find an identical object in another area, and it will also become clear that at least one of the objects was spotted by another pilot, although the ground control radar did not find them. Interestingly, a few years earlier, on January 28, 1994, a similar object was seen in approximately the same area and was rated as having more than 1000 feet in diameter.

What kind of ships are these and why are they so incredibly huge? Besides the obvious technological miracles that must be in order to let them fly like that, what is their purpose? Maybe these are mother ships holding smaller vessels, which are most often visible?