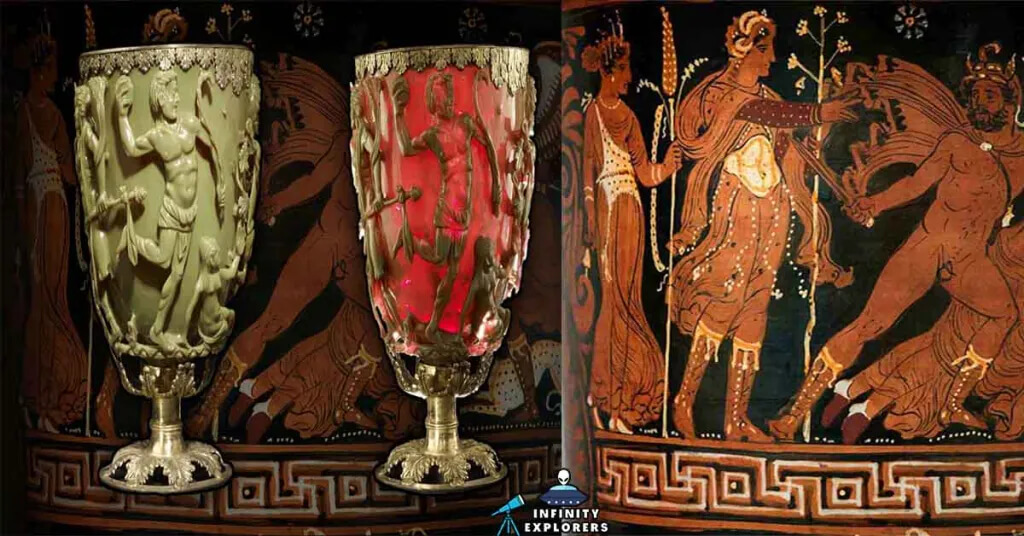 Renowned scientists and researchers believe that Nanotechnology was used for the first time some 1600-1700 years ago. However, to our surprise, A chalice called the Lycurgus cup was made sometime between 290 and 325 is the ultimate proof that ancient cultures used advanced technology thousands of years ago.

The Lycurgus Cup is one of the earliest examples of nanotechnology in use in human history. It truly is an amazing piece of work, dating 4th century AD.

Utilizing nanotechnology is one of the many milestones that mankind has achieved in recent decades. This technology has allowed men to work with systems between a hundred and a billion times smaller than a meter; where the materials obtain particular properties. The beginning of nanotechnology dates back to 1600 years ago.

But the question is that where is the evidence? Well, an artifact dating back to the rule of the Roman Empire depicts that the ancient Roman craftsmen knew about nanotechnology 1,600 years ago.

Roman Lycurgus Cup is a 1,600-year-old jade green Roman chalice. When you put a source of light inside it magically changes color. It appears jade green when lit from the front but blood-red when lit from behind or inside.

It is considered one of the most technically sophisticated glass objects that were manufactured before the modern era. It is firmly believed by the researchers that the chalice is evidence of the fact that how ingenious the ancient craftsmen were.

The images engraved on the small-glass structure depict the scenes from the death of King Lycurgus of Thrace. It depicts King Lycurgus ensnared in a tangle of grapevines, presumably for evil acts committed against Dionysus – the Greek god of wine.

It is reported by the Smithsonian Institution that the glass appears dull green color to the naked eyes, but when a light is placed behind it, a translucent red color is shown. This effect is created by the embedding of small particles of gold and silver in the glass.

Analysis of the Lycurgus Cup

An examination of the fragments of the cup conducted by British researchers revealed that the diameter to which the metal particles were reduced was equal to 50 nanometers – that is equivalent to one-thousandth of a grain of salt.

This situation is difficult to achieve even in the present time. Producing the Lycurgus Cup amounts to a huge development given the presence of technology and resources back then. The results further established that the ancient Romans were completely aware of what they were doing. Ever since 1958, the Lycurgus Cup is in the possession of the British Museum.

An Evidence of Ancient Nanotechnology

The most important question concerning the Lycurgus Cup is that how does it work? The process of its working is thrilling in itself. When the light hits the glass, the electrons that belong to the metallic spots tend to vibrate in ways that alter the color depending on the position of the observer. However, simply adding gold and silver to glass does not automatically produce that unique optical property.

It is indicated by some that the cup was not actually manufactured by the Romans as the process of its working is quite complex and difficult to achieve. To achieve this, a highly controlled and careful process is required that suggests that this cup might not be the work of the Romans.

The exact and calculated mixture of metals indicates the Romans were very much aware of what they were doing and the invention of the cup was not just some luck. They comprehended the use of nanoparticles and discovered that adding precious metals to molten glass could tint it red and produce unusual color-changing effects.

According to “The Cup of Lycurgus – Roman Nanotechnology”, it is suggested that “The nanotechnology is a complicated technology and its results won’t last long”.

“The Romans knew how to make and use nanoparticles to achieve beautiful art….. We want to see if this could have scientific applications.”

Gang Logan Liu, an engineer at the University of Illinois at Urbana-Champaign

If the researchers manage to understand the technology entirely and happen to develop a new detection tool using this technology, it would be a life-changing event.

1 thought on “Proof Of Nanotechnology In Ancient Time, ” The Lycurgus Cup””