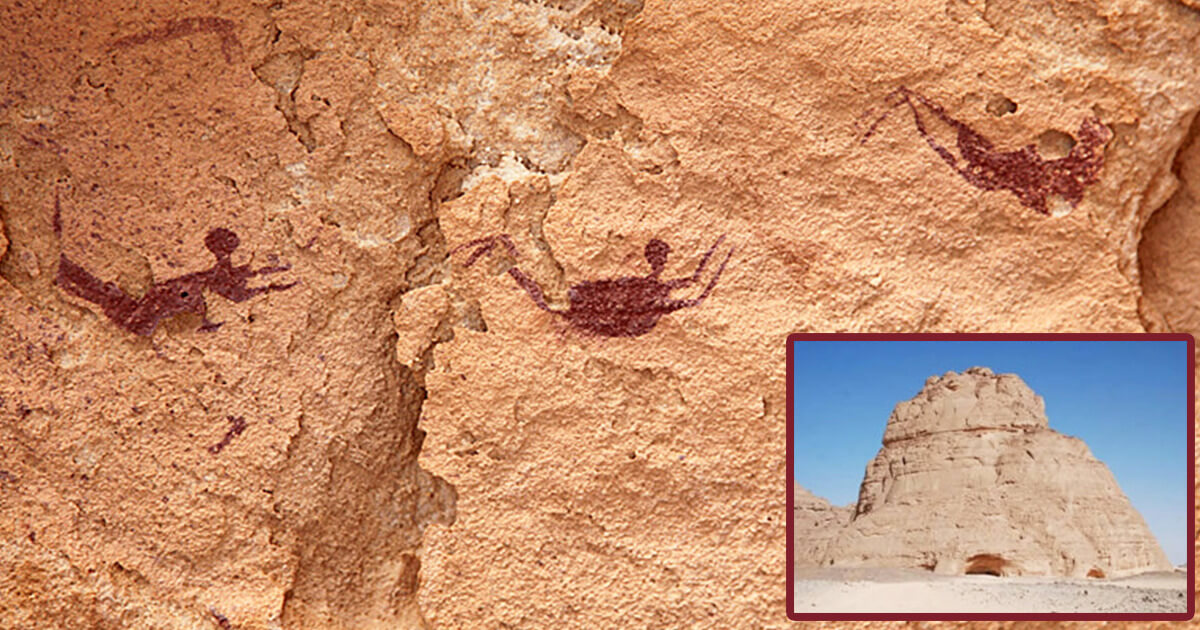 heritagekeymedia
Gilf Kebir is the most arid and desolate places on Earth, but thousands of years ago, the site had water and was inhabited by humans and animals. In the 1930s, Hungarian explorer László Almásy discovered prehistoric paintings in the Cave of the Swimmers, which gave a view into the life of a long forgotten civilization. The video takes us inside the Foggini-Mestekawi cave, discovered in January 2003, and gives us an insight into its ancient, mysterious past.

When you think of the Sahara desert, what comes to mind first? Instantly, pictures of an arid desert with a lot of dryness spring to mind, and we immediately connect it with heat. This is how it seems now, although it wasn’t always like this.

According to records, it was quite different thousands of years ago, with flora and a diverse range of creatures. There was also The Cave of the Swimmers, a legendary location. Next, we’ll go across time to discover how interesting it was.

Thousands of years ago, the Sahara desert

We can see the incredible shift that happened in the Sahara if we travel back in time. This location, for example, was lush and green, with beautiful flora. It had meadows, woods, rivers, lakes, and a diverse population of animals as if it were a paradise.

The evidence discovered in the desert itself, including rocks, fossils, petroglyphs, and cave paintings created by people at the period, confirms this conviction. Among these recordings is The Cave of the Swimmers, a fascinating location.

This is an amazing discovery.

It happened near the Libyan border in the isolated Gilf Kebir Mountains in southern Egypt. In October 1933, it was discovered by László Almásy, an adventurer of Hungarian descent.

Small art representations may be seen within the towering cave in Wadi Sora. These may be interpreted as a drawing of people swimming, and they were most likely made about 8,000 years ago during the Neolithic period.

There are also drawings of giraffes, antelopes, and oxen in the cave, indicating that the region was once a large oasis with a lake where people could bathe and drink water.

Also, only 10 kilometers from the Cave of the Swimmers, we locate the ” Cave of the Beasts,” which has one of the most mysterious depictions of rock art, believed to be about 7,000 years old and found in 2002.

This cavern includes a “panel” 17 meters long and 3 meters high with more than 5,000 figures painted mostly in red, but also in yellow, white, and black, that depict negative hands, groups of men, and gigantic headless creatures known as “beasts.”

The explorer was so impressed by what he saw that he wrote a book about it, describing everything in great detail. He claims that the cave depictions are based on real-life events from the historical period. As a result, it’s possible that the Sahara experienced a climatic change that marked a before and after in the Sahara.

This final idea was novel at the time, making it suspect. In fact, the publisher was compelled to add notes in order to incorporate them into the book. In this manner, he could make it obvious that he disagreed with the writer’s viewpoint.

Other historians believed in the change of the Sahara

The arid environment has previously been noted by ancient historians such as Herodotus and Strabo. They speculated that the presence of a humid and vegetation-rich Sahara might be conceivable. Scientists, on the other hand, did not take them seriously due to their anecdotal character.

In the middle of the twentieth century, a slew of new evidence surfaced that revealed something intriguing. They discovered that subtropical North Africa was humid in the early and middle Holocene. Before there were lush woods in the area of lakes and rivers, it was known as the African Humid Period.

The beginning of climate change

All of the lovely flora and wildlife that had previously existed started to wither. The climate started to shift about 6,000 to 5,000 years ago, bringing with it the profusion of plants. As a result, the Sahara evolved into what we know today.

It changed from being lush with trees to being parched and overflowing with sand from the dried lakes. Furthermore, it became inhospitable for humans, who migrated to the Nile as a consequence. Changing their way of life and assimilating into the ancient Egyptian civilization of the pharaohs.

Expeditions are led by researchers.

Almásy, the man in charge of finding the cave, went into the Libyan desert as well. This occurred in the late 1920s and early 1930s, namely in the year 1932. The goal of this new mission was to locate the fabled Zerzura, the Birds’ Oasis. He accomplished it in the presence of three other British-born explorers onboard an aircraft.

They surveyed the desert from the air and discovered three secret valleys. These were hidden among the foliage in the Gilf Kebir’s northwestern reaches. Unfortunately, repeated efforts to get there failed.

Later, in 1933, Almásy went on another trip, this time with Leo Frobenius, a well-known German ethnographer, and was successful in gaining entry. Many ancient rock art locations, such as the Cave of Swimmers in Wadi Sora, were found by him.

This incredible location gained even more renown as a result of the fictitious story of its journeys depicted in the film The English Patient, in which Ralph Fiennes portrayed László Almásy. A duplicate of the cave featured in the film and quickly became a tourist attraction.

Without a doubt, this location, also known as the ‘Sistine Chapel of the Sahara,’ is part of a unique, mysterious, and intriguing photographic collection that enables us to see into prehistory in a region that hundreds of years ago had a temperature and environment quite different from the dry desert we enjoy today.