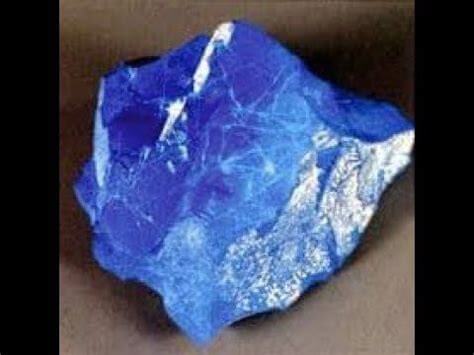 In today’s world, everyone who is even remotely interested in Extraterrestrials is looking for real evidence that is reliable.
As per now, there is no concrete evidence of the existence of the visitors from the other worlds.
Formation of crop circles could be one of the evidence but still, according to the mainstream scientists, there is no hard and fast proof of that either.
Secondly, the evidence could be extracted from the remains of an ancient Sumerian woman, Queen Puabi. Her DNA may prove that she was not entirely human. The test results are still awaited.
The third example of evidence could be derived from the beautiful sky blue stones, called the sky stones. The matte finish blue stone with white veins on them has been the subject of lore since the ’90s.

The tale of the Beautiful Pitoni Sky Stones

In 1990, a mysterious geologist named, Angelo Pitoni bought weird blue stones from a Fula Chief in Sierra Leone in West Africa.
The tribe had a saying that diamonds are stars that fell from the sky.
Pitoni jokingly said if the stars fell, then the sky must have fallen too, the people replied with a yes.
After which the local shaman took him to a place where there were some pieces of unidentified blue stones.
When he dug deeper, he found over 200 kg of it which was not in a natural formation, but rather set in a pyramid shape.
The tribe asserted that the stones came from the visitors of the other world. They claimed that the stones have fallen from the sky.
Pitoni returned to Europe along with the stones and sent them for testing.

The tests reported that the stones did not match any known mineral.
The researchers could not explain the blue color of the stones. When a piece of stone was reduced into fine particles and was viewed under a microscope, no blue color could be seen.
Neither the extreme heat could alter the stones nor the acid could break the stones down.

The further results showed that 77.17% of the stone was oxygen, the remaining was carbon, calcium and still, a part of it was made an unknown compound.
The age of the sky stone is estimated to be 55,000 years.
Pitoni was certainly seen in photographs along with the sky blue stones but obtaining hard evidence of his life is near to impossible.

Online stories suggested that he was somehow involved with the CIA, a secret agent, an explorer in the Amazon jungles, and discoverer of a Mayan city.
The American artist and designer, Collins, was seen holding a briefcase consisting of samples of the sky stones in “The Star Gods of Sirius,”.
Finally, the mystery of the sky stones seems to come to an end as prestigious institutions are conducting tests on it.
Collins tried to obtain a sample of the stones since he first saw them in Hong Kong, in 2013.
The Gem dealer who had the possession of the stones told him a weird story that the stones have come from the sky and he has gotten them tested at GRS Swisslabs by Dr. Preeti. After waiting for months, the results said that
the doctors couldn’t determine its composition and ended up declaring it as unidentifiable.
Collins tried to get the samples but the dealer refused. He tried his luck at Erich Von Daniken’s museum, the Mystery Park, in Interlaken, Switzerland where the sample of the stones was on display. The museum disagreed to sell the samples too
As a final resort, Collins inquired with the same dealer at Hong King.
To his surprise, he agreed this time and told Collins that the letter of the test was also available if he wanted it. Along with the stones, he narrated the story of how the stones came to Hong Kong.
The Gem dealer got the stones from an Italian man named Vijay whom he met twice once in India and later during a seminar in Italy.
At the seminar, Vijay showed him a sample of a Sky Stone he had obtained from his friend, the same Angelo Pitoni.
In correspondence to Collins, the Gem dealer told him that Vijay believed the stone came from the star Sirius B.
Collins took the sample of sky stone to the University of Washington Earth and Space Sciences division for testing on March 6, 2019.
To ensure the research to be impartial, he never told the university what exactly they were examining. the researchers were told that they have been researching stones that have fallen from the sky and found under the Earth.
After years of research, he found that stones were nothing like anything on earth.
It appears the Pitoni Sky Stones are really something. There is no proof that extraterrestrial brought the stones to Earth, it’s still compelling hard evidence for thought.