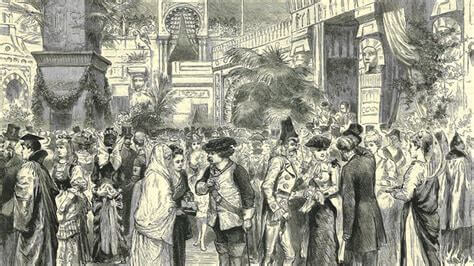 Widely regarded as the first ever sci-fi convention, the ‘The Coming Race’ and ‘Vril-Ya’ Bazaar and Fete was held at the Royal Albert Hall on 5-10 March 1891.

This costumed fund-raiser was themed on a 1871 science fiction novel, The Coming Race by Baron Edward Bulwer-Lytton, in which the Earth is threatened by the ‘Vril-ya’. This superior and winged master race find the source of their power in ‘Vril’ – a latent source of energy akin to electricity. The Coming Race was a pioneering publication of the sci-fi genre, and extremely popular in popular culture in the 1890s.

In the model of modern comic-cons, visitors were encouraged to come in fancy dress, filling the Hall with various ‘Coming Race’ characters and generally ‘exotically’ costumed fans of the book; many donned wings. The character of Princess Zee, from the novel, was played by a young lady wearing a black satin dress and silver flower tiara that glowed with electric lights.

With Vril-ya architecture having been described as similar to that of ancient Egypt, Sumeria and India, the Hall was bedecked in flowers, palm leaves and ferns. A grand ‘Pillar of the Vril-ya’ was erected in the arena, modeled on Cleopatra’s Needle. Vril-themed magic shows, a fortune telling dog, musical entertainment and grand feasts were held in the auditorium, while winged Vril-ya mannequins flew above.

Surprisingly, one stall sold cups of Bovril (the recently invented beef extract drink), which was named after ‘Vril’, the fictional life force coined by Bulwer-Lytton. Having read The Coming Race, the words ‘bovine’ and ‘Vril’ were combined by the drink’s inventor John Lawson Johnston, symbolising the energy a mug would give the drinker. The Royal Albert Hall’s ‘The Coming Race’ and ‘Vril-Ya’ Bazaar and Fete was the perfect place to advertise this new product.