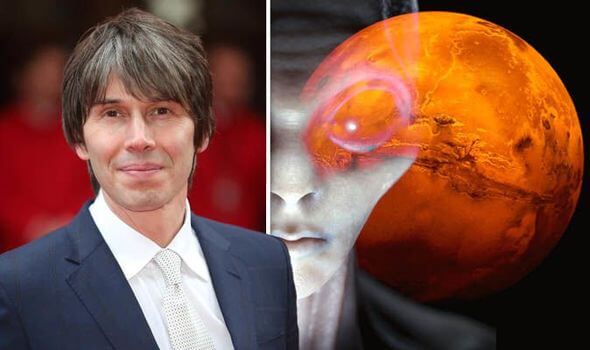 Science has long tried to answer the question of whether humanity is alone in the universe and astronomers worldwide are searching for clues of extraterrestrial life. TV presenter and particle physicist Dr Brian Cox is one of those scientists who believe humans will one day find evidence of alien life on Mars. Dr Cox appeared on the Joe Rogan Podcast, where he was quizzed about his thoughts on the possibility of life outside of Earth. The scientist admitted he likes to entertain the thought of microbial life evolving somewhere on the red plains of Mars or on the moons of Jupiter.

Dr Cox said: “I think there must be alien life, even in the solar system I would not be surprised if we find microbes on Mars or the moons of Jupiter or Saturn, where there’s liquid water.

“The reason I think that, and it’s a guess, is if you look at the history of life on Earth, then Earth formed and there was no life – it was a ball of rock – and almost as soon as it cooled down we see evidence of life.

“So certainly 3.8 billion-years-ago, possibly even further back than that, we see evidence of life on Earth.

“So somewhere along the line active geochemistry became biochemistry on Earth.

“We have some idea that if you get gradients of temperature, acid, alkaline and the conditions that are naturally present on the surface of oceans, then complex carbon chemistry spontaneously happens.

Aliens on Mars: Dr Brian Cox said there must be evidence of microbial life in the solar system (Image: GETTY)

I think there must be alien life, even in the solar system

According to US space agency NASA, Earth is the only planet in our solar system capable of sustaining life for certain.

But the fact has not stopped the agency from exploring our neighboring Red Planet for clues of life from its distant past.

Space orbiters and robotic landers have been exploring the surface of Mars since the 1960s.

And last year, ex-NASA chief Ellen Stofan testified before the US Senate in confidence astronauts will one day uncover fossils on Mars.

NASA said: “Even if there were no life on Mars, it would be exciting o know whether there used to be life there.

“So in addition to looking for living bacteria, NASA will be searching for tiny fossils that might indicate life got an early start in Mars’ history but, unlike on our home planet, it did not survive and evolve into larger life forms.”

Dr Cox has now said it would be surprising to him if alien life did not start elsewhere in the solar system, in the same way it did on Earth.

Aliens on Mars: Dr Cox said Mars used to have life-conducive conditions in the past (Image: GETTY)

The physicist stressed testing this there in practice is now one of the “great frontiers and great challenges” by newer generations of scientists.

He said: “This is another reason why we’re interested in Mars. We know those conditions were there.

“We know there were what’s called hydrothermal vent systems on the floors of oceans on Mars, 3.8 or four billion years ago.

“So it would be good to know if what I’ve said is right and the way we find out is to find life or evidence of past life.”