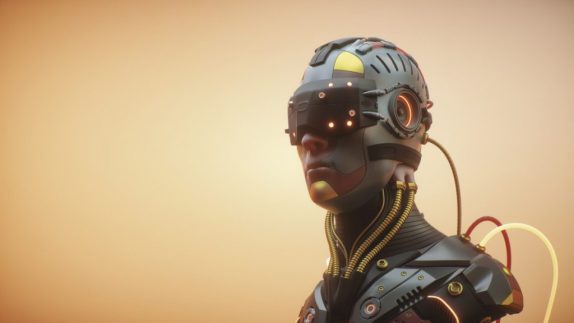 Cybernetic enhancements that fuse humans and machines are coming, and the U.S. Military wants to be prepared.

A new report from the U.S. Army Combat Capabilities Development Command Chemical Biological Center—a scientific research division of the Army with a focus on biological and chemical weapons—detailed what the field of cybernetics might look in 2050. The report, titled Cyborg Soldiers 205: Human/ Machine Fusion and the Implications for the Future of the DOD, reads like the framework for a dystopian novel set in a near future where injured soldiers are cybernetically enhanced, but come home to an America terrified of cyborgs.

“The primary objective of this effort was to determine the potential of machines that are physically integrated within the human body to augment and enhance the performance of human beings over the next 30 years,” the researchers said.

The study identified poor public perception as being a barrier to the mass adoption of cybernetics. Terminator II: Judgement Day poisoned us all against killer robots, much to the military’s chagrin.

“Across popular social and open-source media, literature, and film, the use of machines to enhance the physical condition of the human species has received a distorted and dystopian narrative in the name of entertainment,” the study said. “Defense leadership should understand that negative public and social perceptions will need to be overcome, if these technologies are to be fielded.”

Cyber enhancement is cutting edge technology, and it’s hard to predict where it will go over the next three decades. The Pentagon researchers focused on four probable areas of enhancement: super vision, augmented hearing, enhanced muscles, and “direct neural enhancement of the human brain for two-way data transfer.”

The Pentagon predicts a world where enhanced soldiers have cybernetically enhanced eyes that allow them to see across the battlefield in different wavelengths, and identify targets in “dense, urban environments or subterranean mega-cities that will challenge identification and tracking of targets,” they said.

The researchers mention what becomes a disturbing theme of the study—many of these enhancements may only occur after a soldier is injured. When working with a delicate area such as the eye, injury may be the only path towards convincing a wounded warrior to receive the surgery, the study notes.

“Ocular enhancement would be an attractive medical option in situations where the eye tissue has been damaged or destroyed by injury or disease,” the researchers said. “It is deemed unlikely that individuals would willingly undergo removal of healthy tissue in an area considered to be sensitive. However, the central and critical role that vision plays in society would likely motivate warfighters who have lost part or all of their vision to voluntarily undergo surgery that would restore or even improve their ability to see.”

This trend of fixing fallen soldiers with cybernetics continues with optogenetic musculoskeletal control systems. “The most likely [use] would be in the restoration of lost function due to injury of muscles or nerves,” the study said. “Musculoskeletal injuries are the second leading cause of lost duty time in the U.S. Armed Forces.”

To enhance muscles, the Pentagon would enhance weak tissue with a “network of emplaced subcutaneous sensors that deliver optogenetic stimulation through programmed light pulses,” the researchers said. Optogenetics stimulates muscle tissue, or even neurons, with light instead of electricity.

“The optogenetic controller would, in effect, take control of the motions of a warfighters limbs, thereby allowing a novice (i.e., the warfighter) to perform functions professionally”

“The human body would have an array of small optical sensors implanted beneath the skin in the body areas that need to be controlled. These sensors could be manifested as thin optical threads that are placed at regular intervals over critical muscle and nerve bundles and are linked to a central control area designed to stimulate each node only when the muscles below it are needed.”

According to the study, this could allow wounded soldiers to return to battle with cybernetic muscles that operate better than their meat alone did. It could also allow them to control external tools such as drones and weapons systems not directly attached to their body. Or let someone else control them remotely.

“The optogenetic controller would, in effect, take control of the motions of a warfighters limbs, thereby allowing a novice (i.e., the warfighter) to perform functions professionally.”

You can hear a pin drop

Cybernetic ears will both enhance perception and allow soldiers to access new abilities, according to the Pentagon.

The study imagines that future advances won’t just improve people’s hearing, but also allow for the “conversion and transmission of these signals to others across distances,” the study said. In other words, people could use cybernetic ears to access a network of voices and communication only perceptible to them. It’s like implanting your smartphone inside your ear, complete with real-time translation features for foreign languages.

Hearing loss is a major problem in the military and, for this reason, the researchers believe selling soldiers on enhanced hearing will be easier than eyes and muscles. However, the researchers feel that upgrading ears will be more invasive and less reversible than other technologies and so they recommend that the Pentagon pursue less invasive approaches. . “Electrodes that directly interface with neural pathways could be implanted with a minor surgical procedure and potentially, could be removed with minimal adverse effects,” they said.

The crown jewel of cybernetic enhancement is direct interface between the human brain and machines. The Defense Advanced Research Projects Agency (DARPA) has been working on the technology for years. It has already successfully tested “prosthetic memory chips.” Even Elon Musk is working on neural implants with the goal of “[achieving] symbiosis with artificial intelligence.”

The Pentagon’s study suggests a future where humans with neural implants are jacked into a matrix that allows them to control machines, have machines control them, and to control each other. “The enhancement would not simply entail user control of equipment (brain to machine) but also transmission to operator (machine to brain) and human to human (command and control dynamics) to enhance situational awareness as drone, computational analytical, and human information is relayed to the operator,” it said.

Cybernetically enhanced soldiers could control drones and complicated weapon systems remotely with the power of their mind. The problem is, unlike some of the other technologies discussed, there probably won’t be a non-invasive way to achieve symbiosis between soldier and machine.

Because of that, the researchers suggested that neural links be restricted to an elite class of soldier, like the Navy SEALs, who may be amenable “if they could provide significant improvements in capability, lethality, survivability, and overall battlefield superiority,” they said.

More frightening than negative public perception of cyborgs, which the report goes into, is the Pentagon’s correct assertion that the adoption of technology has outpaced the legal and ethical frameworks that govern society. When a human merges with a machine, should the laws of war still consider it a person or a piece of equipment?

“If an enhanced warfighter is caught and captured, does he have the same protections under the Geneva Convention, and will his enhanced status alter the treatment he is likely to receive?” researchers asked.

There’s also basic questions of national security. Can cyborgs be hacked? What kind of encryption should be used and will it ever be enough? Should a soldier returning home surrender their enhancements? Is it ethical to remove the enhanced muscles that allow a wounded soldier to walk? What will the short and long term health effects of these technologies be? Should military cohorts be integrated with cyborg soldiers or do they need their own units?

“There is so much in the world today that would have seemed like wild science fiction thirty years ago, whether its a computer in your hand on which you could search all the world’s information to a President of the United States using that same computer to push foreign government disinformation,” Peter W. Singer—future war strategist, Senior Fellow at New America, and the author of the forthcoming book Burn-In: A Novel of the Real Robotic Revolution—told Motherboard in an email. “So while not everything in the military’s report on a potential future human-machine fusion in 2050 may come true, we shouldn’t be shocked that some parts of it do.”