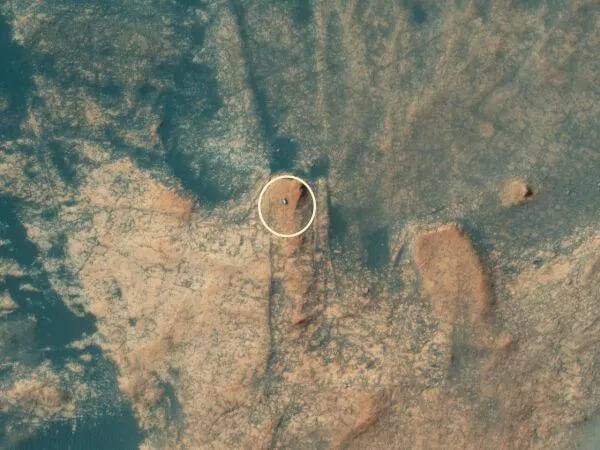 The surprising discovery doesn’t make it any less likely that scientists will find life on the Red Planet.

The HiRISE camera aboard NASA’s Mars Reconnaissance Orbiter captured this photo of the Curiosity rover on April 18, 2021. (Image credit: NASA/JPL-Caltech/UArizona)

Evidence of ancient life may have been scrubbed from parts of Mars, a new NASA study has found.

The space agency’s Curiosity rover made the surprising discovery while investigating clay-rich sedimentary rocks around its landing site in Gale Crater, a former lake that was made when an asteroid struck the Red Planet roughly 3.6 billion years ago.

Clay is a good signpost towards evidence of life because it’s usually created when rocky minerals weather away and rot after contact with water — a key ingredient for life. It is also an excellent material for storing microbial fossils.

But when Curiosity took two samples of ancient mudstone, a sedimentary rock containing clay, from patches of the dried-out lake bed, dated to the same time and place (3.5 billion years ago and just 400m apart), researchers found that one patch contained only half the expected amount of clay minerals. Instead, that patch held a greater quantity of iron oxides, the compounds that give Mars its rusty hue.

The team believes the culprit behind this geological disappearing act is brine: super salty water that leaked into the mineral-rich clay layers and destabilized them, flushing them away and wiping patches of both the geological — and possibly even the biological — record clean.

“We used to think that once these layers of clay minerals formed at the bottom of the lake in Gale Crater, they stayed that way, preserving the moment in time they formed for billions of years,” study lead author Tom Bristow, a researcher at NASA’s Ames Research Center in Mountain View, California, said in a statement. “But later brines broke down these clay minerals in some places — essentially resetting the rock record.”

The rover completed its analysis by drilling into the layers of the Martian rock before using its chemistry and mineralogy instrument, known as CheMin, to investigate the samples.

The process of chemical transformation in sediments is called diagenesis, and it could have created new life beneath Mars even as it erased some of the evidence of the old life on its surface, according to the study authors. So even though old records of life may have been erased in the brine patches, the chemical conditions brought about by the influx of salty water may have enabled more life to spring up in its place, the scientists said.

“These are excellent places to look for evidence of ancient life and gauge habitability,” study co-author John Grotzinger, a geology professor at the California Institute of Technology, said in the statement. “Even though diagenesis may erase the signs of life in the original lake, it creates the chemical gradients necessary to support subsurface life, so we are really excited to have discovered this.”

Curiosity’s mission to Mars began nine years ago, but the rover has continued to study the Red Planet well past its initial two-year mission timeline, to establish the historic habitability of Mars for life. It is now working in collaboration with the new Perseverance Mars rover, which landed in February 2021 and has been tasked with collecting rock and soil samples for a possible return to Earth.

The research done by Curiosity has not only revealed how the Martian climate changed but also helped Perseverance determine which soil samples to collect to increase the odds of finding life.

“We’ve learned something very important: There are some parts of the Martian rock record that aren’t so good at preserving evidence of the planet’s past and possible life,” co-author Ashwin Vasavada, a Curiosity project scientist at NASA’s Jet Propulsion Laboratory in California, said in the statement. “The fortunate thing is, we find both close together in Gale Crater and can use mineralogy to tell which is which.”

The search for life on Mars has been given fresh impetus by a new study that could have triangulated the possible location of the six methane emissions detected by the Curiosity rover during its time in Gale crater, Live Science reported. Since all of the methane in Earth’s atmosphere comes from biological sources, scientists are thrilled to find the gas on Mars.