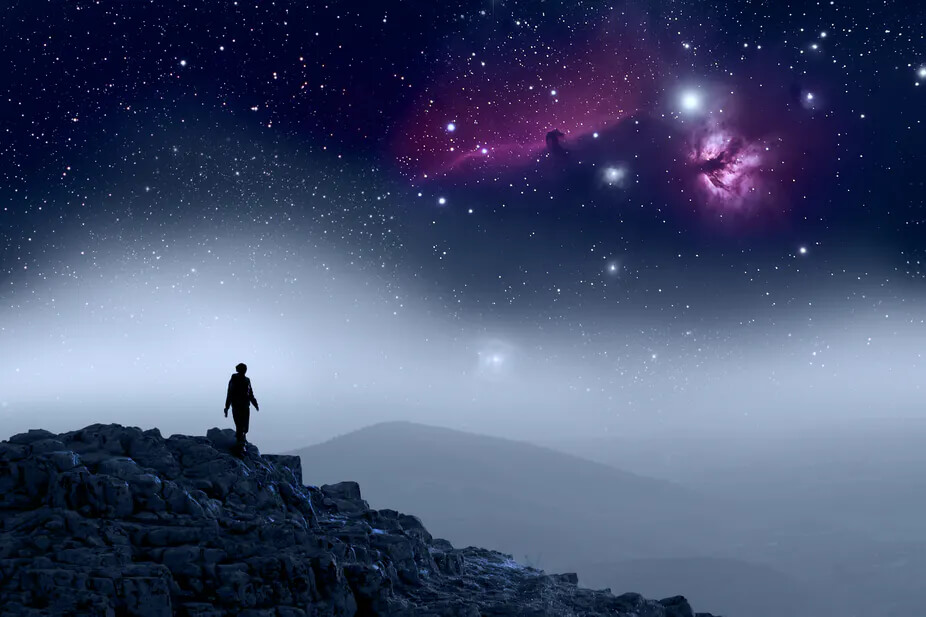 How will humankind react after astronomers hand over rock-solid scientific evidence for the existence of life beyond the Earth? No more speculating. No more wondering. The moment scientists announce this discovery, everything will change. Not least of all, our philosophies and religions will need to incorporate the new information.

Searching for signs of life

Astronomers have now identified thousands of planets in orbit around other stars. At the current rate of discovery, millions more will be found this century.

Having already found the physical planets, astronomers are now searching for our biological neighbors. Over the next fifty years, they will begin the tantalizing, detailed study of millions of planets, looking for evidence of the presence of life on or below the surfaces or in the atmospheres of those planets.

And it’s very likely that astronomers will find it. Despite the fact that more than one-third of Americans surveyed believe that aliens have already visited Earth, the first evidence of life beyond our planet probably won’t be radio signals, little green men or flying saucers. Instead, a 21st century Galileo, using an enormous, 50-meter-diameter telescope, will collect light from the atmospheres of distant planets, looking for the signatures of biologically significant molecules.

The Conversation brings you analysis from scientists and medical doctors.

Astronomers filter that light from far away through spectrometers – high-tech prisms that tease the light apart into its many distinct wavelengths. They’re looking for the telltale fingerprints of molecules that would not exist in abundance in these atmospheres in the absence of living things. The spectroscopic data will tell whether a planet’s environment has been altered in ways that point to biological processes at work.

If we aren’t alone, who are we?

With the discovery in a distant planet’s light spectrum of a chemical that could only be produced by living creatures, humankind will have the opportunity to read a new page in the book of knowledge. We will no longer be speculating about whether other beings exist in the universe. We will know that we not alone.

An affirmative answer to the question “Does life exist anywhere else in the universe beyond Earth?” would raise immediate and profoundly important cosmotheological questions about our place in the universe. If extraterrestrial others exist, then my religion and my religious beliefs and practices might not be universal. If my religion is not universally applicable to all extraterrestrial others, perhaps my religion need not be offered to, let alone forced on, all terrestrial others. Ultimately, we might learn some important lessons applicable here at home just from considering the possibility of life beyond our planet.

In my book, I investigated the sacred writings of the world’s most widely practiced religions, asking what each religion has to say about the uniqueness or non-uniqueness of life on Earth, and how, or if, a particular religion would work on other planets in distant parts of the universe.

Let’s examine a seemingly simple yet exceedingly complex theological question: could extraterrestrials be Christians? If Jesus died in order to redeem humanity from the state of sin into which humans are born, does the death and resurrection of Jesus, on Earth, also redeem other sentient beings from a similar state of sin? If so, why are the extraterrestrials sinful? Is sin built into the very fabric of the space and time of the universe? Or can life exist in parts of the universe without being in a state of sin and therefore without the need of redemption and thus without the need for Christianity? Many different solutions to these puzzles involving Christian theology have been put forward. None of them yet satisfy all Christians.

Mormon scripture clearly teaches that other inhabited worlds exist and that “the inhabitants thereof are begotten sons and daughters unto God” (Doctrines and Covenants 76:24). The Earth, however, is a favored world in Mormonism, because Jesus, as understood by Mormons, lived and was resurrected only on Earth. In addition, Mormon so-called intelligences can only achieve their own spiritual goals during their lives on Earth, not during lifetimes on other worlds. Thus, for Mormons, the Earth might not be the physical center of the universe but it is the most favored place in the universe. Such a view implies that all other worlds are, somehow, lesser worlds than Earth.

Members of the Bahá’í Faith have a view of the universe that has no bias for or against the Earth as a special place or for against humans as a special sentient species. The principles of the Bahá’í Faith – unifying society, abandoning prejudice, equalizing opportunities for all people, eliminating poverty – are about humans on Earth. The Bahá’í faithful would expect any creatures anywhere in the universe to worship the same God as do humans, but to do so according to their own, world-specific ways.

The pillars of the faith for Muslims require the faithful to pray five times every day while facing Mecca. Because determining the direction of Mecca correctly could be extremely difficult on a quickly spinning planet millions of light years from Earth, practicing the same faith on another world might not make any sense. Yet the words of the Qu’ran tell us that “Whatever beings there are in the heavens and the earth do prostrate themselves to Allah” (13:15). Can terrestrial Muslims accept that the prophetically revealed religion of Muhammad is intended only for humans on earth and that other worlds would have their own prophets?

At certain moments throughout history, astronomers’ discoveries have exerted an outsized influence on human culture. Ancient Greek astronomers unflattened the Earth – though many then chose to forget this knowledge. Renaissance scholars Copernicus and Galileo put the Earth in motion around the Sun and moved humans away from the center of the universe. In the 20th century, Edwin Hubble eliminated the very idea that the universe has any center at all. He demonstrated that what the universe has is a beginning in time and that, bizarrely, the universe, the very fabric of three-dimensional space, is expanding.

Clearly, when astronomers offer the world bold new ideas, they don’t mess around. Another such paradigm-shattering new idea may be in the light arriving at our telescopes now.

No matter which (a)theistic background informs your theology, you may have to wrestle with the data astronomers will be bringing to houses of worship in the very near future. You will need to ask: Is my God the God of the entire universe? Is my religion a terrestrial or a universal religion? As people work to reconcile the discovery of extrasolar life with their theological and philosophical worldviews, adapting to the news of life beyond Earth will be discomfiting and perhaps even disruptive.