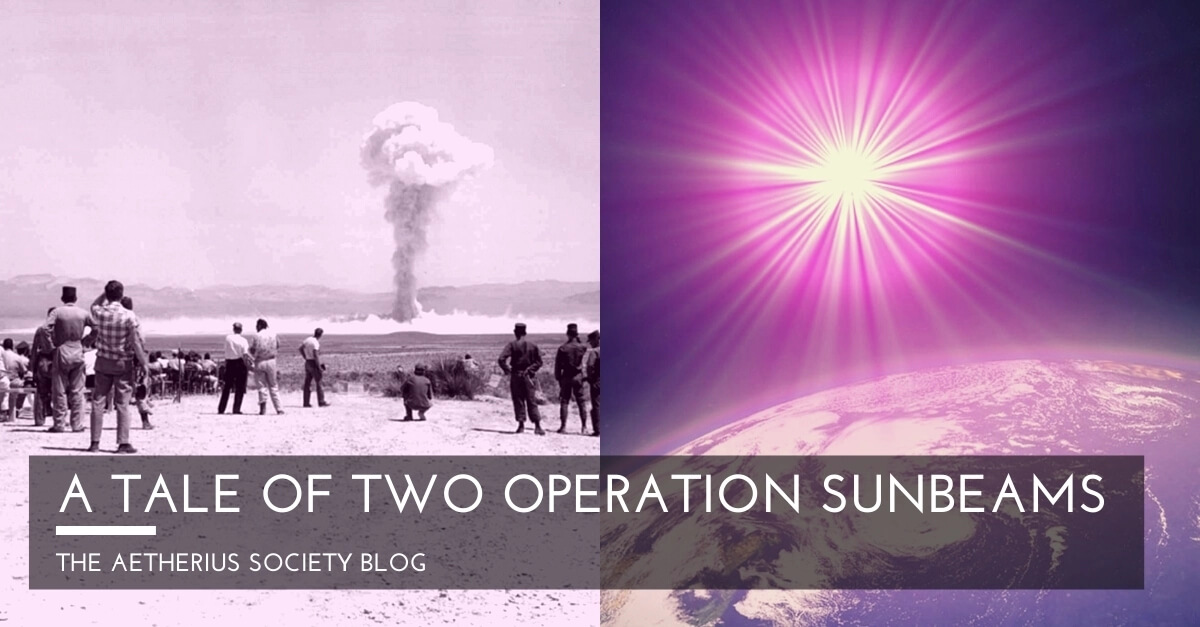 Starting with one of the worst, in 1962, for example, something terrible happened.

In the Nevada desert in the United States, a series of four nuclear tests took place.

Unfortunately, nuclear tests weren’t an uncommon occurrence at the time. There had been many such tests in the preceding years, and over 2,000 have taken place around the world to date.

The US military named this particular series of four tests: Operation Sunbeam. Image: A crowd watches one of a series of four nuclear tests in the Nevada desert in 1962.

These tests were an act of black magic; a horrendous act with a horrendous motive – testing of a foul, vicious weapon designed to kill large numbers of people in a brutal manner.

They were performed with immense financial backing of the US government and the vast resources of its military.

They were reported around the world. They were front page news, the leading story in major papers.

Even though these detonations took place for testing purposes, they still caused pain and suffering as the fallout from nuclear tests has been linked to cancer. The day after one of these nuclear tests, the front page of the Los Angeles Times reported the absurd heading: “Towering Dust Cloud Rises to 12,000 Ft.; Radiation Level Safe.” How could a 12,000-foot high cloud of radioactive dust possibly be considered safe?! Some radioactivity from nuclear tests in the 1950s and 1960s is still detectable even today. Image: The day after one of these nuclear tests, the Los Angeles Times reported the absurd heading: “Towering Dust Cloud Rises to 12,000 Ft.; Radiation Level Safe.”

The Cosmic Masters who spoke through the yogic mediumship of Dr. George King frequently warned of the grave consequences of nuclear experimentation. In 1955, a Cosmic Master with the pseudonym of Mars Sector 6 put it this way:

We are concerned about the release of strontium through thermo-nuclear fission. These strontium deposits will travel around your Earth, and will settle in reservoirs and on arable land. Strontium has certain properties rather like calcium. This radio-active material has a life of 35 years. It can be taken into plant life and animal life, so that when this food is eaten by terrestrial people, the strontium will be absorbed directly into the bloodstream, nervous system and the bone structure, especially the latter. This will cause mutation of the bone structure and cancer of the bone. Only by a complete tuning-in during and just after the Magnetization Periods can you immunize yourselves against the mutative effects otherwise brought about by radio-active strontium absorption.

Treat this seriously, for we are going out of our way to give you this information. I do not say that I represent the first source of this information—if you have been given it before, then I can only substantiate the danger of this. We know, because we are able to measure with very sensitive instruments the genetic effects of radio-active strontium release within the filterisation units of Terra. Your scientists can measure one octave of radiation only—they know nothing of SIX OTHER OCTAVES of this radiation.

Nuclear tests and the weapons resulting from them are a black mark against the human race.

At completely the opposite end of the scale to these tests is the legacy of Dr. George King, particularly in the form of Cosmic Missions. These allow representatives of the human race to cooperate with Cosmic Intelligence’s in service to humanity and the Mother Earth.

Why service to the planet? Dr. King and the Cosmic Masters that spoke through him taught that the Mother Earth is a living being. As Dr. King said in his book Visit To The Logos Of Earth:

This Planet is a living, breathing Entity. It is an ancient and, in comparison with man, very advanced Entity. It is a female Entity. The mass of liquid which covers most of the surface of this Planet and which, in deep occult circles, represents psychic power, illustrates that the Life Stream, or Logos, of this Planet is female in character. Unlike certain other Planets in this Solar System, Earth is very temperate in environmental conditions and is continually promoting the growth of vegetation, animals and human bodies alike. Another striking indication of Her female characteristics. Some Planets, male in character, are, from a temperature point of view, not nearly as temperate, neither is Their surface covered by vast stretches of water and vegetation. Even though such Planets are habitable, They can only be inhabited by entities advanced enough to live under such conditions. Another definite indication of the female characteristics of our Logos—continual promotion and propagation of life in multitudinous forms from Her body is perpetually taking place. We are told that because of the extreme fertility of Earth, it is, in many respects, the most pleasant Planet upon which to live.

This great and majestic Goddess has helped humanity for eons by providing us a place to live – and not just any place, but “in many respects, the most pleasant Planet upon which to live” in this Solar System. But she suffers greatly as a result of this – we dam her rivers, create mines, and pollute on a global scale. Worse than this, we have detonated nuclear weapons in the air, at ground level and even underground, within her body. The presence of the human race on planet Earth has led to a gradual poisoning of the environment.

In 1966, four years after the series of nuclear tests described above, Dr. George King announced a new Cosmic Mission.

This Mission involved the radiation of spiritual energy into certain psychic centers of the Mother Earth as a token repayment for all that we have taken from her. One of these psychic centers is in Utah which is a neighboring state to Nevada and the aforementioned nuclear test site. While it shared the same name as the nuclear tests, in all other ways it couldn’t be more different.

Dr. King’s Operation Sunbeam was a Divine and inspired invention.

The energy sent to the Mother Earth in Dr. King’s Operation Sunbeam is a token gesture of repayment. We owe her so much that we can never repay her. But even though it is a token gesture, because of the genius of Dr. King, it is still an incredibly potent karmic tool to help our world.

Dr. King wrote about it as follows in his book Visit To The Logos Of Earth:

In the beginning I recognized “Operation Sunbeam” as an ecological tool which would gradually, but nonetheless surely, start to manipulate the heavy negative Karma which the masses had brought onto their shoulders by their unappreciative and thoughtless rape of a green, beautiful and Holy Planet. Through life after life the masses had been born and reborn on this Earth—which should have been regarded as a living Temple of the living God—and yet how seldom throughout those centuries have even the few thanked their God and The Logos Of Earth for providing such a beautiful classroom in which to learn their evolutionary lessons. In my humble estimation, such a happening is unbelievable but, I regret to say, very true. If you want a demonstration of gross ignorance on the part of the inhabitants of a magnificent world, then this surely must be an horrific illustration of this.

Unlike the nuclear tests, Dr. King’s Operation Sunbeam was performed on a shoestring budget with only a small team of people involved and it received very little in the way of media coverage. Even today, few know about this mission and even fewer appreciate it or attempt to support it in any way.

Dr. King’s Operation Sunbeam also had some quite incredible consequences which he did not foresee.

When other worlds heard about what Dr. King had created, they were amazed and inspired. They saw that if a backward barbaric race like us – the kind of people capable of creating a devastating death weapon like a nuclear bomb – could perform a mission as great as Dr. King’s Operation Sunbeam, then they too felt they could do it.

Throughout the galaxy, people living on other planets were inspired to perform their own version of this Cosmic Mission upon their own worlds, and thus help their own people and the hundreds of planets upon whom they resided. One man’s idea on Earth had consequences that rippled throughout the galaxy.

The advanced beings living on other planets in our Solar System have monitored events on Earth throughout our history. They monitored our nuclear tests, concerned about the negative impact they would have. Humanity has a very dark history in relation to nuclear activity. This can be found spelled out very clearly by Dr. King in the introduction to The Nine Freedoms.

Dr. King’s Operation Sunbeam was also closely watched by extraterrestrials, but not out of concern. They observed it because it was an inspiring achievement. Even though this Operation Sunbeam received little media coverage on Earth, it was reported in far higher and more illustrious places elsewhere in the galaxy.

But even more than monitoring it, extraterrestrials actively participate in this Mission and they consider it a great privilege to be able to do so. This cosmic cooperation established by Dr. King continues to this day with Operation Sunbeam being regularly performed in the British Isles and the United States by The Aetherius Society, with 878 Phases performed to date. Since its inception, Dr. King oversaw various enhancements and it is now even more potent than it was when it inspired the galaxy.

On December 18th, 1966, only a matter of months after Dr. King had announced his Operation Sunbeam, the Master Aetherius said the following:

So you see, ladies and gentlemen, here we have a Cosmic snowball, virtually, something which has almost gone out of all proportion – certainly out of proportion to what it was originally intended. Not only will a token – a very small insignificant token, but nevertheless a token of energy, be given back to the Logos of Terra, but also to hundreds of other of Logoi throughout the Galaxy—-!

This is, of course, very wonderful. This shows that, despite the savagery of a race, initially, that race is still Divine. Despite the testing of ‘murder bombs’ allegedly for peace purposes, a few individuals are reaching inward to break the veil around the lights of their Divinity. As I have told you so many times before, you do not know exactly what you are doing when you do this. Look at what has happened now. A few of you decided to accept OPERATION SUNBEAM, having not any idea that your action would even be an inspiration to the other worlds.

But I will tell you this, before my Maker, it has been so.

So there you have probably one of the strangest messages ever given to Terra at any time in Her history – but certainly one of the most hopeful.

OPERATION SUNBEAM will continue and it must — despite all odds — ALL odds no matter what they be — continue for it will be watched by others who need this type of thought to give them confidence to do their equivalent of this Operation upon their worlds.