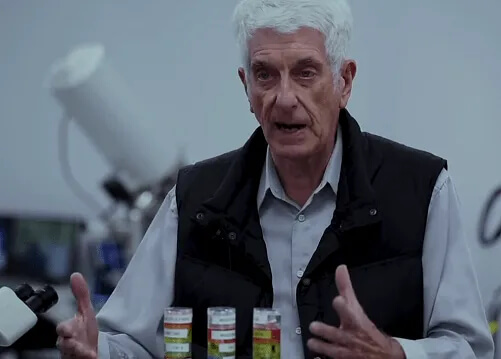 In the 60 years of the UFO experience in the United States, Dr. Jacques Vallée studied the essence of flying saucers very closely. He is one of the few researchers who researched the UFO activities, including its material. He collected UFO debris from several UFO crashes, examined them in the lab, and found out that they had not been made on Earth.

Dr. Jacques Vallée was born in France. He finished his M.S. in astrophysics at Lille University. Later, he went to the United States and done his Ph.D. in computer science in the Northwestern University. He was also the senior researcher at the DARPA-funded Augmentation Research Center at SRI.

Dr. Jacques Vallée is one of the few people who added integrity to the Ufology. When others called the UFO encounters a hoax, Vallée explained it scientifically. During his interview in 1986, he said that UFOs are a “physical object that interacts with the environment that causes effects on the witnesses on the psychology and the physiology and leaves traces on the ground and yet are capable of appeared to be manipulating time and space in ways that go beyond what our physics understands.”

He said that the UFO emits much energy in a small place, manipulating space and time and cause delusion impact on witnesses’ subconscious mind. Dr. Vallée found his interest in the UFOs after he encountered one himself in May 1955 over his Pontoise home in France. While he was working as an astronomer, the tapes that recorded the unknown objects orbiting Earth were destroyed.

His role in the UFO study enlightened after he joined Dr. Allen J. Hynek in the US Air Force’s UFO investigation program known as Project Blue Book. Dr. Vallée wrote a number of ground-breaking books on the UFO phenomenon including Passport to Magonia, Wonders in the Sky, Dimensions, Forbidden Science, and The Invisible College. He has a totally different perspective in acknowledging these unknown crafts.

He assumed that what people experienced during a UFO encounter now could have also been noticed in the past and noted as signs from God. He said he would be disappointed if the UFOs are not much more than just an interstellar spaceship.

He believes the UFOs manipulate the witness’ belief system. He said: “There was, in fact, a manipulation taking place and that it was not a hoax on the part of the witnesses but in hopes on the part of somebody much better organized so there possibly all of these levels going on simultaneously.”

Dr. Vallée suggested that the UFO phenomenon can be studied in six layers of information that can potentially lead to breakthroughs in physics:

During the Global Competitiveness Forum in 2011, Dr. Vallée explained why the UFO phenomenon should be taken seriously and studied according to science. He discussed two UFO encounters that occurred in France in the 1950s where the unknown source of light moved at such an incredible speed and great flexibility that is still hard to achieve with current technology.

He believed that the technology UFO use could possibly be obtained by humans in the future. He urged the scientific community to show an interest in the study of UFOs without pre-judging its nature.

Dr. Vallée collected professed metal from the UFO cases dated back to 1947 and bought them to Stanford University for analysis. Dr. Gary Nolan, a Stanford microbiologist analyzed the 3-D atomic structure of the unknown metal with a state-of-the-art Multi-parameter Ion Beam Imager (MIBI) capable of discerning the precise composition of matter at the level of its isotopes.

The result might be shocking for non-believers as when he put the sample in the vacuum chamber of the machine, he found out that their composition was unlike any other known metal on Earth.

“If you’re talking about an advanced material from an advanced civilization you’re talking about something that I’ll just call it an ultra material right it’s something which has properties where somebody is putting it together again at the atomic scale so we’re building our world with 80 elements somebody else is building the world with 253 different isotopes,” Dr. Nolan said.

Meanwhile, Dr. Vallée insisted that these materials are not natural, they were manufactured for some special purpose either on Earth or outer space.

Here is the footage from 1975 where Dr. Vallée is explaining the UFO that moves with extreme acceleration:

Dr Jacques Vallee presents footage of a Ufo in 1975 with extreme acceleration
Please remember we all have different opinions, Think Before You Speak or Write Something that is cruel to Others. After all, We are only Humans. Wishing you clear skies and wide eyes. To share your experiences or just leave a comment there is a area below. Read or listen.