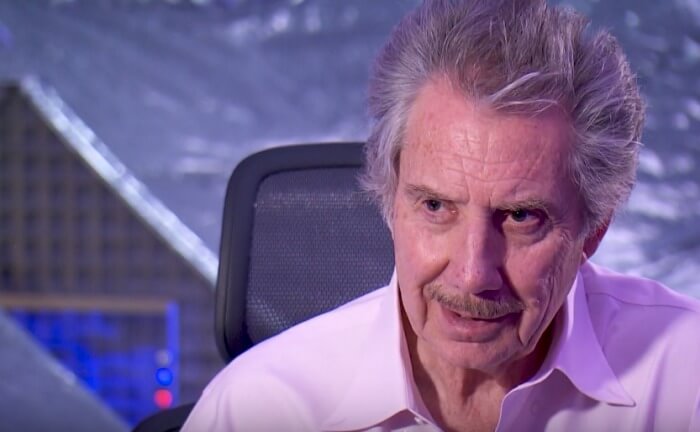 “I can’t think of anything that comes close that mankind has even started to approach that even remotely equals the dynamics of that subject.”

Edit: I linked to the new Bigelow interview (it was just posted) and provided a partial transcript below.

I highly recommend the rest of this podcast. Hearing Knapp and Bob Stoldal talk about how the local, mammoth series, “UFOs: The Best Evidence,” came together is worth the listen alone. Fantastic history for anybody interested in the UFO subject. KLAS took a risk, ignored the recommended formula and it paid off for them.

Ron Futrell (RF) : We’re going to exclusively put some video with Bob Bigelow on YouTube, initially. And he’s gonna tell us what, George?

George Knapp (GK) : Well let me tell you how Bob Bigelow is, first. I think he’s maybe the most important person in the history of the UFO study. Because he spent more money than any individual in the history of the world on the pursuit on this topic. Tens of millions of dollars out of his own pocket, to figure it out. He established his own scientific institute, the National Institute for Discovery Science in the nineties. He had a program…got a contract from the Defense Intelligence Agency in the aughts that was looking at Skinwalker Ranch, UFOs, cattle mutilations…a lot of related topics.

He is still deeply interested in this. But, since December of 2017 – when the New York Times came out with this blockbuster story about the existence of a program called AATIP, the release of these videos through Tom DeLonge and his To The Stars Academy that have been verified by the U.S. government as being legit, and from the U.S. Navy – Bob Bigelow hasn’t said anything. He’s made comments before. He was interviewed famously on “60 Minutes” where he said, I think the aliens are already here and I don’t care if anybody thinks I’m crazy or not. But since December of 2017, he’s made no public comments about the UFO scene.

I got a chance to sit down with him. I interviewed him about his space program, about Bigelow Aerospace and endeavors and projects it’s got going with NASA. And in the middle of that, I asked him. “Hey, what do you make of the scene here, the AATIP, AAWSAP news? All the attention, the coverage that it’s getting from mainstream media? And we are gonna put that clip, that five-minute conversation on our YouTube page and that’s where it’s gonna be. Sort of the world premiere.

GK: Oh, he was right in the mix. He got the contract. He created something called BAASS – Bigelow Advanced Aeropace Systems  and it got the contract from the DIA, a program called AAWSAP – Advanced Aerospace Weapons…I forget what the whole acronym thing is. But that was the contract that was awarded to him. It eventually evolved or morphed into what we now know as AATIP, which is a much smaller program, with a much smaller focus that looks at military encounters with unknown aircraft. But Bigelow’s program was much broader, much bigger. It’s an exciting time. There’s a lot of stuff going on.

George Knapp: I meant your other interest that the public knows you for. The esoteric topics.

Bob Bigelow: Oh. The unidentified objects that people wonder what are flying around?

GK: You miss that?

BB: Sure I do. Sure I do. Because it’s the epitome of potential that we are barely able to even sniff at. And the magnitude of that is so profound in so many different ways, that I can’t think of anything that comes close that mankind has even started to approach that even remotely equals the dynamics of that subject. It’s beyond belief.

BB: Yeah, and then even beyond that, because we don’t even know, we may only even see the bare tip of the iceberg on that, as you know. And I don’t think we even fully realize at all what is possible.

Watch the full interview at the YouTube link above. I’ll post the full transcript in a few days. It’s always nice to see video of a person so you can get a feel for body language and look at their facial expressions. Some people still see this man as our enemy. SMH.

Great article I wanted to share, I hope you enjoy and check his other articles.