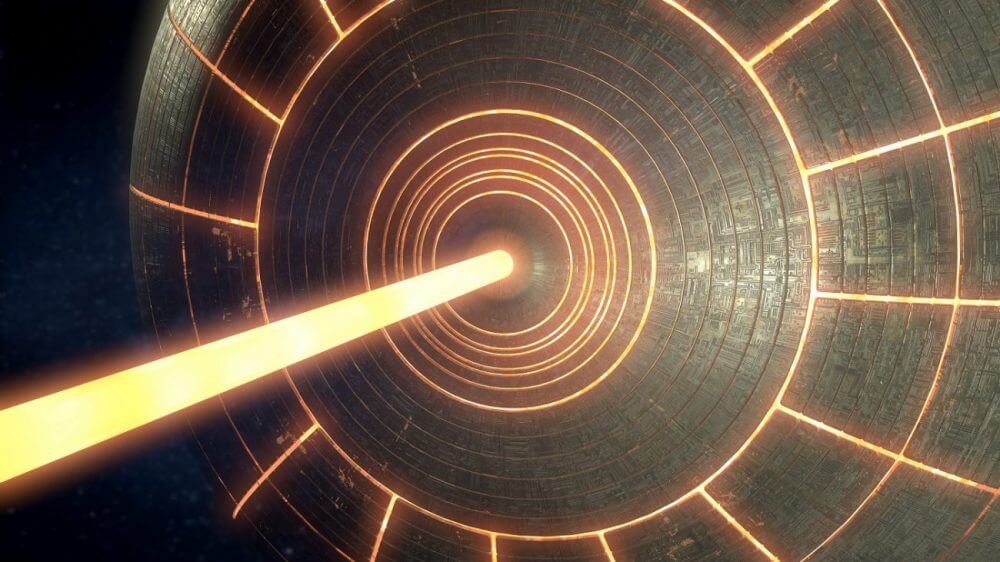 If there are alien civilizations out there, some of them probably developed interstellar travel, allowing them to visit different solar systems with ease.

If they have, they surely must have advanced their communication systems, allowing them to exchange data across vast distances.

Now, researchers argue that advanced civilizations in the universe may be able to communicate through neutrino beams, transmitted by constellations of satellites around neutron stars or black holes.

The idea of Dyson’s sphere-like megastructures ‘built’ as cosmic beacons depends on where an extraterrestrial civilization might fit on the Kardashev Scale (that is, whether they are a planetary, stellar or galactic civilization).

In this case, Albert Jackson, a researcher from the technological Triton Systems, suggests that a Type II civilization may be able to enclose a neutron star or a black hole through the creation of a vast constellation of neutrino transmitting satellites.

Jackson begins his study – published in arXiv – with a quote from Freeman Dyson’s 1966 essay,

“The Search for Extraterrestrial Technology,” where he summarized his goals: So the first rule of my game is: think of the biggest possible artificial activities with limits set only by the laws of physics and look for those.”

In a previous study, Jackson suggested how advanced civilizations could use smaller black holes as gravitational lenses to send gravitational wave signals through the galaxy as a way of transmitting information.

In another article, he also ventured how a sufficiently advanced alien civilization may be able to use the same type of lens to construct a laser beacon.

In both cases, the technological requirements would be massive, and would most likely require an enormous infrastructure at a stellar scale mankind can’t even imagine.

Taking this theory one step further, Jackson explores the possibility that neutrinos are used to transmit information, since, like gravitational waves, they travel well through the interstellar medium.

Compared with focused beams of photons (also known as lasers), neutrinos have several advantages regarding beacons.

As Jackson told Universe Today via e-mail: “Neutrinos arrive almost without attenuation from any source direction, this would have [a] big advantage in the Galactic plane. Photons in wavelengths like the infrared are also good with gas and dust (why the Webb is an IR scope) still there is some absorption. Neutrinos can travel across the universe almost without absorption.”

As for the process by which such a beacon could be created, Jackson once again refers to Freeman Dyson’s rule about how the most advanced civilizations could create any megastructure.

This rule is simple: “if physics allows it, it may be technologically feasible.”

In the case of a Type II civilization, the engineering requirements would be beyond our comprehension, but the principle remains solid.

The concept takes advantage of a phenomenon known as a gravitational lens, where scientists rely on the presence of a massive intervening object to focus and magnify the light coming from a more distant object.

In this case, the light source would be the neutrinos, and the effect of focusing them would make a stronger beacon signal.

A black hole or a neutron star is a gravitational lens; this lens focuses the neutrinos in an intense beam.

This beam, when viewed from a distance, is so “adjusted” that one has to place a constellation of neutrino transmitters on the gravitational lens to obtain an approximate isotropic transmitter.

“In this case, the number of “transmitters” is about ten raised to 18 or about a billion times the number of stars in the Milky Way galaxy,” explains Jackson.

Like the construction of a Dyson Sphere, this type of an engineering project would only be possible for an advanced civilization that has managed to evolve becoming a Type II civilization; in other words, a civilization that has the ability to harness and channel the energy radiated by its own star, which amounts to approximately 4 * 1026 watts of energy, which is several billion times what humanity currently consumes each year.

Another exciting possibility that arises from this is its implications for SETI.

Since a sufficiently advanced extraterrestrial species could communicate through the neutrinos, scientists could use the existing detectors to identify the sources.

In this regard, we could add neutrino beams focused on the list of possible “techno-signatures,” that is, signs of technological activity, which are being sought by SETI researchers.

“There are a number of ‘neutrino telescopes’ around the world,” Jackson stated.

“If an advanced civilization beacon exists it could produce a very anomalous number of neutrino events, way above the natural sources of neutrinos such [as] the sun or supernova.. this would be an addition to the candidates for signs of advanced technological activity.”