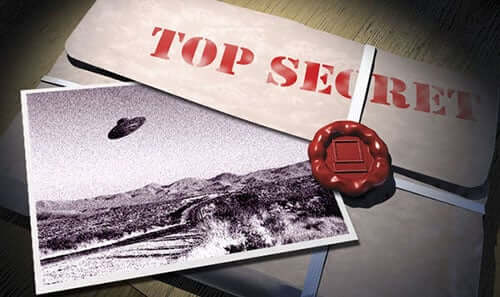 Fortunately for us, not all individuals are the same. Some seek redemption after a life of sins, others lose their minds or even commit suicide but, there is also the case when an individual is stronger than the rest and he seeks to enlighten the rest of us, divulging secret information he had access to.

In a situation such as this, they are either considered delirious or absurd or they are assassinated (sooner or later).

This particular case captured our attention because it describes a secret UFO organization and talked about relevant data concerning extraterrestrial situations along the years. Milton William Cooper was a member of the Intelligence Briefing Team of the Commander in Chief of the Pacific Fleet or in other words he worked for the Navy.

On July 2, 1989, in Las Vegas, Nevada, he unveiled TOP Secret information regarding the Government secret agency MJ-12 or MAJIC 12.

He stated that the source of the material was an ONI (Office of Naval Intelligence) counter intelligence operation against MJ-12 in order for the Navy to find out the truth. It seems that at that point, the Navy was not pleased that they were not part of the “real action” so they decided to get involved in order to obtain some new pieces of technology designed using the exploited aliens the Government had in captivity as well as involvement into some of the secret projects.

I, Milton William Cooper, do solemnly swear that the information contained in this file is true and correct to the best of my knowledge. I swear that I saw this information in 1972 in the performance of my duties as a member of Intelligence Briefing Team of the Commander in Chief of the Pacific Fleet as a Petty Officer in the US Navy. I swear that I underwent hypnotic regression in order to make the information as accurate as possible.

Here is the list with key words he provided, containing top secret information involving the CIA, NSA, MJ-12, Presidents of the US, alive aliens, UFOs and weapons of mass destruction:

• GRUDGE – Contains 16 volumes of documented information collected from the beginning of the United States’ investigation of UFOs and IAC – Identified Alien Crafts. The project was funded by CIA confidential funds and money from the illicit drug trade. The purpose of project GRUDGE was to collect all scientific, technological, medical and intelligent information from UFO and IAC sightings and contacts with alien life forms. This orderly file of collected information has been used to advance the United States Space Program. • MJ-12 is a secret control group. President Eisenhower authorized a secret society known as The Jason Society in order to sift through all the facts, evidence. Technology. Lies and deception and find the true answer behind the alien question. The society was made up of 32 of the most prominent men in the country in 1972 and the top 12 members were designated MJ-12. MAJIC 12 has total control of everything, they are nominated by the code J-1, J-2, J-3, all the way through the members of the Jason Society.

• MJ-12 assassinated President Kennedy when he informed them that he was going to tell the public all the facts regarding the alien presence. He was killed by the Secret Service agent driving his car and it is clearly visible in the film withheld from the public view. A secret meeting was constructed for MJ-12 in Maryland and it was described as only accessible by air. It contained full living, recreational and other facilities for MJ-12 and the Jason Society. It is code named “The Country Club”

• AQUARIUS – is a project which compiled the history of alien presence and their interaction with Homo sapiens upon this planet for the last 25,000 years and culminating with the Basque people who live in the mountainous country on the border of France and Spain and the Syrians.

• POUNCE – is the project formed to recover all downed or crashed craft and aliens.

• REDLIGHT – is the project to test fly recovered alien craft. It is conducted at AREA 51 in Nevada. It was jump-started when the aliens gave us craft and helped us fly them. The initial project was somehow successful in that we flew a recovered craft but it blew up in the air and the pilots were killed. The project was suspended at that time until the aliens agreed to help us.

LUNA – is the alien base on the far side of the Moon. It was seen and filmed by the Apollo Astronauts. A base, a mining operation using very large machines and the very large alien craft described in sighting reports as Motherships exist there.

• EXCALIBUR – is a weapon to destroy the alien underground bases. It is a missile capable of penetrating 3,000+ feet of hard packed soil such as that found in New Mexico with no operational damage.

• ALIENS – there were 4 types of aliens mentioned in the papers:

· A LARGE NOSED GREY with whom humans have a treaty

· A blond human-like type described as the NORDIC

• EBE (Extraterrestrial Biological Entity) – is the name given to the live alien captured at the 1947 Roswell crash who died in captivity. • KRLL or KRLLL – was the hostage left with us at the first Holloman landing as a pledge that aliens would carry out their part of the basic agreement reached during the meeting. KRLL became sick and was nursed by Dr. G. Mendoza who became the expert in alien biology and medicine. KRLL later died.

• RELIGION – Aliens claim to have crated Homo Sapiens through hybridization. The papers said that RH blood was proof of this. They further claimed to have created all of our major religions. They showed a hologram of the crucifixion of Christ which the Government filmed. They claimed that Jesus was created by them.

• CRAFT RECOVERIES – The documents stated that many craft had been recovered. The early ones from Roswell, Texas, Mexico and other places. • ABDUCTIONS – were occurring long before 1972. The document stated that humans and animals were being abducted and or mutilated. Many vanished without trace. They were taking sperm and ova samples, tissue, performed surgical operations, implanted a spherical device 40 to 80 microns in size near the optic nerve in the brain and all attempts to remove it resulted in the death of the patient. The document estimated that 1 in every 40 people had been implanted. The implant was said to give the aliens total control of that human.

• MURDER – The documents stated that many military and government personnel had been terminated when they attempted to reveal the secret.

William Cooper supported his claims until he was killed by the Apache County Sheriff Department during a raid on his home in Eagar, Arizona, on November 5, 2001. He supported the search for truth and paid the ultimate price in his attempt.

We have been taught lies. Reality is not at all what we perceive it to be. We cannot survive any longer by hanging onto the falsehoods of the past. Reality must be discerned at all costs if we are to be a part of the future. Truth must prevail in all instances, no matter who it hurts or helps, if we are to continue to live upon this earth.