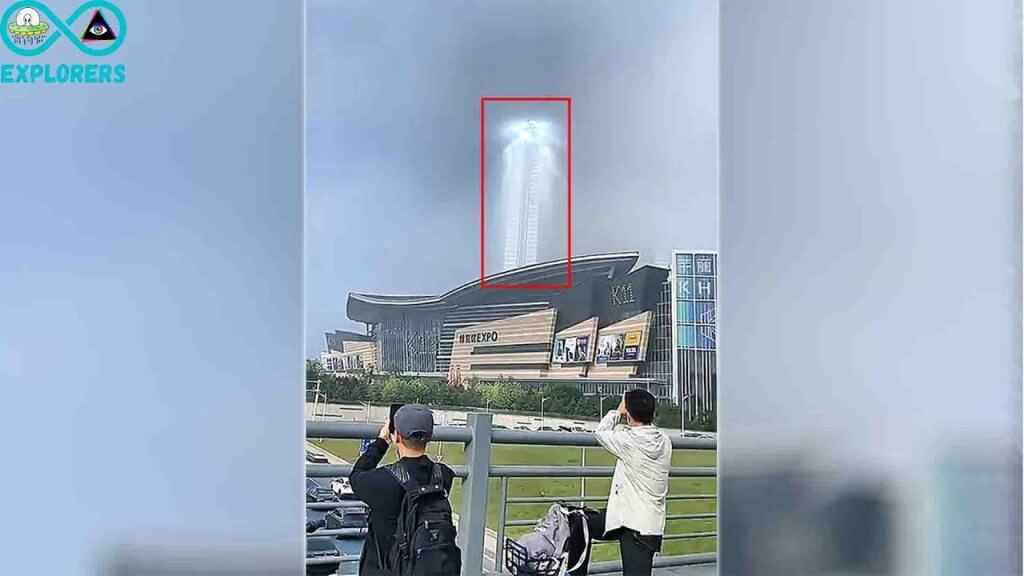 On the morning of September 8, a mysterious phenomenon appeared over the city of Shenyang, China. A huge beam of light was shining from the sky and there were horizontal lines like a ladder between the rafters. The strange scene caused people to take out their mobile phones to take pictures and record videos.

In one of the videos, a considerable beam of light can be seen hovering over a building, while the people standing there show their amazement. And after the witnesses shared the images on social networks, a veritable tsunami of comments began, with some citizens assuring that it was clearly a portal to another dimension . But it seems that the Chinese authorities rushed to give a logical and rational explanation for the mysterious phenomenon, mainly to avoid panic among the population.

How could it be otherwise, the Chinese meteorologists discarded this theory and explained the cause of the unusual spectacle. Xia Chuandong, head of the Shenyang Meteorological Office, told the NewTalk news portal that this ray of light is a real celestial phenomenon because the clouds there are thinner, the surrounding area is thicker and the humidity is relatively high. After the sun is irradiated, it causes what we see, a phenomenon of light rays.

Chuandong pointed out that the brightest place in the sky is not the sun, because that direction is west. And this phenomenon appeared in the morning, with the sun in the eastern sky on the other side. And even in the afternoon, the sun will not appear in that place, because Shenyang has a higher latitude , located at 41 ° north. The sun will only appear in the sky near the south, and it will not appear at such a high altitude.

As the Chinese meteorologist continues, there seemed to be a lot of fog that day, and the fog obscured some buildings in the distance. From the usual panoramic map from the same angle (taken in September 2019), there are two high-rise buildings behind the department store. On the day the ray of light appeared, the two buildings were invisible. According to the comparison chart, the reason the light beam looks like a staircase is that we see the side of a building .

Also, some can be seen vaguely at the bottom right of the building, and the rest are covered in dense fog. Such a “coincidence” has created a spectacle that seems a bit unreal, like the special effects by computer.

And in case anyone still had any doubts, Chuandong said that this is not the first time that this more than surprising phenomenon has occurred.

A similar phenomenon appeared a few days ago in Shuangfeng County , Hunan Province. The sun was shining on the clouds, producing multiple rays of light, and a bright scene appeared. In fact, this is caused by the “Tyndall effect”, a physical phenomenon that causes colloidal particles in a solution or gas to be visible by scattering light.

The meteorologist explained that when there are many small droplets or particles suspended as dust in the air, as long as their diameter is shorter than the wavelength of visible light (380 to 750 nanometers), the sunlight will pass through. These particles scatter in all directions, creating the beam of light that we see. In space, because the environment is almost empty, light will propagate forward without scattering.

“If we turn on the flashlight in an empty space, we will not see the light shining forward, because the light will not be scattered or reflected in our eyes,”Chuandong concludes.

But not everyone agrees with the explanation offered by the head of the Shenyang Meteorological Office. In recent years China has become the epicenter of this type of strange phenomena , such as strange pillars of light or floating cities , which are witnessed by thousands of people. One of the most popular theories in social networks is that China would be using some kind of technology that would allow them to communicate with other dimensions, with the sole intention of manipulating our reality. It may seem crazy, but if you think about it, in the moments we are in, anything is possible.

What do you think about the mysterious pillar of light over the Chinese city? Optical phenomenon, access to a parallel universe or do you have another explanation?