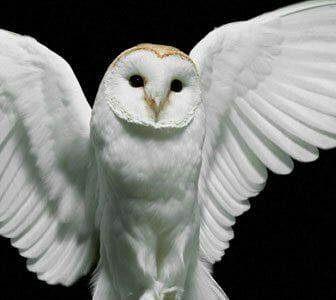 The owl is an indication of inner knowledge, psychic ability, clarity, family, sacrifice and illumination. It often indicates a prophecy or some type of fulfillment. In many cases, the owl is a sign of fresh starts, new beginnings and the need to move forward in life.

Always take note of the things in your life that may hold spiritual significance. When I lived in a house in Tupelo, Ms on William Drive, we had a white Owl that perched under our back porch every night for 5 years. We never startled the owl when coming or going outside nor it bother us. It was a beautiful owl. To me the Owl seemed like a watcher and very interested in my family. My dog never barked or showed any interest in it, which was odd. This was from 1987 until 1992. I was drawn to its dark almond shaped eyes which reminded me of the Greys. When we finally moved it didn’t move with us. I never saw it again.

What is the spiritual meaning of a white owl? Everyone has their own intuitive and spiritual language, so a white owl may have a certain meaning for you and you alone. However, in general, seeing a white owl is a reminder that nothing lasts forever. Even the hardship you are going through will pass away eventually.

White owls are the marker of the ending of something, leading to the birth of something else. They are spiritual masters that remind you to pay attention to the lessons you learned so that you can continue to grow and evolve on your spiritual journey.

If you are seeing a white owl repeatedly, it may be a sign that you need to take the necessary steps to end something in your life that is not serving you, so that you can open the opportunities for something better to come in.

For example, you may need to trust the universe that if you quit a job you dislike, a better job will be out there. Or if you end an unhealthy relationship, a better relationship will come into your life. Or if you take a financial risk and choose to invest in yourself, your courage will be rewarded tenfold.

Meaning of a White Owl Crossing Your Path

Similar to seeing a white owl, having a white owl cross your path is something that makes you stop and enter into the present moment.

White owls crossing your path are a way to get your attention. It is rare for an owl to hear you and to fly towards you rather than stay still in hopes you will not see it.

The spiritual meaning of an owl crossing your path is a message that you are ignoring opportunities to bring change and evolution in your life, for the sake of staying comfortable or being fearful of the unknown.

It is also a message that is letting you know that if you don’t choose to make the difficult decisions to end things in your life that aren’t serving you, the universe will step in and make those choices for you. This is often a lot harder to handle, and the lessons take longer to learn.

For example, let’s say you know you should quit your job because it is holding you back from your true potential; However, you continue to stay at your job because you are fearful of quitting and facing the unknown. If a white owl crosses your path while you are worried about this, pay attention.

This may be a spiritual sign that your job will end whether you choose to quit not. If you actively take the steps to set yourself up for a new employment opportunity, this transition will be easy. However, if you keep ignoring the signs, you may get laid off and have to deal with the stress of finding a new job last minute.

Either way, the outcome will lead you to a more positive outcome, but the means to get there will vary in stress.

What does it mean to have a white owl fly over you? If a white owl flies over you, it is a sign that the universe is looking out for you, and to not be worried about the next steps. Even if the path ahead looks frightening and unknown, everything will turn out for the best.

Meaning of Seeing a White Owl at Night

Owls are nocturnal creatures, so seeing an owl at night may seem like the most likely time to see them.

However, it is still very rare to see a white owl at night, so if you see one, it may be a spiritual message.

White owls are so special because they carry with them the light and high spiritual vibration of the color white, but because they are nocturnal and live during the night, they represent the dark shadow side of the physical world.

Seeing a white owl signifies that there are lessons you are working through that are part of your subconscious shadow self. You are being called to do deep shadow work in this season of your life.

What Does It Mean To Dream Of a White Owl?

Often times the spiritual significance of a white owl does not appear as a physical sighting of the bird; it comes in the form of a dream.

If you dream of seeing a white owl, it holds a similar significance of seeing it in the physical form. Generally, a white owl represents change, transformation, or things happening in ways you aren’t expecting.

For example, I know someone who was told she could not ever have children, so her and her husband lost hope of having their own child. At one point, she started having recurring dreams of a white owl and felt very mothering towards it. For some reason, she felt as though this owl was her daughter. Soon after she kept having this dream, she found out she was pregnant with a baby girl who was born healthy.

White owls are a way of saying expect the unexpected.

Spiritual beings often take the form of a white owl because this creature has such a high vibration that it is easier for them to take on this valence in the physical world, even in dreams. It is common for people to report that they felt they had been visited by a spirit guide after waking up from a dream.

They often impart wisdom and clarity in dreams, so it may be a good idea to record your dreams first thing after you wake up from a dream where a white owl has visited you.

Being visited by a white owl in a vision or in a lucid dream is often a visitation from a spirit guide or spiritual being. It may be a spiritual being that is connected to a physical body (such as a baby not yet born or a person who has passed) and is visiting you in the valence of a white owl.

Pay attention to what message you are being given, and what other signs appear with this vision. Spirit guides and messengers often visit for a reason, and it is often in response to a question or desire that you have asked from the universe.

Another reason you may be seeing a white owl in a vision is that your spirit animal is an owl, and it is directing you towards your highest purpose.

Is Seeing a White Owl a Bad Omen?

There are many people and traditions that believe that seeing a white owl is a bad omen, and that it is bad luck to see a white owl.

The  Native American tradition white owls are a symbol of death, spun into scary stories that would scare little children not to go outside at nighttime.

In Mexico and Mexican-American folklore, owls were called lechuza and were thought to be shape-shifting witches that prayed on the weak, such as children, drunkards, and the elderly.

So, do white owls represent death? Are they bad luck?

I do not believe that a white owl represents the literal act of dying; rather, it conveys the spiritual significance of what death represents. Seeing a white owl is not a bad omen; however, it does represent change, and for those who are resistant to change, it can be interpreted as a negative symbol.

For example, in the Tarot, the Death card shouldn’t be interpreted literally. The death card is actually a positive card, as it represents the end of something and the beginning of something else. In this way, the card represents change and evolution.

Similar to the Death card, a white owl represents the law of nature: everything that is born eventually dies and is reborn again in a different form. All experiences eventually pass away; it is the long term journey of the soul that remains important.

In summary, the symbol of a white owl can be best described by a quote from an anonymous source:

“The owl is nocturnal with keen senses of sight and sound. It sees through the shadows of the night and hears the sounds in the silence; the illusion of the darkness. This teaches us to see past our own illusions and trust our intuition and perceptive senses.”

White owls represent the fear that we have of seeing ourselves as we really are which leads us to turn away from our source of light and hide within our shadow form. However, a white owl is there to let us know that our light source is always there, guiding us to our own internal wisdom.

Like everything on this site and on the internet, use your intuition when deciding what symbolism works best with you. While this is one interpretation of the spiritual meaning of a white owl, everyone has their own intuitive language.

And with that, I’ll leave you with this uplifting story of Baltimore, the snowy white owl had adventures all along the East Coast into Canada and beyond.

Amazing information hope you enjoy ! Beautiful and they are like Watchers for ETs or us . No Clue which one !

1 thought on “My White Owl friend and the spiritual significance”