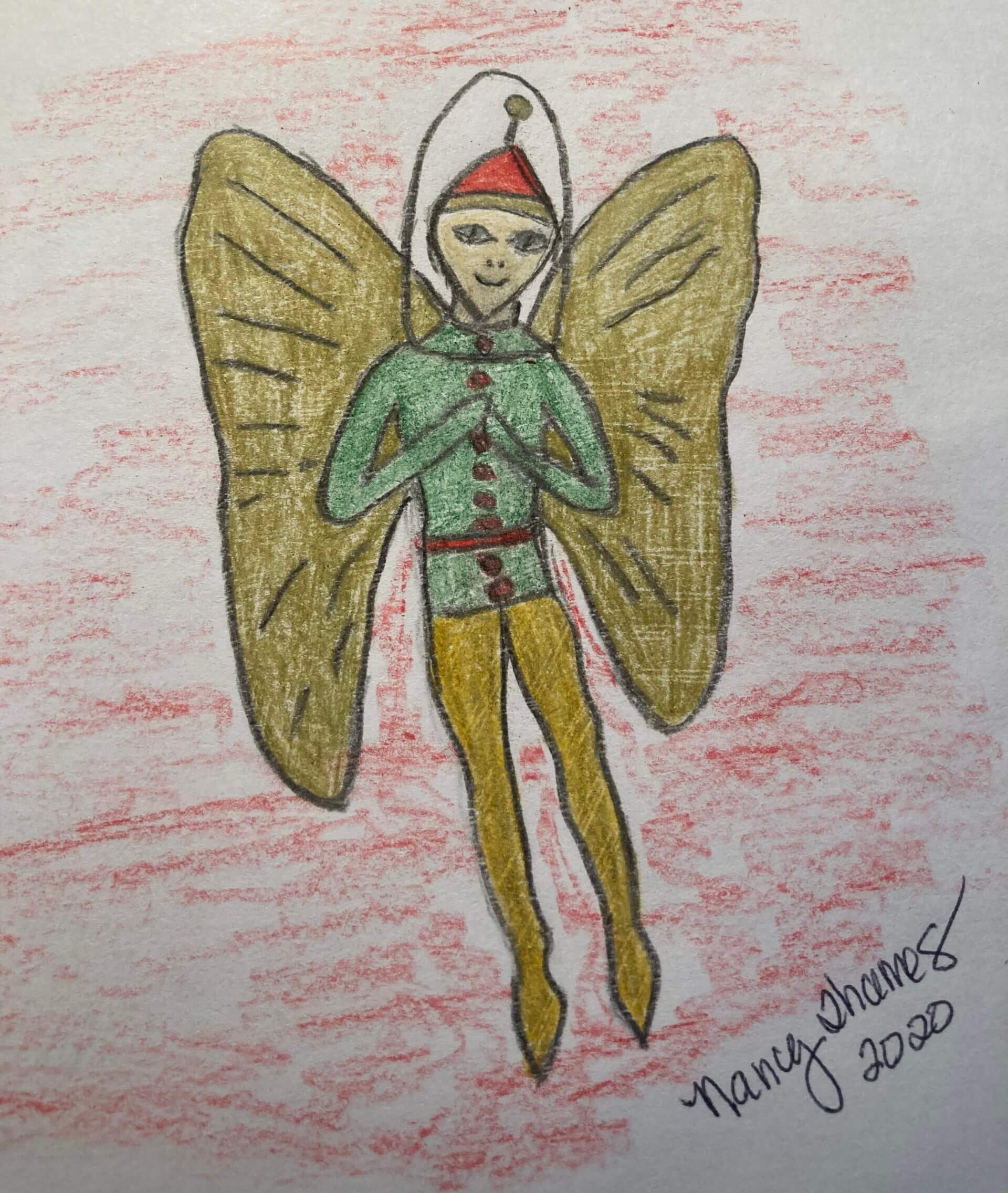 I always say, nothing gets me into the Christmas spirit like mince pie-eating Martians.

This time of year is all about cozy get-togethers with family and friends–not to mention the occasional gate-crashing space alien–and according to an Englishwoman named Jean Hingley, in 1979 some truly out-of-this-world guests treated her to a holiday season she’ll never forget. In an interview with Eileen Morris which appeared in the “Flying Saucer Review” (Nov./Dec. 1979) Hingley called the event “the strangest experience in my whole life.” If we are to take her account as the gospel truth, it would probably be more accurate to describe it as “the strangest experience in anyone’s life.”

Hingley and her husband Cyril lived in a small council house in Rowley Regis, near Birmingham. On the morning of January 4, Jean saw Cyril off to his job at a local cement works. After he left, she noticed a light in the back garden. Assuming that Cyril had left a light on in their car port, she went to check, but found the light was off. Mrs. Hingley then noticed an orange light hovering over the garden, which gradually turned white. She heard a sound that she described as “Zee…zee…zee…” Then “three beings” floated past her and went through the open back door of her house. The winged creatures glowed with a bright light and hovered about a foot above the ground. They were wearing silvery-green tunics and silver waistcoats, with transparent “fish-bowl” style helmets over their heads. They had no eyebrows or ears. Their faces were corpse-white with glittering black eyes.

Understandably, Mrs. Hingley was petrified with fear. So was her Alsatian dog, Hobo. He staggered about as if he had been drugged, and finally dropped to the floor, staring blankly into space. After a few minutes, her terror dissipated. “I felt as if I were lifted up…I felt as if I were a different person; as though I was in Heaven although I was still at home. I seemed to float into the lounge.” She saw that the uninvited visitors were attacking her little artificial Christmas tree, shaking and tugging at it like a trio of demented Santa’s elves. Once their examination of the tree was over, the beings floated around the room, touching everything inquisitively.

“Three of you and one of me,” Mrs. Hingley commented to them. “What are you going to do? What do you want with me?” In response, they put their hands to their chests, and appeared to manipulate some buttons. She heard a beeping noise coming from them, and then voices emerged, not from their mouths, but the chests. “We shall not harm you,” the voices said.

“Where have you come from?” Mrs. Hingley asked.

The trio went back to shaking the tree.

Mrs. Hingley, like any good hostess, engaged her visitors in some friendly small talk. She told them, “We put up a tree at Christmas because we believe Jesus was born then.”

“We know all about Jesus,” they informed her. She then gestured to a newspaper on her table, which showed the Honours list on the front page. “These people have been made lords,” she said helpfully.

“There is only one Lord,” the beings replied piously.

The creatures, like a bunch of bored children, then took to bouncing on her couch. “Be careful of my furniture!” Mrs. Hingley said reprovingly. They stopped.

Mrs. Hingley began to feel “happy” in their company. “They looked at me with friendly eyes.” She told the “gentlemen,” “Nice to see you!”

The beings went back to exploring the Hingley home. They floated around the rooms, and examined her bottles of whisky and sherry with particular interest. “Do you want a drink?” she asked. Thankfully, the creatures asked for water. (Tipsy flying extraterrestrials would have been just too weird.) Mrs. Hingley brought out glasses of water on a metal tray. As she came near her guests, the tray seemed to be drawn to the creatures, as if they were magnetized. As the creatures lifted the glasses, a blinding “power light” came on around their heads. “I didn’t actually see them drink but when they put the glasses back on the tray the water was gone.”

She asked them if she should tell people about them. “Yes,” they replied. They added “We have been here before. We shall come again. Everybody will go to Heaven. There are beautiful colours there.” The beings said they had already visited Australia, New Zealand, and America. “We come down here to try to talk to people but they don’t seem to be interested.” Hingley wondered why they had bothered to visit an ordinary woman like her, rather than, say, the Queen. “You are a lady,” they reassured her.

The four exchanged some casual chit-chat about politics, religion, and the role of women in the workplace. Frankly, it all sounded like the usual banal chatter you hear among bored people at a cocktail party. One would expect more from winged creatures from another world, but I suppose some things are universal.

Mrs. Bingley went to the kitchen and brought out a tray of mince pies. “They each lifted a mince pie from the plate as though their hands were magnetic.” Unfortunately, when she lit a cigarette, the sight of it so startled her guests that they leaped back and floated to the back door, still carrying their pies. As she followed them apologetically, she saw there was “an orange coloured glowing thing” in her back yard that appeared to be a space ship. It was eight to ten feet long and four feet high, with several round portholes. The ship had something like a “scorpion tail” at the back, and a wheel on top.”

The creatures floated into the ship, flashed its lights twice (“as if to say ‘Goodbye,'”) and disappeared into the sky. Mrs. Bingley’s dog, who had remained in a stupor during this entire visitation, suddenly came back to life and began wandering through the back yard, as if he was looking for the creatures. She noticed that the space ship had left a deep impression on the ground.

Her visitors left Mrs. Bingley feeling “warm and happy,” as though she had been “blessed.” When she told a neighbor what had happened, they advised her to call the police. She did so, which must have made for quite an interesting addition to the station’s police blotter. She also phoned her husband to tell him about her lively morning. “I have had visitors with wings,” she told him.

“Why don’t you go and have your hair done and tell the girls about it.”

It must have taken a lot to rattle the nerves of Cyril Hingley.

When policemen arrived, they were at a loss to know what they were supposed to do. They couldn’t take fingerprints. It could be assumed that the beings came from an area outside the jurisdiction of the West Bromwich Police Station. And just try serving these guys with an arrest warrant. However, the police did take measurements of the impression left by the space ship (it was 8′ by 4’) and took soil samples for analysis. (At the time Mrs. Hingley gave her interview, she had not heard the results of these tests.)

Mrs. Hingley said that her eyes were sore for a week after the “close encounter,” and she felt too unwell to work for some time. Cassette tapes handled by the aliens were ruined, and for a time her radio and TV ceased to work.

Mrs. Hingley told Morris, “Some people have made jokes about me, but people who know me believe me as they know I am truthful.

“Some people have written to say that they think the visitors were elves or beings from the Fairy Kingdom, or even robots, but I don’t know what to think. I know I shall never forget them if I live to be a hundred.”

And there ends the tale of what has become known in Ufology as “The Case of the Mince Pie Martians.” Jean Hingley was apparently a sane human being, who was utterly sincere in what she was saying. In other words, she was neither a madwoman or a practical joker.

I suppose we have no choice but to leave it at that.

[Note: According to some accounts of this case, there was a brief sequel. Two days after the beings called on Mrs. Hingley, the Christmas tree that had so fascinated them mysteriously vanished. It later appeared on her front lawn, ripped to shreds and missing the ornaments.

This suggests that if we want contact with alien civilizations, we should forget such technical things as space probes or monitoring electromagnetic radiation and just stick to buying a lot of holiday tat.]