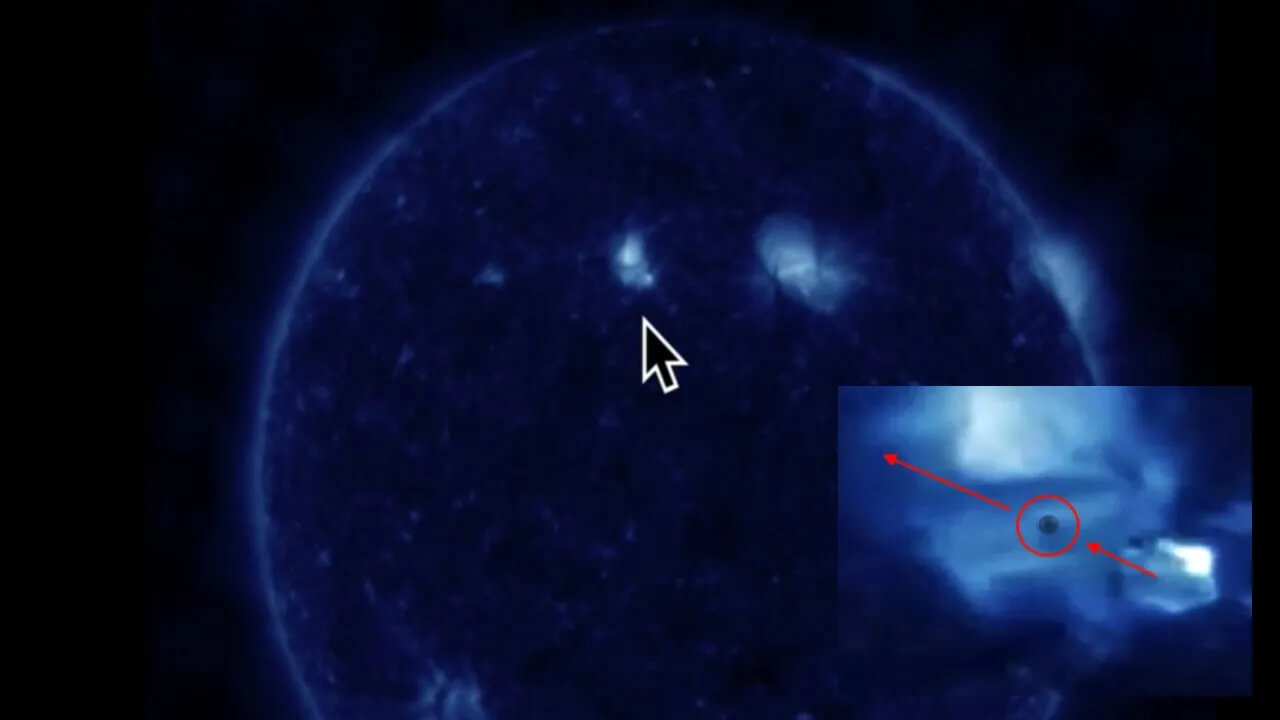 After the appearance of a Hollow Earth Theory, many conspiracy theorists started targeting Sun thinking that it might also be hollow. Many independent researchers including renowned scientists believe that our Sun is an intergalactic portal through which otherworldly beings travel to the solar system. Recently, one interesting video has hit the Internet and shocked space enthusiasts showing a “Moon-sized” undefined object spotted near the sun. After this incredible video, Hollow Sun has become the hot topic to discuss among UFO enthusiasts.

According to a famous UFO researcher and alien life enthusiast named Scott Waring, the video was captured on March 27, 2021, by a European solar observation satellite (ESA). While watching the video, there is a small burst of solar radiation which seems to be totally fine. But on zooming up, a black object could be seen, ejecting out of the sun during an explosion. It looks like an interdimensional portal opened up, through which a spaceship passed.

Waring noticed this anomaly while examining the solar flare video on the Helioviewer website. He strongly believes that it was not just an ordinary explosion on the surface of the sun but a real UFO that was spotted near it.

He wrote in his blog:

“I was watching Helioviewer when I noticed an explosion. When I made a close up of this area, I saw a black object shoot out of the explosion and across an area in ten minutes. Although the video is fast, the time it too is long. Also in the explosion, there was three ripple waves opposite of the UFO…the UFO area was the only place without such waves.”

Waring claimed this is “100 percent” proof that aliens live inside our sun. Back in 2009, he created the Hollow Sun Theory when he noticed UFOs going inside and outside of the sun in NASA’s photographs captured using Solar and Heliospheric Observatory (SOHO). He wrote that this theory is based upon the alien encounters that happened in Rocca Pia, Italy, and lasted for three decades.

“I learned all this was 100% possible from the evidence I gathered researching the Rocca Pia, Italy Friendship case. You see, the aliens told witnesses that the base below Rocca Pia was 300x300km long and 150km high. So huge it sometimes rained inside. So creating a base or closing it up was a simple task for them. Just something to think about next time a UFO is reported near our sun in NASA/SOHO photos or when dark spots (exits) are reported in the news,” Waring wrote.

Astrophysicist Jeffrey Wolynski put forward the Hollow Sun Theory, suggesting that “the sun contains no inner core and will shrink, cool and collapse upon itself. Wolynski argues that the sun is much younger than the earth and therefore possesses no core. It will gravitationally collapse until a certain point when it will stabilize into a solid ball.”

There are many instances shared by Waring to support his Hollow Sun Theory. In 2016, an unusual picture of the Sun captured by SOHO was published online, in which a bright white shaft was noticed on the sun’s surface by alien hunter TheWatcher252. Waring became interested in it and suggested that a giant door opened in the sun, allowing UFOs to enter and “crack shined pure white light of the world inside.”

Waring is not the only person who believes that an alien civilization has been using our Sun as a portal for traveling between different worlds. Nassim Haramein, a Swiss scientist and founder of Resonance Science Foundation also put forward a theory that aliens use the Sun as a portal, traveling to different places in the Universe.

According to Haramein, our Sun is a kind of stargate used by alien spaceships for interdimensional travel, and the black spots on its surface are actually small black holes. In his opinion, under some circumstances, these holes turn into wormholes and provide a good opportunity for space travelers for intergalactic travel.

“I believe these objects may be intergalactic ships from advanced civilization they appear to be under intelligent control they don’t appear to act in a natural way that you would expect from you know cosmological objects like comets and meteorites and so on could this explain the Suns odd behavior our changes in its sunspot and Solar Flare activity being caused by alien ships the solar flare appears to emanate right after the objects impact the Sun to me clear that the two are absolutely related and the Sun flare is most likely the shock wave resulting from the penetration of the objects through
the surface of the Sun alien spacecraft deliberately crashing into the Sun it’s an incredible theory but why would they do it according to NASA the answer lies in the astronomical records of the ancient Egyptians,” Haramein said in one of his interviews.

Another interesting theory suggested by Haramein is that any advanced civilization has attained the technology that could harness the power of black holes. According to him, once the black hole is stable enough, it can be used as an interstellar portal. The Earth also has a small black hole in its center and that is why, UFOs have been captured on our planet flying inside the volcanoes which are gateways to visit the Earth’s core. It should be noted that many ancient civilizations worshiped the Sun and had been in contact with the Sun gods.