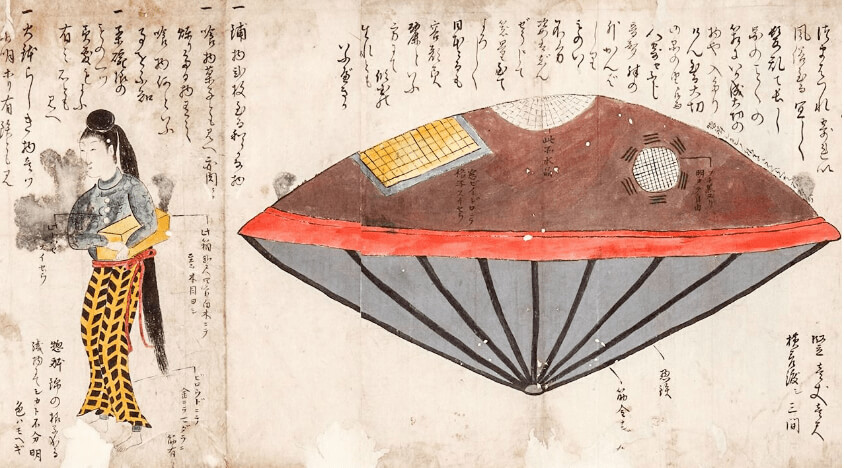 The whole world is full of mysterious and unknown things that have amazed researchers for a long time. Japan is the country of one of the oldest cultures that have kept the greatest secrets of previous civilizations. The island country has legends about the underwater ship (USOs) which often relates to Masuda-no-Iwafune, an 800-ton monolith at Asuka Park.

The story begins in 1803, during the Edo period when Japanese fishermen dragged an Underwater Submerged Object off the shore of the eastern coast of the Hitachi province. According to legends, the fishermen had encountered an Utsuro-Bune, a decorated hollow-ship, and an alive foreign lady inside it. The ship was said to be six meters wide and almost four meters high, and the inside walls had symbols similar to ancient Egyptian hieroglyphs.

The lady inside the ship had pale skin and red hair. She spoke in an unknown language that fishermen could not understand and carried a box. The story about her and the ship has been mentioned in three different manuscripts: Toen shōsetsu (1825), Hyōryū kishū (1835) and Ume-no-chiri (1844).

Firstly, there was a hypothesis that it was an edited story about the wreck of a Russian whaling ship but in the official documents, there is no description of cases of wrecks. According to professor Kazuo Tanaka, he came across to Utsuro-Bune after learning American UFO stories and Japanese legends where he saw flying saucer images in the text of the Edo period.

At first, Tanaka thought it was an edited story about the wreck of a Russian whaling ship, but he could not find any reference in the official documents to support his theory. As he started digging, he found more information and materials about Utsuro-Bune. According to him, he found 11 such documents that tell the tale of Utsuro-Bune from the Hitachi province. Out of them, two described the legends that allegedly that took place in 1803: Mito bunsho and Banke bunsho.

From “Mito bunsho,” Tanaka found an illustration of a woman who was in similar clothing to that of a Buddhist statue of Shofukuji at the Shōfukuji temple in Kamisu. The document credits a legend about Princess Konjiki (Golden Princess), who came from India to Hitachi province in a cocoon-shaped boat via sea. The locals helped to gain her health back and she repaid them by teaching sericulture.

While another document Banke bunsh tells that the exact location of the ship where it had arrived. According to a map produced by famous cartographer Inō Tadataka, it came ashore of Hitachihara Sharihama, now Hasaki Shirahama in Kamisu.

A former employee at British Government’s Ministry of Defense and UFO researcher Nick Pope said: “This craft was likened to the shape of a Japanese incense burner. It is almost literally a flying disk, a flying saucer. On the outside of this craft were multiple small metal plates, not too dissimilar to heat-resistant tiles that you’d find, say, on a space shuttle.”

According to some sources, an 800-ton monolithic, carved from a single piece of granite, known as Masuda-no-iwafune at Asuka Park in Japan resembles the description of the Utsuro-Bune. It has a length of 36 feet, width 26 feet, and 15 feet tall. The rock also has two three-foot square holes.

Dr. John Syrigos writes that the monolith could be caved in “commemoration of the building of Masuda Lake, which was once located nearby (now drained and part of Kashiwara City).” Other theories suggested that it was the astronomical observatory in ancient times or a tomb of the royal family.

Basically, Masuda is the name of a region and iwafune means “rock ship.” Some believe that the rock ship arrived straight from the heavens to the Earth. Ancient astronaut theorist Giorgio A. Tsoukalos believed that the Asuka Park monolith could be a sky boat, represented in Japanese mythology. He said: “I guess with the combination of those mythologies of celestial beings, this could be some type of representation of one of those flying vehicles that our ancestors perhaps witnessed.”