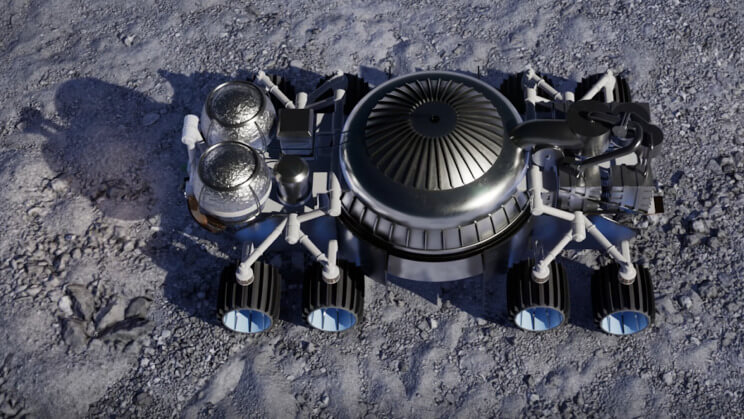 Lunar ice can be used for drinking water, rocket fuel, and other vital resources in missions to the Moon and beyond.

An illustration of the Rocket M system Masten Space Systems

Mojave, California-based Masten Space Systems is developing a robotic rover system to mine ice on the Moon using controlled rocket blasts, a press statement from the company explains.

The rover, called Rocket M, will extract lunar ice, which will be “critical to maintain a sustained presence on the Moon and allow future missions to Mars and beyond,” Masten Space Systems said in its release.

Lunar ice can be used for drinking water, rocket fuel, and other vital resources in NASA’s future Artemis missions, which aims to take humans back to the Moon by 2024.

The Rocket M was Masten Space System’s entry for NASA’s Break the Ice challenge, which called for innovative designs for excavating lunar resources in order to reduce the, otherwise prohibitively expensive, reliance on sending supplies from Earth.

NASA’s Break the Ice challenge called for entrants to design a rover that can land on the Aitken Basin at the lunar south pole — which is believed to hold approximately 154 million pounds (70 million kg) of ice — and mine for resources at the location.

Masten’s Rocket M rover uses controlled rocket blasts to break up the soil or regolith underneath the rover, where it then extracts the ice. The company, which has also built a lunar lander, says the rover “is projected to mine up to 12 craters per day and produce 100 kg of ice per crater.”

The rover, which weighs 2,465 pounds (1,118 kg), will land on the Moon thanks to a lander that doubles up as a support station. Once at the required location, it uses a 100 lbf rocket placed under a pressurized dome, allowing it to mine 2 meters below the lunar surface.

During the mining process, “ejecta from multiple rocket firings blasts up into the dome and gets funneled through a vacuum-like system that separates ice particles from the remaining dust and transports it into storage containers,” Masten Space Systems says.

The solar-powered rover is capable of traveling at speeds of up to 2.14 mph (3.45 km/h), and it can also climb 20 percent inclines, which means it can potentially be valuable for future Mars missions.

The company’s statement also says that “stored water can be electrolyzed into oxygen and hydrogen utilizing solar energy to continue powering the rocket engine for more than 5 years of water excavation.”

Masten’s new system was designed as part of a collaboration between Honeybee Robotics and Lunar Outpost.

In March this year, a pair of mechanical engineering students at Washington State University received a $125,000 grant from NASA to build a prototype for a “borebot” drilling system that uses robots to reach water under Mars’ polar ice.

Such systems will, in theory, allow future space outposts to operate year-round, enabling continued exploration and new discoveries about the cosmos. Watch a video detailing the Rocket M system below.