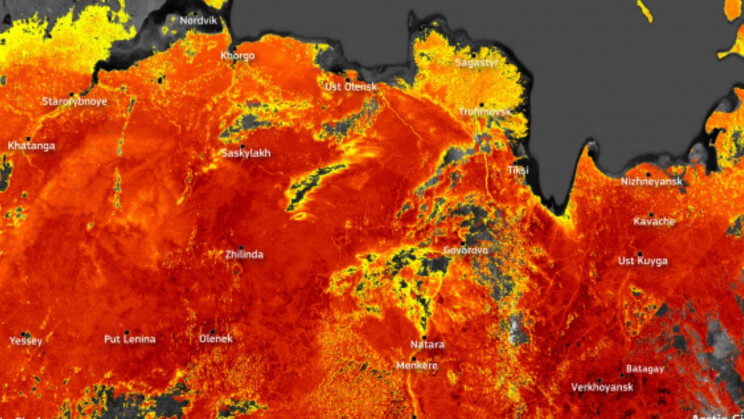 No, it’s not just your town, the Arctic is warming up twice as fast as the rest of the world.

If you have been thinking that this year’s summer is quite bad, spare a thought for the poor souls in the Arctic. Surface temperatures near Verkhojansk peaked at 118 degrees Fahrenheit (48 degrees Celsius) on June 20. The Arctic circle is known for its snow caps and sub-zero temperatures.

The temperatures were recorded by the Copernicus Sentinel 3A and 3B satellites. The Copernicus program is run by the European Space Agency and monitoring land, ocean, and atmospheric conditions using radar and multi-spectral imaging. Each Sentinel mission consists of two constellation satellites to ensure coverage and robustness of data.

The Directorate General of Defense Industry and Space also tweeted about the air temperatures in the town of Saskylah which reached 90 degrees Fahrenheit (32 degrees Celsius), the highest in records maintained since 1936.

It is important to note that the temperature recorded near Verkhojansk was land temperature. The air temperature was 86 degrees Fahrenheit (30 degrees Celsius). For the Arctic Circle, 30 degrees is also very hot.

This is not a one-off event. Temperatures in the Arctic have been rising for the past few years. In July of 2019, the Arctic saw some unconventionally high temperatures.

Wildfires have become an annual occurrence since 2019.

Carbon dioxide levels in the atmosphere are at record highs. While the whole world is facing rising temperatures, the Arctic is warming at twice the global average, according to the World Meteorological Organization.

The higher temperatures melt the permafrost releasing carbon dioxide trapped for thousands of years. The released gas traps more heat in the Earth’s atmosphere leading to the melting of glaciers, the lesser reflection of sunlight, and further increase of temperatures. The cycle continues year after year.

Needless to say, the time to act on climate change is now.