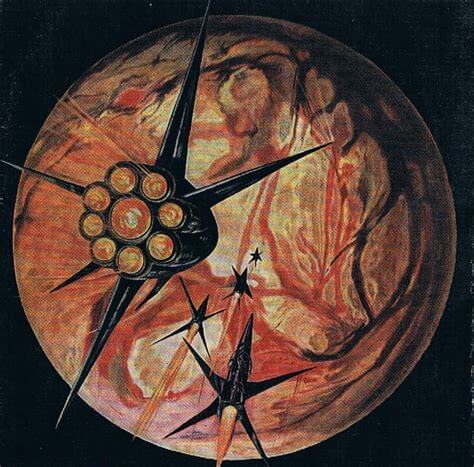 Martians were outnumbered and outgunned and lacked the technological wherewithal for survival during the volatile period. Martian wars against the Serpents lasted countless eons and sputtered out ages ago. Martian refugees were exiled to Earth by the Serpents, with the most recent batch, prior to the human Renaissance era, on Earth.
Martians were a much more powerful race in the past, and they were able to hold their own against the Serpents, and other races, for millions of years before their eventual downfall. Mars retains a significant and diverse population to this day. However, it is wildly scattered throughout the star system.
Hidden on the surface and deep within Mar’s innards, are the remnants of a once-dominant Martian civilization. Martians continue to occupy near and distant orbits around Mars, on spacefaring vessels (for a quick getaway). Martians remain subservient to various Reptilian races, which includes the Serpents. Serpents control Martian movements and habitation in the star system, as they do for humans, as well.
Present-day humans are unaware or vaguely aware of Martian life, and the extent of life throughout the star system (which most humans are in denial of). Populations of various creatures and beings on planets, moons, and the billions of space cities (ships), although decreased significantly from past millennia, remains robust in this system. As is true with infants who are unaware of the hustle and bustle and goings-on in the world around them, humans on Earth, are unaware of the goings-on in the star system all around them.

Before the downfall of Mars, Martians battled Serpents relentlessly for control over planet Man and its four moons. Over the centuries, Mars made significant inroads into Man, spreading their own breeds secretly on that doomed planetary system. Martians were able to remain hidden from the humans on Man and avoided detection by the Serpents (so they believed). Serpents were always aware of Martian intentions for planet Man, and the Martian penetration of that planet.
Planet Man was dominated by a pure breed and a solitary race of humans. Humans remained mostly untainted for the greater part of Man’s multimillion-year existence. But fringe beings including Martians managed to hide within planet Man and its four moons. Mysteriously, Serpents, and the gods permitted the worms in the apple of Man.
Nevertheless, Serpents had no intention of allowing the Martians to gain a permanent hold on planet Man. But knowing that the planet was destined for destruction, the Serpents bided their time, and patience, with the Martians, and other infestations on Man.
Planet Man had the largest human population in the star system. One that was spread out on other planets, moons, and the thousands of space cities that were incorporated inside of massive starships.
Man’s extensive network of outposts connected every segment of the star system together like that of a spider’s web. Humans from Man collaborated with various other entities and races throughout the star system, providing services and trading goods with all the planets and moons in the system.
Humans, above all the other beings in the star system, were trusted (and manipulated) by all. Nevertheless, the humans were protected, for the most part, by the gods. That protection came to an end after millions of years, when the gods forsook the humans of Man, for a greater interstellar purpose (demands from higher beings that were above the gods and residing in the cosmic realms).
Serpents were chosen by the gods to pull the plug on the pure-bred humans on Man, its moons, and the whole of the human network across the star system. One of the reasons (but not the most important of reasons) that humans faced annihilation, along with their extensive network that connected all the beings, and the various races on planets and moons, had to do with a parasitic Reptilian strain of beings, which had leached on to the humans for their near-perfect genomic biological structure. It was an ironic paradox because the Reptilian race was permitted to do what they did by higher echelon galactic rulers, for millions of years.
Cleansing and keeping it untainted (the human genetic material), inherent in humans of Man, was past its prime, and no longer paramount to the Serpents, who had been instructed on the future plans for humans on Earth. In the aftermath of the reform in the star system, a pure breed of human was no longer the objective or desire of the overseers of that particular branch of humanity (the humans of Man).

2 thoughts on “MARS AND THE LOST PLANET MAN”