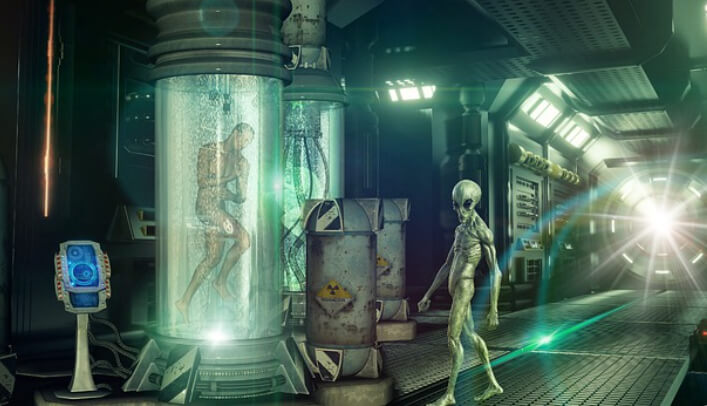 An interesting tale was published on October 13, 2021 on the forum abovetopsecret.com. The surprising part is that the tale was posted by a user with the nickname “MisterExpert” who claims to have fathered an alien child. The post caught a lot of attention and several people took interest in the case. The user began his story by skipping directly to the event that came out as most shocking to him.

“For starters, I’m going to ‘dive into the farthest end of the pool’, that is, I will skip the entire introduction about how they began to abduct me, and move on to the event that became the strangest for me.

The user claimed that when he was in his late teens, the abductions began and aliens took him to various places.

“They had just finished doing to me what they usually did when they picked me up and took me somewhere deep underground.“

The man claimed that he was in his senses and was able to walk on his own feet. Then the extraterrestrials took him to a room that seemed extremely strange and unfamiliar. Next what happened is quite interesting and surprising. The man was asked by an alien that “Would he perform one more favor for the aliens?”. To which the man responded that, “Of course, whatever you want, no problem.”

It is believed by this man that aliens possess the ability to manipulate with your mind, and they can make a person feel that the aliens hold only good intentions towards the humans. The ETs further told him that they want him to meet someone, and it would be of great help to the aliens if he agrees to greet that specific “someone”. The man agreed to it and inquired about the person whom he was supposed to meet next.

The Alien asserted that:

“This is the one who came from you. And let me tell you, he is really great, he is funny, smart and has a great character. He always asked if he could meet his human / earthly father and he didn’t quit. He was very, very persistent, so we finally promised him that we would ask you about it. The child is special, we all like him, so we want to reward him by meeting you. But just for a minute. Okay? “

The man agreed to meet the alien child whom he allegedly fathered. However, he was not allowed by the ETs to think clearly or react more emotionally to something that, in retrospect, and this gesture of the aliens was profoundly significant.

“Okay, great,” said the alien. “But listen, he will seem strange to you, he is not like you, he is a part of us, so be ready for this, and when you see him, no matter what you do – do not even think that he looks ugly. Compel yourself not to think that he looks ugly or weird, even if the sight of him shocks you a little. Don’t let yourself think about it, otherwise he will find out and it will really hurt his feelings, okay? We definitely don’t want that, so we usually don’t allow contacts like that. So just say hello and tell him you’re pleased to meet him. Okay? Here he is. “

Then from a dark bend, another alien appeared before the man. That alien was accompanied by a small short boy with a large head, large eyes (with large completely WHITE eyes) and with a small amount of fine hair on his head, a small lock of hair fell on his forehead.

The man further claims that his natural reaction upon seeing the boy was muted and he believes that the aliens helped him not to ponder over the appearance of the alien child.

In the man’s opinion, the alien child looked a bit like Charlie Brown (American comic book character). However, he was lovable, and he exuded happiness and nervousness, but mostly joyful excitement from meeting his father.

The man wanted to meet his alien son in a private space and wanted to express real human emotions. However he further asserted that the aliens do not allow humans to be rational and reasonable with them, otherwise you would resist their actions at every turn.

Last meeting with the Alien Child

The man told the alien child that he was glad to meet him and also that his boy is really beautiful. He also informed his child that the aliens think really high of him. The man ended his story by saying:

“I wasn’t sure what to say to him, I guess I just dealt with it as best I could in the mental state they kept me in.”

“Everything was going well. We stood and next to us were three short Grays, watching and listening to every word. Apparently, what I said was acceptable to them, but then I started asking the boy such questions as “What do you like to do for fun, what do you like?”, “Are you going to visit me and your mom?”

“After that, the Grays instantly dragged the child away and I was told, “Okay, we have a busy schedule, so we have to get you back, that was great.” And they took the child one way and me the other.”

“I remember this today, and it’s hard for me to come to terms with it. I am ready to discuss any aspect of my abduction experience. If you have any questions about aliens I’ve dealt with, I’ll answer if I know. Thank you for your time.”

This indeed sounds like an interesting tale. However the question is that could it be really possible for a human to father an alien child. Drop your views in the comment section to discuss with us.