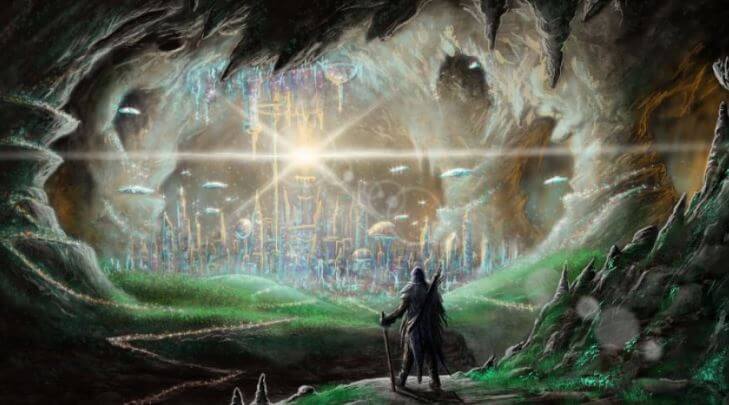 The notion that the Earth is hollow is well-known among paranormal and unexplained readers. The concept is rooted on old stories from many cultures, which claim that there are races of people – even entire civilizations – that live in underground cities.

These subterranean residents are frequently more technologically sophisticated than those of us on the surface. Some even believe that UFOs are created by weird entities in the Earth’s innards, rather than coming from distant worlds.

What weird races of beings are these? How did they end up living deep within the Earth? And where are their underground cities’ entrances?

The network. Agharta (or Agartha), with its capital city of Shamballa, is one of the most commonly used names for the civilization of underground dwellers. The Smoky God, a Norwegian sailor called Olaf Jansen’s “biography,” appears to be the source of this information.

According to Willis Emerson’s novel Agartha — Secrets of the Subterranean Cities, Jansen’s sloop passed through a passage to the Earth’s interior at the North Pole.

For two years, he lived with the people of the Agharta network of colonies, who were a full 12 feet tall and whose world was lighted by a “smoky” central sun, according to Emerson. One of the colonies, Shamballa the Lesser, also served as the network’s capital.

“While Shamballa the Lesser is an interior continent, its satellite colonies are tiny contained ecosystems hidden beneath the Earth’s crust or among the mountains.”

Why did they get there and how did they get there? According to Secrets, countless cataclysms and battles on the surface pushed these people underground: “Consider the long Atlantean-Lemurian war and the might of thermonuclear armament that ultimately sunk and killed these two highly sophisticated civilizations.”

The Sahara, the Gobi, the Australian Outback, and the United States’ deserts are only a few instances of the resulting destruction. The sub-cities were built as safe havens for people and holy documents, teachings, and technology that were prized by these ancient cultures.”

The entrance. The Kingdom of Agharta is said to have numerous gates across the world:

– Mount Shasta, California, United States — the Agharthean city of Telos is said to be located within and beneath this mountain.

– Mato Grosso, Brazil — this plain is said to be home to the city of Posid.

– Iguaçu Falls, on the border between Argentina and Brazil.

– Mongolia – the Shingwa subterranean metropolis is said to lie beneath Mongolia’s and China’s border.

– Rama, India – legend has it that underneath this surface city sits a long-lost underground metropolis named Rama.

– The North and South Poles are the most northerly and southerly points on the globe.

The people. Some people in India still believe in a subterranean race of snake people who live in the towns of Patala and Bhogavati. They battle the kingdom of Agharta, according to mythology.

“The Nagas are characterized as an extremely sophisticated race or species, with highly developed technology,” according to The Deep Dwellers. They also have a dislike for humans, who they are believed to kidnap, torment, interbreed with, and even eat.”

The entrances. While Bhogavati’s entrance is said to be in the Himalayas, devotees claim that Patala may be reached through the Well of Sheshna in Benares, India. In his book The Deep Dwellers, William Michael Mott says:

“This entryway is really genuine, according to herpetologist and author Sherman A. Minton, as reported in his book Venomous Reptiles, with forty stairs that drop into a circular pit and finish at a locked stone door decorated with bas-relief cobras.

“In Tibet, there is a huge mystical temple known as ‘Patala,’ which is supposed to sit atop an old cavern and tunnel system that stretches across the Asian continent and maybe beyond,’ according to locals. The Nagas have a strong love for water, and their underground mansions are frequently reported to be concealed at the bottom of wells, deep lakes, and rivers.”

The beings. Brad Steiger writes about the stories of “the Old Ones,” an ancient species who occupied the surface earth millions of years ago before moving underground in an essay for Atlantis Rising titled “The Hollow Earth: Myth or Reality.”

Steiger says, “The Old Ones, an enormously intelligent and scientifically sophisticated species, have decided to create their own habitat under the surface of the earth and produce all of their requirements.”

The beings. The so-called “Shaver Mystery” is one of the most contentious legends among inner Earth inhabitants. Amazing Stories magazine, edited by Ray Palmer, published a narrative by Richard Shaver in 1945, in which he claimed to have just been the guest of what remained of a subterranean society.

Despite the fact that few people accepted Shaver’s account and many people suspecting him of being insane, Shaver insisted that his narrative was factual. In our prehistoric past, he claimed, the Elder Race, or Titans, arrived to this planet from another solar system.

After a while on the surface, they discovered that our sun was prematurely aging them, so they went beneath and built massive subterranean structures to dwell in.

They eventually decided to go to a new planet, abandoning the Earth and leaving behind their underground cities, which were occupied by mutant beings: the wicked Dero – harmful robots – and the nice Tero – integrated robots. These were the creatures Shaver claimed to have encountered.

The entrance. Despite the Shaver Mystery’s great popularity in Amazing Stories (which Palmer milked for all it was worth), the location of the entrance to this beneath planet was never revealed.

Is it far-fetched? Absolutely. Entertaining? Yes, absolutely. Many people still think that these subterranean civilizations exist and that alien races still inhabit there. However, you’ll seldom hear about someone setting out on a quest to find these concealed openings and confront the denizens of the hollow Earth.