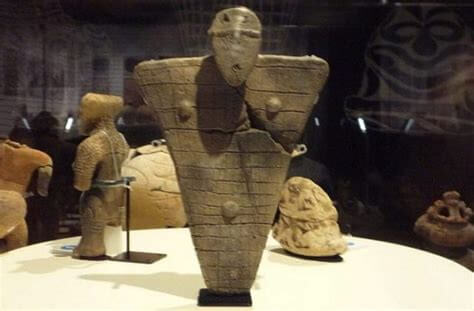 Тhe so-called Japanese clay figurines Dogu depict strange humanoid creatures in clothes that strongly resemble space suits. However, 10,000 years ago, the first inhabitants of the eastern islands already mastered the art of ceramics, cooked their food in pots, and lived in villages.

The bodies of the creatures depicted in those figurines are clearly not human, and their heads have a triangular shape that is uncharacteristic for earthlings.

Experts noted that the sleeves and legs of Dogu’s suits seemed to be inflated with air to equalize the pressure inside the suit with the outside. They also found not only a sealed helmet with slit goggles, various fasteners, small hatches for controlling and repairing life-support devices, but also such an element as a breathing filter.

In addition, specialists also found three mysterious round protrusions near mouths and cheeks of most of the figures, which are very difficult to correlate with any details of the face of a modern human. But if we compare it with an astronaut spacesuit, then breathing hoses and intercom cables can be connected to such sockets.

Dogu figurines belong to the Jomon culture and were made thousands of years ago, during the Jomon period of 14,000-400 BC. Due to their strange characteristics, they are one of the unique ancient art in the world. Besides, it is considered that the Jomon people were the first to attain mastery in pottery.

During different eras of the Jomon period, the appearance and style of these figurines changed several times. Archaeologists have found very few clay figurines from the beginning of this period.

One of the earliest Dogu, which were made around 10,000 BC, looked like abstract representations of a human figure and were very small in size. By 4000 BC, the Dogu had arms and legs, as well as a symbolic image on their heads. By 3000 BC, the figures already had detailed cut out faces.

These incredible and yet strange figures continue to amaze archaeologists and researchers to date. After thousands of years, it is still unknown what they were made for. One theory suggests that these are images of the gods, and the Jomon people prayed to them for food and health.

According to other theories, Dogu were simply toys for kids or funerary figurines. And, according to some archaeologists, these statuettes most likely testify to an early religious culture and shamanic rites. Most scholars speculate that the Dogu were talismans intended for good health or safe childbirth.

According to the National Museum of Japanese History, around 15000 to 18000 Dogu figurines were recovered by researchers throughout Japan. Most of them were found broken with missing arms, legs, or other body parts.

A specialist in the ancient culture of Japan Vaughn M Greene even wrote a book, “The Six Thousand-Year-Old Space Suit,” in which he focused on all the unusual details associated with those spacesuits and, at the same time, emphasized that in the Jomon era, the Japanese sculpted a lot of other clay figures with clearly human features.

In addition, in Japanese mythology, there are many stories about the flights of strange objects. So, was there a paleocontact with aliens in ancient Japan?

Ancient Astronaut theorists gave an interesting explanation of these humanoid figurines. They believe that the figurines represent the extraterrestrial beings that visited Earth in the distant past.

Dogu also have been part of many conventional theories. Even Erich von Däniken, the best-selling author, referred Dogu as “Japanese statue of Tokomai,” in the final chapter of his 1968 book “Chariots of the Gods.”