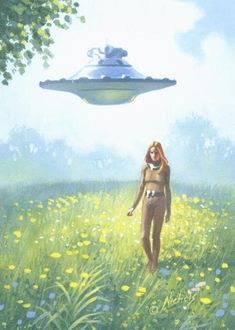 With The Pentagon just declassifying three short videos captured by Navy F/A-18 fighter pilots showing “unidentified aerial phenomena,” many countries are likely starting to think of official updated guidelines and protocols for handling a variety of possible close encounters with flying saucers from galaxies beyond.

Although the Japanese Defense Ministry admits that its pilots have never actually run up against any UFOs, they feel advanced preparation is prudent should that day ever come. These updated protocols are aimed at obtaining a heightened awareness of all types of next-generation military drones and experimental aircraft, as well as laying out strict procedures for identifying and dealing with spinning discs and streamlined saucers entering our atmosphere.

First contact with interplanetary or interdimensional aliens could take a variety of forms and might be mistaken for other weather-related anomalies or private aircraft of unknown origin. Current hypothetical situations being discussed include scenarios where a military pilot engaged in a training or surveillance mission crosses paths with a UFO or UFOs near or entering Japanese airspace.

Current rules require Air Self-Defense Force fighter jets to be scrambled from seven different air bases when potential UFOs are spotted. After identification and communication fails, the use of non-lethal signal flares or tracer rounds as warning shots fired in close proximity are authorized to suggest a forced landing should the aircraft exhibit hostile intentions or change course. However, the meaning of these actions might not be interpreted correctly by otherworldly travelers, hence the extreme need for new strategies as a precaution.

“If (UFOs) are encountered, training will be canceled immediately,” an unidentified source inside Japan’s Air Force told The Japan Times. “We will seek to identify it from a safe distance, including whether it is a drone, and report it to the Air Defense Direction Center for orders.”