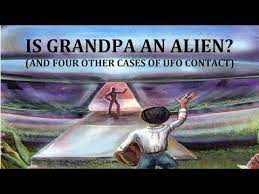 Preston Dennett
While UFO sightings are undeniably interesting, even more fascinating are accounts of actual contact. Missing time, face-to-face contact with ETs, onboard encounters — these kinds of cases provide deep insights into what it’s like to have an extraterrestrial experience. This video presents five extraordinary cases of UFO contact. Each case is different and shows just how truly strange, bizarre and enlightening it can be to have a close-up encounter with beings from other worlds. CASE ONE: I DID NOT EXIST FOR A DAY In the summer of 1973, a wall street executive flew by 747 from Hawaii to his home in New York City. During the flight, he was shocked to see a metallic saucer outside the window, pacing the jet. At first, he thought it was just a simple sighting. It wasn’t until he got home and received a huge shock that he realized his encounter was far more than just a sighting. CASE TWO: THE ABDUCTION OF TOM MURILLO One evening in 1976, New Mexico resident Tom Murillo took a drive to cool off after a family quarrel. Parking alongside a remote country road, he was approached by a strange tall figure. Moments later, he found himself being levitated inside a tube of light into a UFO craft. Inside, he was undressed, placed on a table and examined by gray ETs. But it’s what they did next that left him stunned. And after being placed back in his car, Tom realized that he had just undergone the most profound and unusual experience of his life. CASE THREE: MISSING TIME IN MOUNDHOUSE One night in April of 1996, Paul (pseudonym), was driving to his home in Dayton, Nevada. Just after passing through the small desert town of Moundhouse, he saw a brilliant light ahead of him. Very quickly the light grew in size and landed alongside the highway, revealing itself to be an enormous saucer-shaped craft. Two tiers of windows lined the circumference. Looking through the windows, Paul saw more than a dozen strange figures looking down at him. Some were grays, but some were much stranger beings. And then they began to communicate with him, initiating an encounter that would alter the path of his life forever. CASE FOUR: CONTACT IN TONOPAH On the evening of July 21, 2009, four friends (James, Henry, Heather and Jamie) decided to go UFO hunting in the deserts outside of Tonopah, Arizona. They had heard of recent sightings in the area and were hoping to have one themselves. Little did they realize that they were about to have a face-to-face encounter with extraterrestrials. Without warning, a gigantic triangular-shaped craft hovered overhead and then landed in front of them. A panel opened, and out stepped two strange humanoids, a short gray alien and an eight-foot-tall being. The two ETs began to communicate telepathically with the witnesses, giving them a dire warning to share with all humanity. James was able to videotape the entire encounter. After the craft departed however, the military showed up and surrounded their vehicle. Their lives, they knew, would never be the same. CASE FIVE: IS GRANDPA AN ALIEN? In 1955, five-year-old Marty Minetto was spending time with his grandparents in their home outside of Ault, Colorado. On April 9, Marty’s grandfather approached him and asked him if he’d like to go for a walk and have a great adventure. Marty agreed. The next morning, Marty and his grandfather left the farmhouse and walked out into the remote fields by their home. To Marty’s amazement, a large glowing egg-shaped craft dropped from the sky and landed in front of them. Moments later, a human-looking man stepped out and invited them both onboard. Marty’s grandfather explained that it was time for Marty to learn about who his grandfather really was. So began an incredible onboard encounter during which Marty was given a tour of the craft and learned many secrets about the people inside it. It was the first of several other encounters that finally answered some of the strange mysteries surrounding his unusual grandfather. These five true cases of UFO contact are just a few of the many accounts that are occurring all across our planet. We are not alone in this universe. We have never been alone.