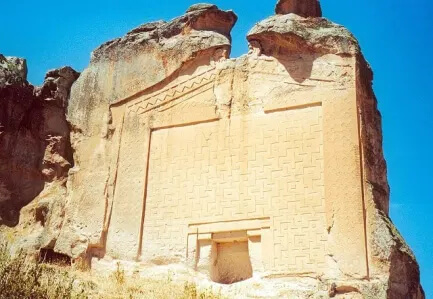 There is an extremely interesting stone carving in Peru near Lake Titicaca known as “Aramu Muru,” or “Gate of the Gods.” This abandoned Inca site is considered to be one of the most mystical and mysterious places in South America. There are many legends and beliefs around Aramu Muru. Some people call it a spiritual doorway that is located on a vast outcropping of the red sandstone. They perform rituals, meditate, and consider it to be a sacred place, while others believe that it is an alien construction.

It was in the 1990s when a mountaineering guide named Jose Luis Delgado Mamani came across this mystical site while exploring the Peruvian countryside. Aramu Muru is a 7-meter tall stone-cut alcove made by Incas. A trapezoidal depression is carved at the bottom in the center of the stone. Tourists that visit the place often say that while looking at it at some distance, the stone appears to be a portal whose construction was never finished.

American author George Hunt Williamson, who wrote several books on mysticism, wrote about a mysterious priest named Amaru Muru in his book “Secret of the Andes.” According to him, the priest was the keeper of ancient knowledge and the representative of the lost mystical continent “Mu.” He carried sacred texts of Lemuria and a “Golden Sun Disk” capable of healing people. Once, he was running away from the Spanish conquerors to hide the disk and successfully escaped them, vanishing through this gate in the Hayu Marca mountains. It is believed that he went into another world through this door and was never seen again.

The locals often speak about some “tall men accompanied by glowing balls of lights walking through the doorway.” Even paranormal writer Jerry Willis claimed that he had traveled through this gateway.

It should be noted that there is simply no information about the creator of Amaru Muru and its purpose. Nevertheless, there are a number of extremely interesting details that should be at least paid attention to.

Around 12,000 kilometers from Aramu Muru, there is a stone structure known as the “Midas Monument” in Eskişehir Province, Turkey, that shares the similarity with that stone gate. Author and adventurer Brien Foerster believed that both ancient structures could have been created by one person, as there is a possibility that he could travel for such a long distance.

Of course, the truth about this stone carving is still a mystery, and legends around it could be the result of George Hunt Williamson’s book “Secrets of the Andes.” The pilgrims who visit this place every day sincerely believe that the portal is the entrance to other worlds. They tell stories about the mysterious disappearances of either more fortunate or vice versa colleagues. Figures in long robes leaving and entering the portal, the glow emanating from it, and unusual visions and sensations come to people meditating here.

Is Amaru Muru really a portal to another world? Does the Turkish monument and Amaru Muru belong to the same creator? The answers to these questions are lost in history, but one thing is clear that the Gate of the Gods is one of the most mystical places in South America.