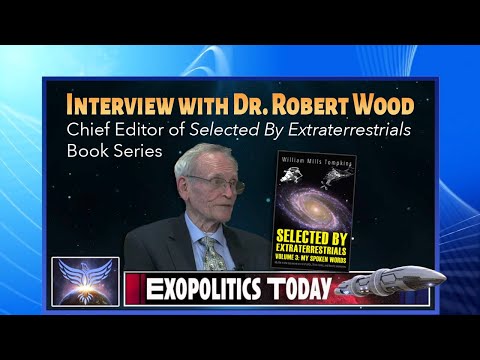 Michael Salla
Dr. Robert Wood worked as an aerospace engineer and physicist for 43 years during which time he specialized on missile technology for Douglas Aircraft Company and its successor McDonnell Douglas. During the mid-1960s, he received significant funding to research UFOs to see if their propulsion technologies could be understood and reverse engineered. After his 1993 retirement he began working on the leaked Majestic Documents and was able to verify the authenticity of many of these controversial documents which can be found at MajesticDocuments.com. Dr. Wood was the first UFO researcher to verify the authenticity of Bill Tompkins claims of having worked at a secret think tank, Advanced Design, hidden within Douglas Aircraft Company that designed kilometer(s) long space carriers for the US Navy, with the help of Nordic-looking extraterrestrials. In this interview discussing the release of the third volume of Selected by Extraterrestrials, Dr. Wood discusses his first hand knowledge of key corporate officials that Tompkins worked under, the feasibility of a secret think tank at Douglas, Tompkins work with the US Navy during WWII, the Nazi secret space program established in Antarctica, the Nazi connection with Reptilians, and other issues. Significantly, Dr. Wood asserted that the the Nordic extraterrestrials embedded at Douglas who Tompkins worked with, were members of the Galactic Federation of Worlds that several contactees have recently spoken about.