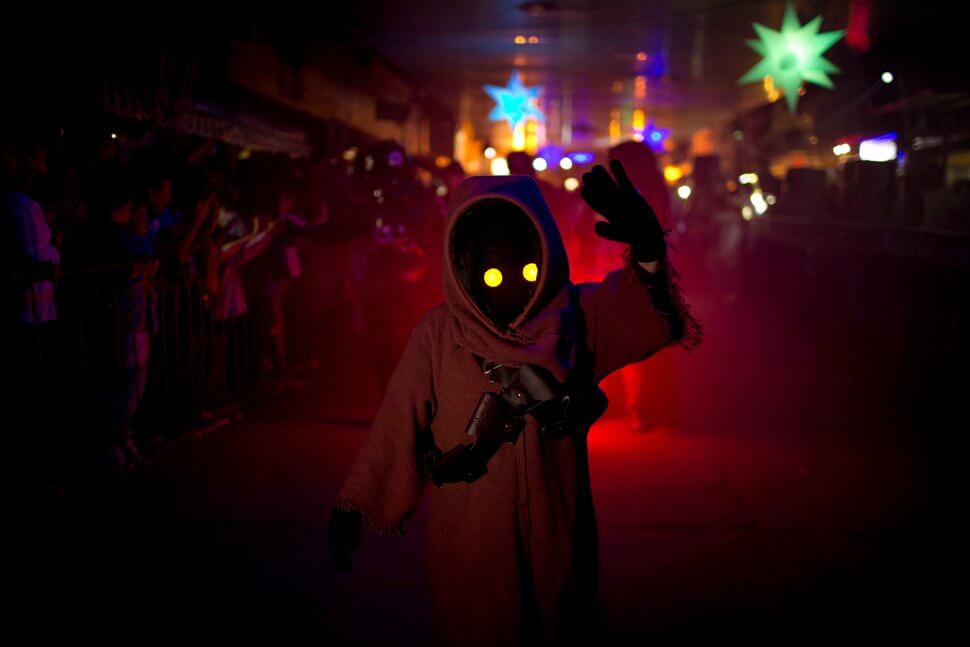 A youth sporting a Star Wars costume parades at the annual Alien Festival in Capilla del Monte, Cordoba, Argentina, on Feb. 14, 2016. Cordoba, the site of an alleged UFO sighting 30 years ago, has become a global hot spot for UFO sightings.(Natacha Pisarenko/AP)

The truth is out there.

So says an event description for a rally that was reportedly planned to be held outside the White House on July 2. The event – which was later reported as a bust by Nexstar Media Group – nevertheless was supposed to “protest the secrecy regarding extraterrestrial life.” Just a week prior, the Office of the Director of National Intelligence released an unclassified report about unidentified aerial phenomena, or UAP – the government’s official term for what is more commonly referred to as unidentified flying objects, or UFOs.

With countless documentaries, books, movies, TV shows and – more recently – legitimate reporting about UFOs, the possibility of extraterrestrial life has captured the imagination of Americans for decades, even if it has been stigmatized. In recent years, following the release of official military videos featuring strange objects in the sky, this obsession reached the mainstream and spurred Congress to order intelligence officials to report back on these sightings.

But experts say this hyper-interest in UFOs and what might be out there is not just an American phenomenon – that it is truly more global in nature. From Europe to China, from Russia to Australia, public interest in UFOs is very real, observers say.

Martijn Lampert had been waiting with anticipation for the release of the Pentagon report, even if he is very far away from the center of U.S. government. The research director and co-founder of Glocalities, a market research company based in Amsterdam, authored the “first-ever global study on alien life” years ago.

“Immediately, it made me think of the research we conducted earlier … because it is something that fascinates billions around the world,” Lampert tells U.S. News. “And I think that’s also quite logical that people are fascinated by the unknown, because curiosity is one of the highest values of humanity that propels us forward.”

While 143 of the 144 sightings studied by the government “remain unexplained,” according to the report released on June 25, they are still not classified as being out of this world. In fact, the report does not use the words “alien” or “extraterrestrial” once.

“So I don’t know what they are,” said Neil de Grasse Tyson, the renowned astrophysicist, during a Sunday television appearance on CNN’s “Fareed Zakaria GPS.” “If I were a betting person, I’d say maybe it’s a glitch in the software or the hardware. Any time you have some new, modern, fancy anything, there are glitches in it … So I’m just saying that – and it could be aliens. But that is insufficient evidence to convince me.”

Within the “other” category of possible explanations for the objects in the official report, the government authors are predictably even-keeled.

“Although most of the UAP described in our dataset probably remain unidentified due to limited data or challenges to collection processing or analysis, we may require additional scientific knowledge to successfully collect on, analyze and characterize some of them,” the report reads. “We would group such objects in this category pending scientific advances that allowed us to better understand them.”

While the report does not give many definitive answers, Lampert adds in an email that it is “very interesting to see that now an institution such as the Pentagon is even publishing about the UAP phenomenon and open to learning, investigating and sharing about these unexplained events.” He also notes that China and Russia – both of which are listed in the DNI report as possible sources of UAP – are two countries that the Glocalities survey found to be more likely to believe in intelligent alien civilizations than the U.S.

The survey, published in December 2017 and covered at the time by Reuters, reached more than 26,000 people from 24 countries and asked them about the possibility of the existence of alien life. Close to 50% of respondents – which Lampert described via email as “not a marginal minority” – said they believe in the existence of intelligent alien civilizations in the universe. A greater percentage – 61% – said they believe there is some form of life on other planets.

The differences between the countries show that Americans’ interest in UFOs is likely not insulated. Russia, Mexico and China – all reaching at least 60% – had the highest rates of belief in intelligent life on other planets. Thirteen countries, including Canada and Italy, had higher percentages than the U.S., which came in at 45%, according to Glocalities’ research. The Netherlands (28%), Indonesia (34%), Turkey (36%) and South Africa (36%) all had the lowest rates among countries surveyed.

The heightened interest in UFOs and the possibility of alien life is not just happening in the top countries listed in the Glocalities survey, experts say. Argentina – not included in the survey – has hosted a festival in recent years in its city of Capilla del Monte to honor a reported sighting there from 1986, according to The Associated Press.

“There’s certainly interest in Europe – in France, for example,” says Edward Guinan, a professor of astronomy and astrophysics at Villanova University. “France is really big into UFOs. I think it’s a universal thing.”

But Guinan also says that with America’s deep history – from the recently released military videos to the famed incident in Roswell, New Mexico, decades ago to innumerable other sightings – it’s “probably more U.S.” when it comes to the obsession. Roswell even plays host to a recently concluded annual festival to mark the 1947 event, inviting enthusiasts to “get abducted” in the “UFO capital of the world.”

One country that might appear lower on the list when it comes to UFO interest is Australia. The country – where 44% of respondents believe in alien civilizations, according to Glocalities – has had sightings reported in the past with similar circumstances, but the numbers do “not come anywhere close to what is reported in the U.S.,” says Rebecca Allen, project coordinator for the Space office at Australia’s Swinburne University of Technology.

“What motivates more Americans to claim UFO sightings could be as simple as the fact that the population is much larger coupled with a more active military,” says Allen, who is also the manager of Swinburne Astronomy productions, in an email. “It could also stem from the healthy (dose) of exposure to science fiction material that has been present in the media for decades.”

But Allen adds that the U.S. is not alone there. She notes that the roots of science fiction and the idea of advanced alien technology “long precede Roswell,” for instance.

“While the U.S. seems to have the loudest voice in the room, the science fiction genre portrayed by Hollywood has captured the imaginations of people worldwide,” Allen says. “There is certainly global interest in aliens and UFOs as evidenced by surges in Google searches following major news stories. As an astronomer, I guarantee you that no matter what country you are in, someone will always ask if aliens exist.”

One thing is clear: The interest in and more mainstream coverage around UFOs is likely not going anywhere, even after the inconclusive DNI report. Pentagon spokesman John Kirby announced recently that the Defense Department will continue the work of a task force created to support the UAP investigation.

“It’s really important to find out whether these phenomena occur elsewhere,” says Avi Loeb, the Frank B. Baird Jr. Professor of Science at Harvard University. “And that’s where the scientific investigation comes into play.”

Loeb adds that he believes many scientists “just ridicule the subject” when it comes to UFOs and extraterrestrial life, which he does not think is the “right approach.” Allen, however, says “we need to take a step back and be critical about what (these sightings) are.”

“If astronomers and engineers truly believe they have discovered a sign of alien life, intelligent or basic, trust me it will not be kept hidden but will be celebrated as the significant achievement it is,” she adds. “Again, on some fundamental level we all share a common interest in knowing if there is other life out there, but we cannot let that fascination convince us of evidence that is not there just because we want to believe it bad enough.”