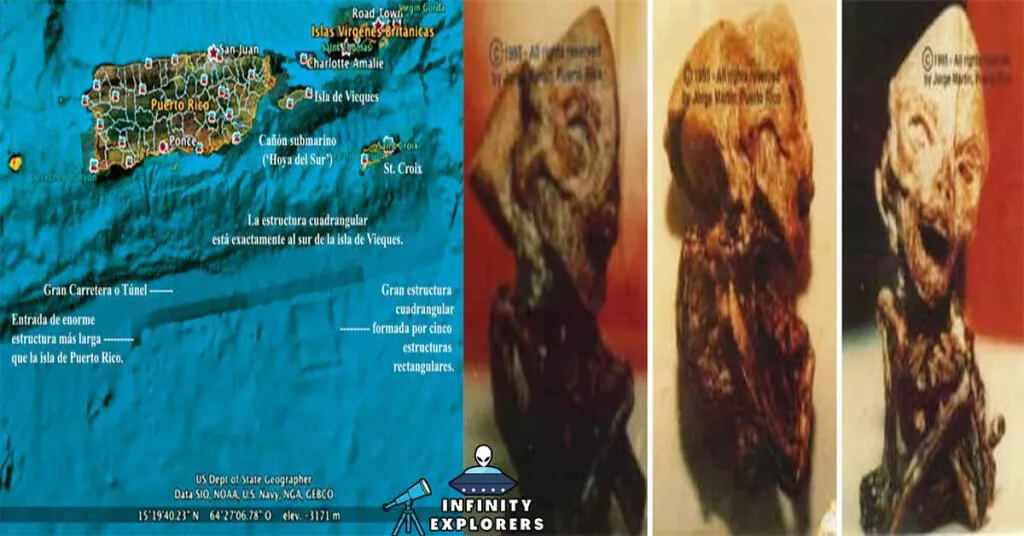 Jorge Martin( Ufologist who studied alien encounters in Puerto Rico) is one of the few professional ufologists who spent their entire life studying the mysteries of UFOs and have thoroughly investigated certain cases.

He has researched the UFO phenomenon and extraterrestrial activity in Puerto Rico and the Caribbean for over 30 years. He is mostly known to foreigners for his investigations into UFO sightings in El Yunque Forest in the 1990s.

Martin was born in 1952 in New York to Puerto Rican parents, but his parents moved back to Puerto Rico when he was 5 years old. He has been an active UFO researcher since 1975.

In the 1980s, something very strange began to happen in Puerto Rico. Residents of the Ponce City area began to report a mysterious “underground vibration” as if someone was actively drilling underground. They also heard strange loud noises and buzzing sounds for several nights in a row

Concerned about this, people turned to local and state authorities with a request to investigate. But they received no answer. Then local residents held peaceful protests for several nights, but, unfortunately, the media practically did not pay attention to them. Subsequently, the strange noise gradually stopped and people calmed down.

However, for Jorge Martin, this case was the very case that made him plunge head over heels into UFO topics. He interviewed people, looked for similar cases in the past, and soon found out that there is a group of islands situated nearby to the place of incident where UFOs and various anomalies are constantly seen.

During his investigation, in 2012 Martin came across a photo and saw mysterious structures under the islands which, in his opinion, were artificially created objects.

These structures were located south of the city of Ponce, extending east of the island of Vieques in Puerto Rico. One of them was a very flat and straight line, the other resembled a square structure.

“What is this?” Martin asked, “Is this a secret US military base or an alien submarine base?”

Martin initially believed that a secret US military base was more likely. He believed that these structures are part of the US Navy station, which until recently occupied the Roosevelt Roads naval base in Ceiba, in the east of the island.

He put forward this theory when he noticed that a long, straight strip at one point connects to the continental shelf in two even parallel stripes, this is directly south of the city of Ponce. Martin called these stripes an underwater tunnel.

“At the official level, the US Navy claimed that they closed this base in 2000, but who could assure that they did not secretly build giant secret facilities and continue to hide in our territory in the deep sea?” – Martin said.

On the other hand, the enormous size of these structures and the great depth (according to Martin, there is a depth of several kilometers!), At which they are located, must be very difficult for the survival of people on these bases.

In addition, it would be extremely difficult, if not impossible, to build such a gigantic complex at such a depth, because this would require some particularly advanced technology that humans did not have at the moment.

Martin also found out that those structures are extremely old and could have originated around the time of the last Ice Age.

Martin further suggested that there might be a mysterious noise that the inhabitants of Ponce heard in 1980, due to the fact that someone (the United States or aliens) decided to use a tunnel to connect the ancient structures to the shelf. And that somewhere under Ponce there is probably another base to which this tunnel is connected.

According to the people interviewed, the noise they heard really felt like they were digging the earth somewhere very deep with the help of huge excavators or other machines.

During this investigation, Harhe Martin found photographs of UFOs, which supported the theory that an underground UFO base existed somewhere in the area of ​​Vieques Island. These images were taken back in 1996 by astronaut Story Musgrave’s camera from the space shuttle during NASA’s STS-80 mission.

After reviewing these pictures, Martin went to interview the residents of Vieques if they saw something strange here. And received many eyewitness stories with intriguing details regarding alien encounters in Puerto Rico

A fisherman named Carlos Ventura said he believed there was an unusual empty spot underwater in the deep underwater canyon south of Vieques. Another fisherman named Alicio Ayala also confirmed the same and stated that he personally saw UFOs in the area on several occasions.

“While it was submerged in the water, we could still see the glow of its light until it disappeared. I stayed to see if it came back, but that did not happen. It was south of Vieques, in the South Depth zone. looking towards the tip of the city of Maunabo, on the main island, where the Maunabo lighthouse is located, “Ayala said.

Many others said they saw exactly the same strange things there, as well as in the area near El Yunque, on the Big Island. In addition, many of the residents of Vieques, interviewed by Martin, said that they often saw mysterious creatures, similar to those very Gray aliens, emerge from the sea and return back under the water.

All this goes well with perhaps one of the strangest cases that Jorge Martin dealt with, and which happened even when he was just beginning to get involved in ufology.

The incident took place in the 1970s at the peak of Cerro Las Tetas in Puerto Rico. One night, the fisherman Jose Chino Zaya and his friend went fishing and suddenly stumbled upon several deep caves. They climbed inside a cave and were horrified to see a group of strange humanoid little creatures inside.

According to Zai, one of the small creatures suddenly grabbed him by the leg, after which the frightened fisherman grabbed a stick and hit the creature hard on the head. The humanoid immediately fell down dead, after which Zaya and a friend fled from the cave, taking with them the body of the dead alien.

At home, Zai put the creature in a jar and poured formaldehyde over it. A few days later, he felt obligated to report the incident to the local police headquarters in Las Ochenta, near Salinas.

Officer Osvaldo Santiago was involved in this case. He visited Xai and examined the strange unearthly creature. Zaya was very scared and asked the policeman to take the creature from him. He admitted that he was afraid that other creatures would come looking for their dead comrade.

Santiago could not hide the details of this case from his wife, who, in turn, told about the strange events to a famous local businessman, who wished to remain anonymous. So the whole district soon learned about this creature.

As for the jar with the remains of the alien, at some point, an unnamed businessman showed it to Professor Calixto Perez from the University of Puerto Rico and he examined the remains.

“In my opinion, this is something extraterrestrial. His skull is too large for the body, it is small and skinny, and his eyes are too big,” – said the professor.

Measurements have shown that the creature is just over 12 inches long. His body was extremely thin, and his skull was nearly shattered from a violent blow to the head.

Around the time when the creature was with the professor, Jorge Martin found out about it, took a photo of it, wrote down in detail everything he knew about the circumstances under which these remains appeared, and in 1996 an article with these photos appeared in Magazin 2000, later spreading around the world. However, at the moment there are only assumptions about where this body is now.

What do you guys think about these alien encounters in Puerto Rico? Leave us your comments below.