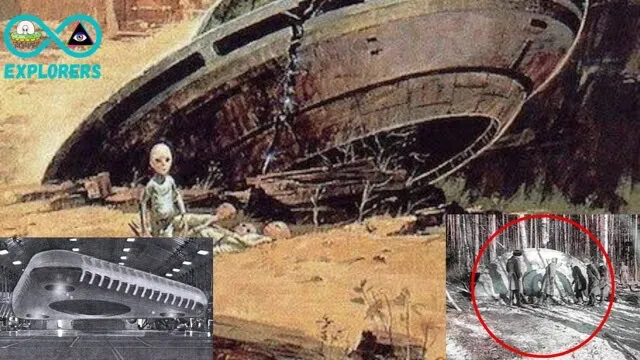 Many documents exist that contain information about UFO research which is conducted by staff of a special department within the KGB. One such document revealed that a UFO was shot down in 1979 by a secret agency of Soviet Union in the north of the Moscow region.

Since its founding on 13 March 1954 and remaining in operation until 3 December 1991, the KGB has served as the Soviet Union’s primary security agency. It served as the primary government agency for the “union-republican jurisdiction,” and was responsible for internal security, intelligence gathering, and secret police operations.

The agency was similar to a military service that operated under army laws and regulations, in the same way, that the Soviet Army or Internal Troops operated under Soviet laws and regulations. While the vast majority of the KGB archives remain classified, the “secret” mark was removed from some of the documents relating to numerous UFO events following the collapse of the Soviet Union.

The incident took place in 1979 in the northernmost suburbs of the immediate vicinity. On November 13, air defence systems near the city of Dubna were alerted to the presence of an unidentified flying object.

In order to prevent the disk-shaped contraption from getting closer to the capital, it was decided to shoot it down. Surprisingly, the plan was successful. The firing of an anti-aircraft missile for Moscow’s air defense system, the ZRV, was carried out by one of the components of the ZRV, which is a point of the Blue Ring air defense system.

The initial impact knocked the UFO out of the sky completely. A military brigade has been dispatched to the crash scene. The disk-shaped contraption turned out to have a diameter of about 6 meters when it was assembled. It was the shell that punctured the skin and caused catastrophic damage to the ship’s internal structure.

When the UFO was discovered, it was transferred to the laboratory of the research and production organization “Lightning,” where the renowned “Buran,” the first spaceplane to be manufactured as part of the Soviet/Russian Buran program, had previously been constructed.

A large portion of the object’s inside was severely damaged. Since the pilot has not been located, it is still unclear how the equipment is controlled. There were no distinguishing characteristics.
The putative analogue of the black box could not be declassified because of security concerns. It was extremely well safeguarded against any and all hacking efforts.

So far, there is no information on how to decrypt the file or how to extract the contents from it.
Upon further investigation, the scientists came to an astonishing conclusion: the device lacked both an engine and a fuel chamber.

Presumably, the object moved as a result of the energy released by two powerful magnets, which had been accumulated in an unknown mechanism, which is a closed metal flask in the shape of an infinity symbol, with heavy water contained within it.

In 1982, designers and engineers were able to establish a form of symbiosis between a fighter aircraft and a flying saucer as a result of the debris and apparatus that had been investigated. It was the first anti-gravity aircraft to be developed in the Soviet Union.

In addition, employees of the NPO Molniya attempted to restore the mechanism of the downed UFO, but for some reason, this was not possible due to technical difficulties.

The following items were then included in the newly developed “Guidelines for the Moscow Region on collecting information regarding anomalous occurrences, in particular, UFOs” in 1982:

In addition, a rapid response group was established at the UFO Study Department, which kept track of the vehicles’ landing sites and dispatched personnel to them as soon as they appeared. The information acquired by this department during the last decade of the Soviet Union included 28 landings in the Moscow region and three crash sites involving unidentified aircraft and vehicles.

The incident was first brought to public attention in the 1990s and early 2000s by several eyewitnesses, including Viktor Lastochkin, an officer who participated in the transportation and identification of the object, KGB captain Andrey Petrov, who was one of the authors of the “Methodological guidelines for the Moscow region on collecting information about anomalous phenomena, in particular UFOs,” and Major Artyom Valeryevich Bystrov.

Those kinds of stories don’t just happen by themselves. In the first place, the most recent inventions are so dissimilar from past ones that it appears almost as if these technology were brought to us by advanced civilizations from outside.

People used to have pagers, Tetris, and push-button mobile phones 20 years ago; now everyone has smartphones, iPads, Nintendos, and other technological marvels. The same is true for military technology, with the majority of the most up-to-date weapons being developed on the basis of information gathered in such scenarios.