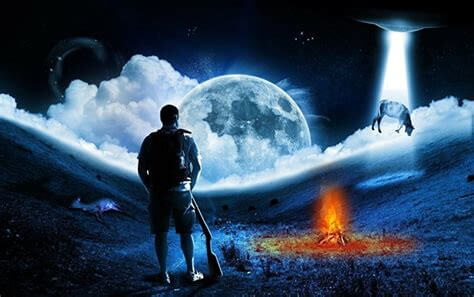 I’m as much a Sci-Fi fan as most anyone. I’ve read my fair share of Orson Scott Card books, seen all the Men in Black movies, think it’s a travesty that Firefly got canceled, and have sat through every cringy second of every lame attempt to improve on the original Star Wars trilogy, but until the past few months, I’d never seriously considered even the remotest possibility that humans may not be alone, at least on this planet and in this solar system.

But here we are, and if anything should unite humanity in an era seemingly as divided as ever, it’s the desire for an answer to this burning question: What in the world (or out of it) is going on with these UFO sightings? Yep, you read that right, UFOs. As in Unidentified Flying Objects, a topic, granted, typically reserved for the realm of kooks and pranksters. But what’s been going on as of late is something entirely different, and if you’ve not been paying attention yet, I strongly suggest you start.

Last May, Fox News host Tucker Carlson interviewed former military intelligence official Luis Elizondo, a man whose background – working for the Office of the Under Secretary of Defense for Intelligence and heading up the since-de funded Advanced Aerospace Threat Identification Program – puts him in a unique position to speak on the topic. Currently the Director of Global Security and Special Programs at the Stars Academy of Arts and Science and the host of the History Channel series “Unidentified: Inside America’s UFO Investigation,” the knowledgeable, well-spoken, decidedly non-kooky Elizondo lends an aura of serious credibility to a topic not often taken seriously enough.

Navy pilot Chad Underwood, another decidedly non-kooky individual, had remained mostly quiet about his own November 2004 UFO encounter until last year, mainly because he wanted to dodge being “attached to the ‘little green men’ crazies that are out there.”

“At no point did I want to speculate as to what I thought this thing was — or be associated with, you know, ‘alien beings’ and ‘alien aircraft’ and all that stuff,” Underwood told New York Magazine, explaining why it took him so long to speak out. “It is just what we call a UFO. I couldn’t identify it. It was flying. And it was an object. It’s as simple as that.”

The “UFO” Underwood and his commanding officer, David Fravor (if you have a couple of hours, his interview with Joe Rogan is absolutely fascinating), witnessed “represents one of three known instances in which Navy pilots caught an unknown aerial object (the Navy prefers that term over UFO) on camera,” Business Insider reported, the other two being in 2015.

“The thing that stood out to me the most was how erratic it was behaving,” he said, describing the “Tic-Tac”-like object they encountered while flying the Navy’s Super Hornet fighters on combat exercises. “Its changes in altitude, airspeed, and aspect were just unlike things that I’ve ever encountered before flying against other air targets.”

The unclassified DOD report surrounding the event stated that the object seemed to go from 60,000 feet to 50 feet over the water “within seconds,” had no heat or wings, and “possibly demonstrated the ability to ‘cloak’ or become invisible to the human eye” and could even have the capability to “operate undersea completely undetectable by our most advanced sensors.”

Speaking of Underwood’s encounter and the others as well as his own research and experience working for the government, Elizondo told Tucker that the question is no longer whether or not UFOs exist.

“Is it possible these things are a foreign adversarial technology that somehow was developed in secret and we are just now trying to figure these things out?” he said. “It’s possible. But, there are also other possibilities as well, of what these things could be.”

When pressed, Elizondo assigned a “low probability” to the adversarial technology theory: “Look, we have the most sophisticated weapon systems right now on the face of the planet, and we can identify not only a 737 or a MIG 25 or F-22, we can tell you even what airline it is and the difference between the models of aircraft within that type of aircraft. So, I think it’s highly unlikely that a foreign adversary was successful in developing something like this.”

While the government has allowed some information about these encounters, including some grainy videos, to be declassified or remain unclassified, recent news suggests there is still much that remains hidden. In fact, the Navy recently admitted to possessing top-secret information about UFOs that, if released to the public, could cause “exceptionally grave damage to the National Security of the United States.” And if that doesn’t raise enough eyebrows, this reportedly includes at least one unreleased video that has been classified as “SECRET.”

At the end of his Fox News interview, Carlson asked Elizondo if he believed that the “U.S. government has in its possession any material from one of these aircraft?”

“I do. Yes,” he responded. “Unfortunately, I really have to be careful of my NDA. I really can’t go into a lot more detail than that … But simply put, yes.”

Elizondo’s “five observable s” that differentiate UFO technology from known technology – instantaneous acceleration, hypersonic velocities, low observability, trans medium travel, and positive lift or anti-gravity – mean that, alien or not, we’re dealing with something that, if discovered, could potentially alter life as we know it in ways none of us can possibly imagine. All of which leads to, of course, far more questions than answers. But for the first time in any of our lives, the questions have reached a whole new level. No longer are we wondering whether or not UFOs with superior technology to anything we know exists, but rather, who – or what – is behind the wheel.