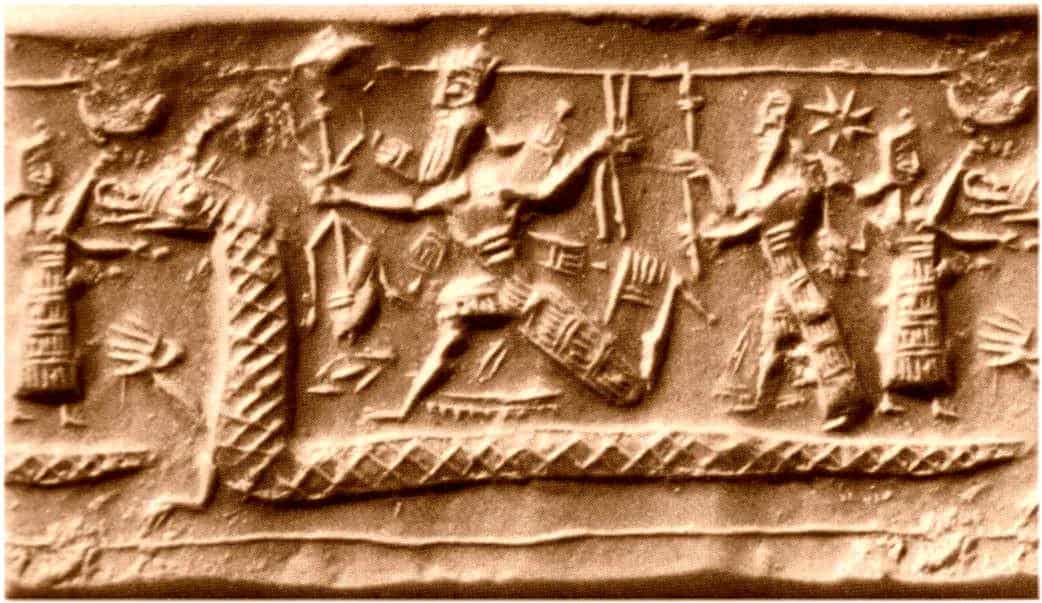 Ancient Sumer was the first urban civilization that inhabited Mesopotamia, now modern-day Iraq region, 6000 (or 7000) years ago (4500 BC). The Sumerians believed in many gods. They prayed to Anu (supreme god or sky god), Enki (god of water, knowledge, mischief, crafts, and creation), Enlil (Lord Wind), Inanna (Queen of Heaven), Utu (sun-god), and Sin (moon-god). Ancient Sumerian cuneiform tablets show that they knew about our Solar system a lot. They had knowledge of the shape of planets including Earth. It was Sumerians who invented the very first concepts of astrology, the 12 zodiac signs in 1894 BC. In many cases, the Maya civilization and ancient Sumerians shared the ancient heritage.

Many ancient texts reveal that humans and gods used to live together, while humans were servants to gods and each Sumerian city was guarded by its own god. The earliest record of a Sumerian creation myth can be found in a tablet excavated in Nippur, an ancient Sumerian city in Mesopotamia in 1893.

According to Sumerian tablets, The Enuma Elish (also known as The Seven Tablets of Creation) tells the story of the great god Marduk’s victory over the forces of chaos and his establishment of order at the creation of the world.

“When in the height heaven was not named,
And the earth beneath did not yet bear a name,
And the primeval Apsu, who begat them,
And chaos, Tiamut, the mother of them both
Their waters were mingled together,
And no field was formed, no marsh was to be seen;
When of the gods none had been called into being,
And none bore a name, and no destinies were ordained;
Then were created the gods in the midst of heaven,
Lahmu and Lahamu were called into being…”

Note: All the tablets containing the story of creation myth can be found at Ashur, Kish, Ashurbanipal’s library at Nineveh. Interestingly, imprints on the tables say that these are the copies of much older versions of the myth dating from long before the fall of Sumer in c. 1750 BCE.

According to the cuneiform tablets, Earth was ruled by human-like gods at the beginning. When they arrived on Earth, they made it habitable by toiling the soil and mining the minerals. Besides, the text mentioned the revolt between the gods and their laborers.

“When the gods like men
Bore the work and suffered the toll
The toil of the gods was great,
The work was heavy, the distress was.”

It is said before humans, Anunnaki (group of deities of the ancient Sumerians, Akkadians, Assyrians, and Babylonians) used the Igigi (sometimes also spelled “Igigu”), the young generation of Ancient Astronaut Gods as their servants to mine gold on Earth, but later they were replaced by humans when they rebelled against Annunaki. For the ancient Mesopotamians, heaven is divided into three domes. The lowest dome of heaven was the home of the stars and the middle dome was the home of the Igigi, the younger gods. The highest and outermost dome of heaven was personified as An, the god of the sky.

Besides, the Igigi are considered to be the mythological Sumerian deities by mainstream scholars. According to them, Igigi worked for the mighty Anunnaki as servants who initiated a rebellion against their masters and the dictatorship of Enlil, a god of the atmosphere.

“Anu, the god of gods, agreed that their labor was too great. His son Enki, or Ea, proposed to create man to bear the labor, and so, with the help of his half-sister Ninki, he did. A god was put to death, and his body and blood were mixed with clay. From that material, the first human being was created, in likeness to the gods.

You have slaughtered a god together
With his personality
I have removed your heavy work
I have imposed your toil on man.
…
In the clay, god and man
Shall be bound,
To a unity brought together;
So that to the end of days
The Flesh and the Soul
Which in a god have ripened –
That soul in a blood-kinship be bound.

This first man was created in Eden, a Sumerian word that means ‘flat terrain’. In the Epic of Gilgamesh, Eden is mentioned as the garden of the gods and is located somewhere in Mesopotamia between the Tigris and Euphrates rivers.”

According to cuneiform texts, the first successful human was named Adapa. The whole line of species was named Adamu. In this case, the similarity to the Bible is striking. A tablet discovered in the ruins of the ancient Babylonian city of Nippur in the 19th century by a team from the University of Pennsylvania also tells the story of a plan by the gods to destroy the world by means of a great flood and recounts the tale of an immortal man named Utnapishti, who builds a huge boat to rescue his family and every type of animal.

The Sumerian tablets emphasize that humans were not born like other life forms on the planet. Interestingly, an ecologist and environmentalist, originally from Wisconsin, USA Dr. Ellis Silver argues that humans are not from Earth. In his book entitled “Humans are not from Earth: a scientific evaluation of the evidence” he suggests that our species is not native to Earth and may have come from elsewhere.

He indicated that humankind was brought to Earth in the very distant past. He put forward his research based on several subjects. For example, chronic diseases that affect the human race like back pain, indicating it could be a sign that proves our species was formed on another world, with much less gravity. He also mentioned that humans have 223 extra genes that are absent in any other species on Earth.

1 thought on “Humans are not from Earth: a scientific evaluation of the evidence from Sumerian Tablets.”