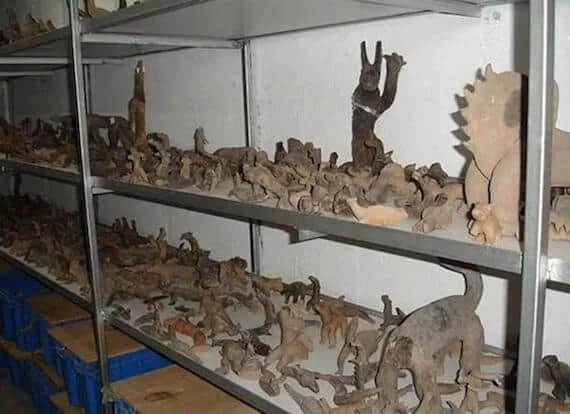 According to paleontologists and researchers, the dinosaurs got extinct around 65 million years ago and lived on Earth for 165 million years. It has been only 200 years since we found the first evidence of dinosaurs, but the figurines discovered in Mexico have a totally different perspective about what we learned about dinosaurs.

In 1945, not far from the Mexican city of Acambaro, a German amateur archaeologist and entrepreneur named Valdemar Julsrud found mysterious miniature clay figurines with the help of a farmer. These figurines

depict dinosaurs, humans, humans along with dinosaurs, hybrids of humans and animals, extinct mammals, and underwater inhabitants. The total number of discovered artifacts is around 30,000. But subsequent research has shown that the figurines may not be all that ancient.

According to the version of the archaeologist himself, he found the figurines during his horseback ride on the outskirts of Acambaro. Near one of the mountains, he allegedly accidentally stumbled upon one small clay figurine, a couple of hewn stones, and several fragments of ceramics. As more than ten years ago, the archaeologist took part in the excavation of the ancient culture of Chupikuara, he attributed the found things to this culture.

Then the archaeologist organized and conducted massive excavations at this site and was able to get out of the ground about 35,000 various ancient works of art. Most of the figurines depicted dinosaurs. Together with the figures, human skulls, musical instruments made of obsidian and jade, masks, horse teeth from the Ice Age, and even the skeleton of a mammoth were found in the ground. And then, there were figurines depicting all types of human races. Besides, the archaeologist began to buy the same artifacts from local residents: they sometimes found statuettes in the same random way.

The sizes of the figures range from 10 cm to 1.5 meters. Most of them were made of clay and stone. All of them depict some kind of dynamic everyday plots, in some of them you can even see seemingly light humor. Among the dinosaur figurines, both known and unknown species were found, for example, a dragon with wings. The figurines themselves demonstrate different spheres of interaction between humans and animals: from hunting to domestication.

The discovered findings were sent for research. As a result, scientists declared them a hoax. Firstly, the figures did not have any scratches or damage corresponding to their supposedly impressive age. Secondly, there was not a trace of archaeological work on them either, and after all, during any excavations, some accidental damage to artifacts always occurs. Thirdly, the figures were found in the mud dug holes during excavations. Although found in the same region, other ancient artifacts were extracted from the rock.

He also sent four samples to the University of Pennsylvania Museum to study them with the thermoluminescence method. In this study, the age of the figurines was determined as 2500 BC. But since it was 1969 and the method was just beginning to be mastered, all the first studies and conclusions were declared erroneous in 1976. Gary Carriveau and Mark Han conducted the same study on 20 of the figures but failed the plateau test.

Sbsequent analyzes established the approximate age of the artifacts: no more than 30 years.

At the same time, there are still those who believe in the “antiquity” of the figurines found by the archaeologist. They point to the fact that open firing, which the figurines have undergone, is an expensive process in this area. They also believe that when the locals sold them at a low cost, equivalent to ten US cents, that price could in no way justify the cost of their production. The third argument is that the stone figures do have traces of erosion on them, so they cannot be fake. The collection of Acambaro figurines can now be seen in the Waldemar Yulsrud Museum in Acambaro.