The apparent abduction of Corina Saebels is perhaps one of the most controversial and outlandish claims on record. Even within the UFO community, it would appear that opinion is very much divided as to whether the account is a genuine, horrific and ongoing ordeal, or whether it is one designed to generate income, fame, or both. 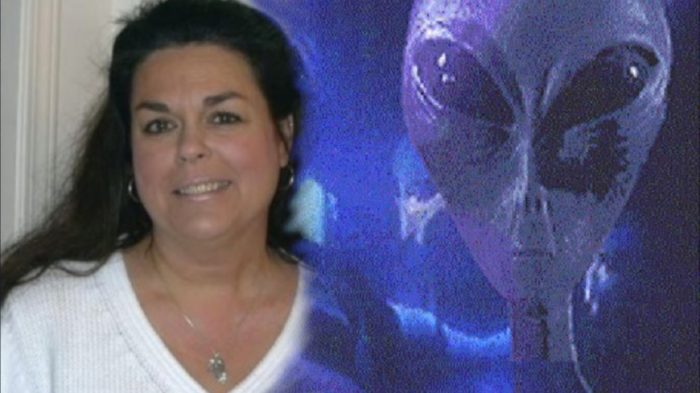 That isn’t to say that Saebels doesn’t offer proof of her encounters with the presence of physical injuries and “markings” of the experiences. And what’s more, many of the memories she has since recovered match many other similar claims of alien abduction. Right down to the chilling realization that such events likely begin with the abductee being a young child. As well as the fact that it also very likely runs through families going back generations.

“Once You Really Look, Your Brain Takes It In!”

According to her report, Corina Saebels and her friend, known only as Jane Doe, would make a last-minute decision to drive to a quiet spot in Glenmore in British Columbia, Canada, shortly after midnight on the 31st July 2003 so they could watch the stars. Although the traffic was relatively busy initially, especially for such a late hour, it would suddenly decrease shortly after they chose a spot to pull off the road.

While Saebels used the flashlight to highlight points above, her friend used the binoculars to scan the blackness above. Within only a few seconds she settled upon “three stars up in the sky” which were clearly in a strange “triangle shape”. The stars were extremely bright and a “solid white”. Then, they began moving, together, as one object.

The two women reasoned with each other that perhaps it was a plane. Of course, they quickly dismissed this idea. Planes didn’t stop and hover. And the lights were now “changing color to a neon green”. Then, it came to a stop once more, just above the now very lonely highway.

Saebels reached for the car headlights and switched them off. She would take the flashlight and swing its beam around the area around them. She was looking for any wild animals that sometimes lurked in the area. As the beam broke the darkness of the road ahead of them, and under where the lights were hovering both women could see “five sets of eyes” looking towards them. At first, Saebels told herself these were indeed a pack of wild animals. She would then state, though, “once you really look, your brain takes it in”.

In front of them, heading their way, were five creatures, around four-feet-tall with thin gray shoulders topping an equally thin frame.

A Strange “Electric” Feeling – Like Being “Zapped By A Charge From A Battery!”

A surge of fear rushed through Saebels. So much so that she began to struggle to breathe. She urged her friend to “get in the car”. However, as both women struggled to do so, everything “went into slow motion” – literally. Both felt as though they were “moving through quicksand”. Despite this, they eventually reached the car and slammed their respective doors shut behind them. However, the windows were “power operated” and so the engine had to be started to close them. Try as she might, the ignition wouldn’t catch, and the car remained idle.

Finally, amid all of the vehicle’s electrics “going nuts” the engine started. Saebels pushed the button to bring the windows up and then sped away from the area, turning around in the middle of the road and heading back the way they came. After several moments, they realized that increasingly more traffic was around their car. They asked each other where this sudden array of vehicles had suddenly come from. And perhaps most importantly, why there was no traffic only moments ago when the strange creatures were heading towards them.

Then, as she guided the car down the highway Saebels would state to her friend that she had the “weirdest feeling” as though there was “electricity” running through her body. As if “I was zapped by a charge from a battery”. Jane, more relieved that unnerved relented. She had the same feeling, as though she was “hit by an electric charge”.

However, when the two women suddenly noticed the clock on the car’s dashboard, they both froze momentarily. They had only been out of the car a matter of minutes – not even five. However, according to the time, almost half-an-hour had gone by. Time that neither woman could recall. 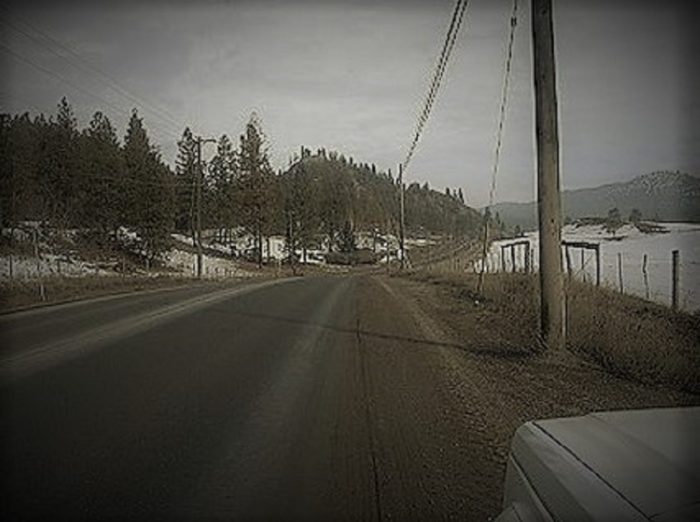 Scene of the incident

The two women would begin to discuss if they might have shared a strange hallucination. Or if they had simply imagined the whole thing. However, as they neared home, driving along a road next to a large field, the “glowing neon green ball” appeared again. This time, very low in the sky. It would move and then stop. Move and then stop. It would do this several times. Eventually, Saebels would bring the car a halt, although the engine remained running. Almost as soon as she did so, the object began to approach at rapid speed. Suddenly, it was directly over the top of their vehicle.

Saebels pressed down hard on the gas and the car sped away. Instead of remaining on the road, though, she would take the vehicle into an orchard, carefully negotiating the trees. Eventually, she brought the car to a stop. With no lights here and the car’s own power switched off, it was her hope that they could remain here unseen until the strange object moved on. Whatever it was.

They remained silent for several minutes. Then, Jane alerted Saebels to look out of the front window of the car. High above, there was not only one green light. Three of them now hovered overhead, their glow visible through the trees. At the moment, when the object moved, all the green lights would move together. However, after a short time, they appeared to separate, each moving independently of the others.

Taking their chance, Saebels turned on the engine and sped away. This time they would arrive at Saebels’ home with no further incidents. However, once there, they would make more startling discoveries.

After a short discussion of the night’s events, the two women would go to their beds and attempt to get some sleep. However, upon waking the following morning, they would discover strange markings and bruises on their bodies.

Saebels, for example, would find a large bruise on her left breast. Furthermore, after feeling discomfort, she would find a similar one on the underside of her foot. Both were extremely painful to touch. While the two women sat drinking coffee shortly after waking, Jane exclaimed how “rough” she felt that morning. Almost in sympathy with her words, a stream of blood came from her nose and on to the table below.

As her friend pressed a towel to her nose, Jane also claimed her lower back was in a lot of pain. When Saebels examined it, she discovered a “circle burned into her skin” in the lower, middle back area. After informing Jane of her own bruise marks, they further examined Jane’s body. They discovered similar bruising to Seabels’, but also “three strange finger marks” on each of her thighs.

Incidentally, Jane was visiting Saebels from nearby Abbotsford. In light of the recent events, she would decide to head home several days early. Upon arriving back home she would see her local doctor regarding the still constant back pain. When examining the strange burn mark on her back he would claim it to be similar to a “radiation burn”. According to Saebels, her friend still has problems with this. 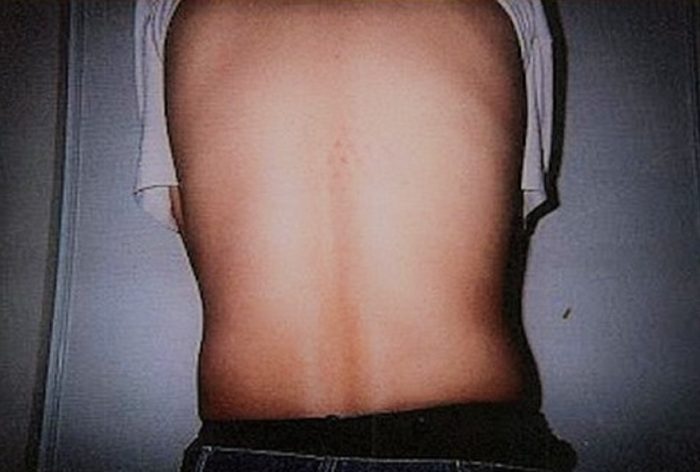 Triangular markings on Saebels’ son’s back

When Saebels’ 18-year-old son came to stay with her several months after the sighting, she would notice something on his back that would fill her with horror. Something that would not only cause her immediate concern but would remind her of her own experience as a young child. On his back was a bizarre “triangular mark” with strange circular marks within it. When she was 12-years-old, she would notice, one random morning, that a similar “scoop mark” was there on her leg. She couldn’t help but feel the markings on her as a child and those on her son now were much more than coincidence.

What made her even more concerned was when her son was only nine, a “small hole” was discovered in his spine due to a mystery infection. One that would take months of antibiotics and treatment to combat. With this in mind, she would take her son to seek medical attention regarding the strange scoop marks on his back. However, despite intense examination, the doctor could provide no explanation for the marks. Or their sudden appearance. Interestingly, Saebels would notice how that morning, when leaving the house, she had noticed how the tops of the trees near her home were “yellow like they were slightly burnt”.

It would seem, like many other cases of “repeat abduction”, if we accept without question the account is genuine for a moment, that her son is subject to the same abductions by the same extraterrestrials. It is highly likely that Saebels’ own parents, and perhaps even theirs before that, also experienced such incidents. Whether or not they were aware of, or even acknowledged them. It is a detail that suggests monitoring of certain bloodlines, genes, and entire generations of families. Of course, for what purpose, remains unknown.

A Corroborating Account In A Sudden Surge Of Sightings

What is also of particular interest here, is that UFO sightings in British Columbia, much like Canada as a whole, were at their highest levels for years. Furthermore, in the final days of July and very early August 2003 in the British Columbia area, a sudden surge of UFO sightings occurred. It is not too much of a stretch of the mind to think that Saebels’ and Jane’s apparent abduction occurred during this wave-within-a-wave of UFO sightings.

One particular sighting involving a resident from Kelowna – where Saebels resides – stands out somewhat from the rest. She claimed that on the evening of 31st July 2003, she had gotten out of bed at some time after midnight from not being able to sleep. It was particularly warm that evening, so she went outside into her yard for some fresh air. As she was looking at the night sky, she focused in on a bright light that at first appeared to be a plane. However, she quickly realized it didn’t move like a plane.  Furthermore, it was an “almond shape” and glowed a “luminous green” color.

She also noticed, bizarrely, that while only moments earlier she could hear all the usual sounds of the night – coyotes, insects, and even distant traffic – as the glowing, green craft went across the sky, everything became absolutely silent. It was, she would later describe “as if someone had clicked off a switch”.

Obviously, the times, details (glowing green light) and locations of this particular sighting, made completely independently of Saebels’ own report, matched almost exactly the time and location of her and Jane’s apparent abduction encounter. That the area had several other reports around this time would appear to add more credence to Saebels’ account.