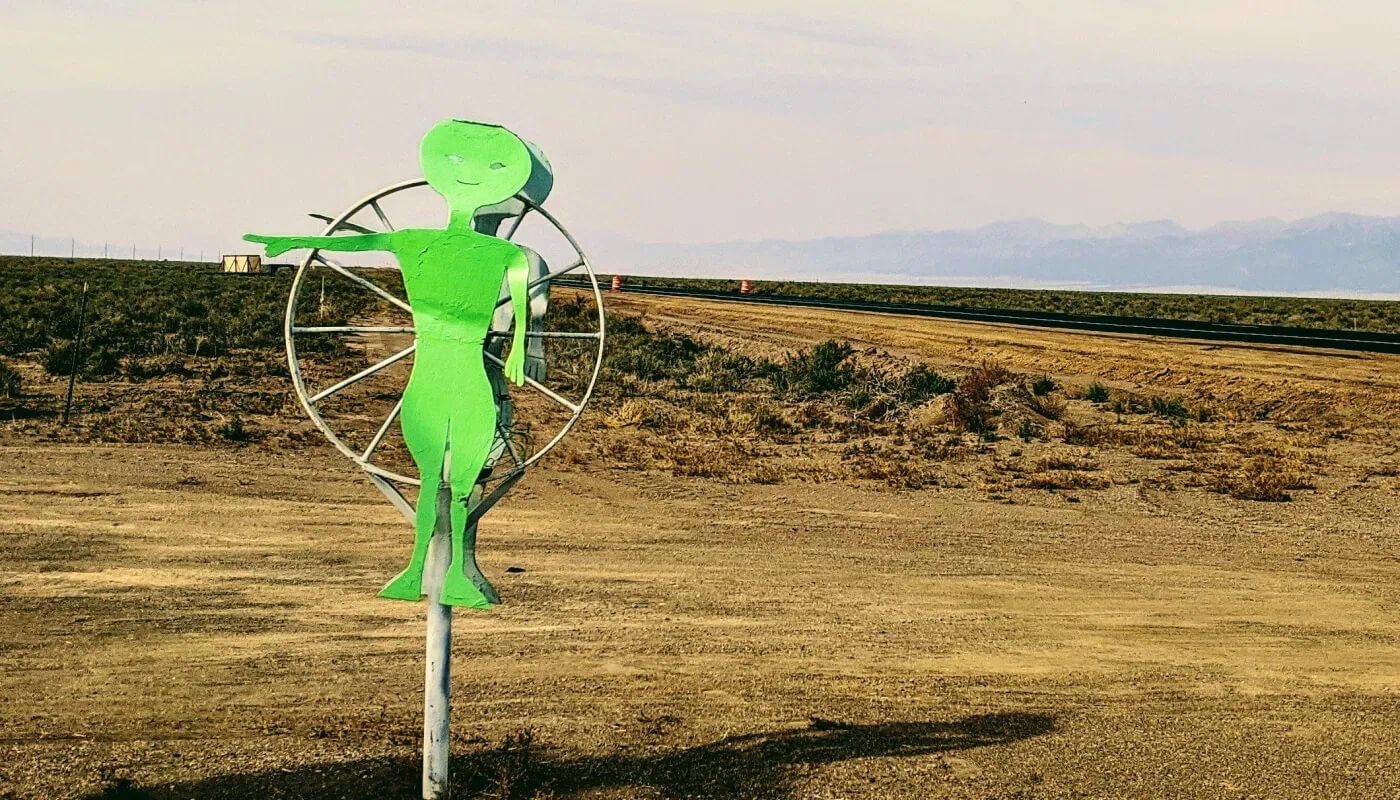 There are many places around the world with a phenomenal number of UFO sightings and unexplained phenomena. One of them is located in Colorado and bears a simple self-explanatory name: the UFO Watchtower.

San Luis Valley is a large plateau, measuring over 65 miles wide and 125 mile long, bordered by mountains all around. At the altitude of over 8000 feet, this is one of the highest deserts in the world.

It’s no wonder that the UFO Watchtower happens to be right in the heart of this mysterious valley. For centuries the place was a center of so much unexplained activity, that the local Ute Indians considered it a sacred ground. Later the valley became a hotspot for all kinds of the UFO encounters, covert government appearances and very strange events.

Cattle mutilation stories were something that piqued the interest of Ufologists for a while and raised a lot of interest in this region. It started in the 70s, when local ranchers reported over 200 cattle mutilations. One of the most known cases is of Manuel A. Sanchez, who found his four cows dead in the way he couldn’t explain. Certain organs such as eyes, tongues and genitals, and parts of the skin were surgically removed.  No predator could have done it. There were no car tracks or any other evidence of humans. Another famous case is of a horse named Lady (later renamed into Snippy). The poor animal was cut so precisely, it was clearly done by a sentient being with a definite purpose in mind. The witnesses reported strong acetone smell hanging in the air.

Who could have done such a barbaric act and why? Ever since, the cattle mutilation cases remain unexplained. Many Ancient Alien Theorists conducted extensive study of the events and came to some astonishing conclusions.

The locals, however, think it’s the government’s work. They claim there are witnesses who saw a Black Hawk government helicopter throw a cow’s body out. So, the truth about who is doing it and why is still out there…

UFO Sightings in this Area

Ever since Native Americans occupied the San Luis Valley, there were multiple accounts of strange lights, metallic objects that moved, defying all laws of physics, and even cases of abductions! Ute and Navajo Indians believed that Blanca Peak, the highest peak of Sangre de Cristo Mountains, was sacred. It is not the first time that sacred spots of the Native Americans have high UFO activity. Something must have been going there for centuries.

But if we think of the places that are favored by the ETs in the world, San Luis Valley appears to be a perfect location.

The History of the UFO Watchtower

Judy Messoline, the creator of the UFO Watchtower, was skeptical when she first moved to this area. In fact, she didn’t think about UFOs at all. She came here to breed cattle, but the business didn’t have success. In the meantime, she had multiple sightings herself, over 40! Needless to say, the experience turned her into a firm believer. So, after talking with tourists, who kept flocking into the area, she had the idea to build something that could connect UFO enthusiasts, as well as make use of her land. So, in 2000, she built a large elevated platform and called it the UFO Watchtower. It immediately became a popular hotspot with professional UFOlogists and tourists alike!

With time, more and more people came. Once, Judy had a visit from a psychic, who told her something incredible: there is an anomaly in the direction of the Sangre de Cristo Mountains. There are two inter-dimensional vortexes, one spinning clock-wise, the other one spinning counter-clockwise. At the bottom of each vortex there is a being that guards the entrance. I wonder if the ETs decided it was important to create those to watch the people, who are trying to communicate with them… Can it be evidence that they are ready to make contact?

Believe it or not, people who meditated under the vortexes claimed to have felt a strong energy field. It jump-started a tradition: to leave something for the extraterrestrials, to manifest friendship, good intent and get some good luck back. So, year after year, a unique meditation garden arose, consisting of different objects that people left behind. Yes, for the uninspired eye it looks like a pile of garbage, but strangely, you do feel elevated being there.

How to Have the Best Experience at the UFO Watchtower

There are several ways to visit the UFO Watchtower. You can visit during the day. It will cost you $2 per person or $5 per car. If there is no one around, you can simply drop the money into one of the boxes attached to the walls. But the best thing is to stay the night. To accommodate her guests, Judy Messoline built a campground around the tower, where you can either camp with a tent or bring an RV.

The Campground costs $15 a night on first-come first-served basis. The land at the foot of the tower is separated into individual sites. There are no hookups, but the sites are large and leveled. Each site offers a table and a fire barrel, and some spots have fire rings. For primitive campers there are several port-a-potties installed on the premises.  Please note that during extremely dry conditions the State of Colorado issues a state-wide fire ban, so, if you are visiting during these times, dress accordingly! At this altitude, it may often be cold at night and it feels even colder without a fire! Please be respectful and take your trash with you! Apart from these common-sense rules, just have fun.

A Weekend at the UFO Watchtower

One thing for sure, it is definitely a no-judgment zone. No matter what you believe in, whether you are human or from Sirius, you will be welcomed with open arms. October is considered winter season and Judy opens the store only on weekends. So, we decided to plan our arrival for Saturday afternoon to maximize our experience. After a quick set up, we went to the shop. There were several day-visitors and kids joyfully ran around the shop, playing with cute alien toys. We made some pictures around fun ET figures and it quickly broke the ice.

You might also like:  Is the Bimini Road in the Bahamas a Part of the Lost Atlantis?

Judy was super-hospitable and told us a bit about the tower. There was a thick journal on the counter. “Oh, this is if you see anything,” she said. “Since the Tower opened in 2000, we had over 300 sightings and all of them are documented right here”. I couldn’t hold the excitement browsing through the pages. Hundreds of handwritten first-hand testimonials, photos, drawings…

It was a full moon while we were there. So, to see better, we went to bed and woke up about 3 am, when the moon finally set. This was our first experience in truly dark skies since the beginning of our RV Trip. Like a big starry road, The Milky Way crossed the sky in the middle. Simply WOW.

We grabbed some wine, chairs and blankets and went up the stairs. The best way to see any UFO activity is if you direct your gaze towards the Sangre de Cristo Mountains. This is where the action is! We didn’t see ETs, but stars were incredible and the night magical. We also witness a beautiful meteor shower!

The next day we had some fulfilling conversations with other campers, visitors and Candace Knowlan, who was running the shop on Sunday. She happened to be a very interesting lady, who dedicates her life to preserving trees for future generations by participating in a global project called Trees for Peace. And yes, she also saw nearly 30 UFOs and even telepathically communicated with some. She assured me that they bring only peace.

The next night was pretty uneventful due to strong ice-cold wind that ran all the primitive campers out of the campground. I stayed near our RV that night. And even though I didn’t see any apparent UFOs that night either, I thoroughly enjoyed the beautiful sky and finally got to play with my telescope.  Next morning, before saying goodbye, I also left a small souvenir for the ETs and promised to come back during warmer nights. This way I can stay out all night and maybe be one of those three hundred lucky eye-witnesses!

How to Get to the UFO Watchtower

If you are driving Hwy 160 either from east or west, take Hwy 17 north in Alamosa towards a town called Hooper. In about 30 minutes, right after Hooper, the UFO Watchtower will be on the left. You can’t miss it: a green alien figure welcomes you in!

Make sure you have everything, such as food, drinks and firewood with you: there is a small convenience store in Mosca, but most of the shopping can only be done in Alamosa. While you are in the area, visit the Great Sand Dunes National Park, Colorado Gators Reptile Park, Alamosa National Refuge and Zapata Falls.

And have you been at the UFO Watchtower? How was your experience? Do you think San Luis Valley is a place where you have a high chance to spot extraterrestrial craft? Share your thoughts in the comments!

Did you find this interesting?

Aliens Around The World