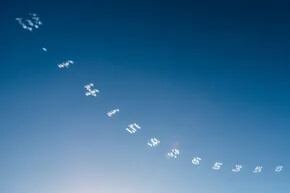 Pi in the sky (over Austin, March 2014). You can tell by looking at all the dots forming the numbers that this message was executed with skytyping.
© Jim Bennett/Corbis

It sounds pretty newfangled, but digital skywriting, or skytyping, has been around since the 1940s [source: Skytypers]. There are similarities between skytyping and skywriting. They both start at 10,000 feet (3,048 meters). They’re dependent on weather conditions. They generate a similar finished product, though a skytyped message looks a bit neater (think “handwritten” vs. “typed”). And they use the same smoke-producing fluid and machinery. But in the case of skytyping, a computer program triggers the injection of fluid into the exhaust, not the pilot.

The writing processes are quite different. For one thing, skytyping uses multiple planes, typically at least five [source: Encyclopedia.com]. And there are no aerial acrobatics. The only fancy flying involved is formation flying: The planes fly side by side, equidistant and at the same altitude, for the entire time it takes to write the message.

The letters are made up of individual dots that blend together at a distance. Emitting the dots is entirely automated. A message is loaded into a computer that controls the smoke-emitting machinery in each plane. The program tracks the locations of every plane as they fly. Whenever a plane reaches a point where a dot should be placed, the computer triggers a burst of smoke from that plane.

The entire formation flies a predetermined distance, shifts position and then makes another pass to lay the next line of smoke dots. The passes continue until the message is complete.

Skywriting is experiencing a comeback in the 21st century. “Businesses are seeing the advantages there are with skytyping,” says Cristina Domi. It’s more flexible than “longhand,” allowing for a more immediate, integrated experience. Since it’s all centrally controlled, a message can be written or changed on the fly. Imagine skywriting the names of Oscar winners as soon as the envelopes are opened, or writing hashtags as the social-media response to a new iPhone unfolds.

But perhaps the best explanation for the surge in popularity is simpler: Skywriting offers more exposure than it used to. Now, physical visibility is moot. A skywritten message can be texted, tweeted or Instagrammed around the world immediately. And because it has novelty value, it typically is. Like TV ads, skywriting is now in people’s homes. Or at least in their phones.

Social media’s got it hands on the lost art. It’s a wonder there are any skywriting secrets left to keep.

Not all of today’s skywriters are intent on keeping the lost art’s secrets. Some pilots and contractors seem to share pretty openly. Still, there appears to be something to Steve Oliver’s comments about secrecy. I had a hard time finding detailed information on the smoke-producing “machinery” and the exact composition of the “paraffin-based fluid.” And it’s worth noting that Oliver gave a warning about the information that is out there: In the past, he said, skywriting pilots were known to provide false information to throw off their competitors. I believe I got it right. But if Oliver is to be believed, who knows. Or maybe Oliver is providing false information about providing false information …